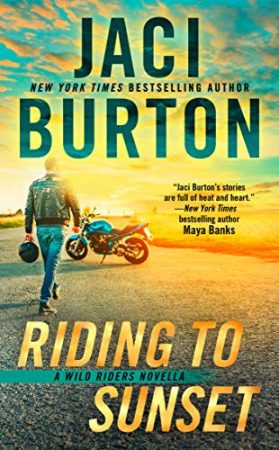 Jed Templeton is one of the newest Wild Riders, and anxious for adventure. He doesn’t expect to be tasked for a personal mission by his boss General Grange Lee. When he discovers the job involves safeguarding the general’s niece, Jed realizes the stakes have climbed as high as they’ve ever been.

Elena Madison has her life just as she wants it—a successful career running her gallery in Daytona Beach. And if her love life is a little thin, that’s okay. But when a sexy biker walks into her shop and asks her out, fiery passion erupts—followed by a series of burglaries and near attacks, turning her life upside down. Now she’s on the run with the man who lied to protect her, a man she thinks she’s falling in love with…

Jed’s found the woman he wants to spend the rest of his life with. Now he has to keep Elena alive long enough to prove to her that love is always worth the risk.

Riding to Sunset: Book 6 in the Wild Riders Series

“Survived the latest mission, huh? Did Diaz hold your hand so you wouldn’t be scared?”

“I’m pretty sure Diaz said that Jed was afraid of the dark.”

“I give him a year and he’s going to run back to the FBI, tail between his legs.”

Jed Templeton cracked a grin, not at all insulted by the ragging he’d been getting from General Grange Lee’s crew of veteran Wild Riders. On the job for about a year, Jed was still the new guy. And when you were the newest of any crew, you took shit until you proved yourself.

He dropped his bag and headed into the kitchen of Wild Riders headquarters to grab a beer before moving to the living room, where Mac, Lily, Diaz, Jessie and Spence were huddled up watching a football game on the big-screen TV. He grabbed one of the available seats, unscrewed the top off his bottle of beer and propped his booted feet onto the scarred table.

“So?” Jessie asked, leaning forward to clasp her hands together. “Diaz said it got rough.”

“He would say that, being a pussy and all. I had to do most of his job for him, but I’ll cover for him when I file my report to the general.”

“So really, Diaz, how did he do?” Mac asked when the commercial came on.

The room went silent except for the sound of a manic announcer on TV, selling car insurance.

Diaz shot a glare to Jed, who smiled at him.

Diaz shrugged. “He can hold his own. Kicks ass in a gun fight and hand to hand. He’ll do all right.”

The rest of them nodded and tilted their drinks in his direction. He nudged his bottle of beer toward all of them, and when the game resumed, they argued over teams.

That was it. With Diaz’s endorsement came acceptance.

Lily came over to sit next to him on the two-person love seat. She laid her hand on his forearm. “It’s hard to dig into this group,” she said. “I was the first, and a woman at that. When I joined, I had to prove myself. So did Shadoe. Even Jessie, though she’d been mostly brought up here, had to prove she could hack it on her first assignment. We all have our trial by fire.”

“I did not hear that, Spencer,” Lily said. “You don’t want to upset me and my hormones.”

Jed leaned back and cocked a brow. “A baby, huh?”

She grinned. “Yeah. Mac and I are having a baby.”

His gaze shot to Mac, who grinned. Jed lifted his beer. “Congrats to both of you.”

“Thanks,” she said. “Hence the reason for all the mad recruiting the general has been doing over the past year. With a lot of us getting married, and now Mac and I having a baby . . . obviously I’ll be taking some downtime—”

“Retiring,” Mac said again, his gaze focused on the game.

She rolled her eyes. “We’re still discussing that part. Anyway, we’re so glad to have you on board, Jed. Diaz already told us you did a great job on the Montana assignment. How do you like working for the Wild Riders?”

She laughed. “You’re going to have to loosen up, Jed. I promise we don’t bite.”

Jed shook his head. “Are all of you paired up?”

“Yes,” Lily said. “Like I said, that’s why the general needs some new blood. Some of us are moving on and out and it’s time for the next generation. That’s you, Jed.”

He didn’t know about the whole “next generation” stuff, but he liked the job. It was adventure, it took him around the country, and it beat the hell out of the boring shit he’d done for the FBI. When General Grange Lee had recruited him, he’d jumped at the chance to have a little more leeway in what he did for a living, while still doing a service for his country.

For the past year the general had trained him, put him through grueling eval. Then the general had let the other guys run him through maneuvers and practice scenarios, which meant time out here at headquarters in Dallas. He’d gone on a couple light assignments, nothing major, followed by the big one with Diaz—a harrowing undercover in Montana.

It had gotten ugly. He and Diaz had gone full throttle when the bullets had started flying. They’d taken down a group of survivalists, pulled in all the gunrunners and tied up the mission with a bright red bow. And hell, he’d done it all in his leathers and riding his Harley.

He liked this job.

He stood when the general came in. “Sir.”

“First thing, I keep telling you not to call me ‘sir.’”

Spence snickered. The general shot Spence a look that would freeze the devil in hell.

“You want dishwashing duty for the last month you’re working with me, Spence?”

“Then mind your own fucking business.”

“You got it. Minding my own fucking business here, Grange.”

Jed got up and followed the general to his office, shutting the door behind him. He stood and waited while the general took a seat.

Grange rolled his eyes. “You’re not in the military anymore, Jed, and neither am I. And I’m getting tired of reminding you. You don’t salute me, you don’t stand at attention, so just relax. Call me Grange or General. I don’t give a shit. But pull the stick out of your ass and sit the hell down.”

Jed pulled up a chair in front of the general’s desk.

“You know, kid, I get that you thought you were going to be career military, and that you went straight from two tours in the Marines to four years with the FBI. And you suffered doing nothing with the G-men because they’re stick-up-the-ass regimented asswipes, but here we’re more relaxed and nobody jumps unless I’m pissed off. And when I’m pissed off, Jed, you’ll know it. Understood?”

“Good. Now, for your next assignment.”

Thank God. The last thing Jed wanted was downtime. He was ready to go.

The general clasped his hands together. “This one’s a little different. I want you to fly to Florida. Daytona Beach. Your target is Elena Madison, age twenty-six.”

“You’ll be undercover. Sort of.”

Jed cocked a brow. The general raked his hand through his hair. “It’s hard to explain. I know Elena’s mother, Carla. She’s gone missing, but Elena doesn’t know that.”

“Yes. Carla has always been sort of a free spirit, very New Age. Kind of a hippie, back when hippies were the thing. She comes and goes as she pleases, takes off whenever she feels like it.”

“So Elena wouldn’t think anything of it if her mother was gone.”

“But you—being friends with Carla all these years—have kept tabs on her.”

Grange nodded. “You could say that.”

“How do you know she’s missing?”

Grange stood, rubbed the back of his neck and turned to look out the window. Jed could tell he was uncomfortable as hell. Obviously having some kind of personal relationship with this Carla was doing a number on him. From what he knew of the general, he left his personal life out of all his dealings with the Wild Riders. Why he was giving Jed this assignment, he didn’t know. But he was going to be patient and listen.

Whatever was between Grange and Carla Madison, it was something deep and meaningful, or at least that’s what Jed was taking away from that comment. “Okay. Have you . . . lost her before?”

“On occasion, but I always pick her back up. This time I haven’t been able to.”

“Oh.” Well, hell. How was he going to do this mission without stepping on the general’s toes?

“Ask your questions. Nothing’s off-limits. I’m not going to send you into this blind.”

“Who is Carla Madison, General?”

He blew out a deep breath. “She’s my sister.”

“Okay, which means Elena is your niece.”

“Elena doesn’t know about me.”

“Because we didn’t want her to.”

“I know I’m her uncle, dammit. But I’ve kept my family away from who I am and what I do because of my lifestyle and career choice. My enemies. It would make both Carla and Elena targets.”

Jed nodded. “Okay, that I understand. Tough choice for you.”

“We need to find out where Carla is, and keep Elena safe.”

Now the light was beginning to shine on this mission. “You think one of your enemies has figured out that Carla is your sister and has targeted her?”

“Possibly. I don’t know and won’t until I get down there and try to find her. But I can’t go hunt for Carla and protect Elena at the same time. So I need you to help.”

“Why me, General? I’m the new guy. Why not one of the others?” This was a pretty deep secret to share with the most recent recruit.

“Because I haven’t told them this secret. And because they’ve built up relationships with each other and stand to lose a lot if this goes wrong.”

Now he got it. He didn’t have the ties they all had—they all had someone to love. He was a loner, and therefore the easiest to take along on this assignment. “Understood.”

“I knew you would. Pack it up, we’re leaving in an hour. I’ll fill you in on Elena on the plane down there.”

The general’s niece? And she didn’t know?

Yeah, this one had no-win scenario written all over it.