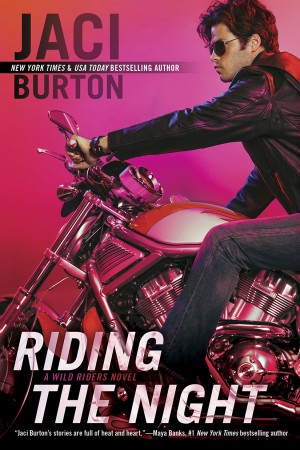 AJ and Pax stop at a bar to give AJ a chance to see old friends—including Teresa, his high school girlfriend. They hadn’t expected to end up in the middle of a brutal fight between two rival biker gangs, leaving one man dead and Teresa’s brother wrongly accused of murder. With no proof and Teresa as the only eyewitness, the trio points their Harleys toward the annual bike rally in South Dakota and burn up the asphalt in hot pursuit of the real killer…

Her life in jeopardy, Teresa has found two fierce protectors in AJ and Pax. And more. Much more. In their arms she discovers a sensual desire that knows no boundaries, a passion strong enough to overcome her tragic past and awaken a force that brings both men to their knees. Danger may have temporarily bound the three together, but it’s their shared passion that will drive them on the most exquisite ride of their lives.

Riding the Night: Book 5 in the Wild Riders Series While AJ and Pax sat quietly drinking their beers, Teresa studied them side by side. AJ, with his dark good looks and smoky gray eyes, had always made her heart tumble. He had that sexy, bad boy quality about him that would make any woman look twice. Pax had dirty blond hair that he wore short and spiked, a dark goatee lining his jaw, his body all lean muscle, the kind of body a woman would want to run her hands all over. The two men were a study in contrasts—so different and yet so similar. Both screaming masculine and sexy, commanding a woman’s attention in ways that were elemental and yet inexplicable.

And she suddenly pictured herself between those two men, their hands gliding over her naked body, their lips pressed against her skin. Being sandwiched between them, touching them in turn, allowed access to their bodies, sliding down to worship their cocks—first one, then the other. They stood still and allowed her to touch, to taste, and only when she’d satisfied her curiosity did they pull her up and turn her face to each of them and kiss her. She wondered about their mouths, their tongues, the different tastes and textures, what it would be like to have that sensation of both of them kissing her, both of them doing . . . everything to her, with her.

Heat settled between her legs, a pounding ache and awareness and need that hadn’t been there in far too long. Her breasts felt full and her nipples tingled. She blinked and looked in the direction of the men of her fantasies, and found both of them staring right at her.

They knew. Somehow they knew what she’d been thinking about. It reflected back to her as they looked at her. AJ’s eyes had gone even darker, a storm on the horizon as his gaze locked with hers. Pax’s gaze was molten heat, all directed at her in a blast as hot as this August summer.

She should look away, move, get out of the room. But she was melted to the chair, unable to break the spell that tied her to these two men. And when Pax stood and moved toward her, her heart knocked against her chest, but it wasn’t fear shaking her—it was desire, curiosity, the need to continue to experience the sensations and emotions she was feeling.

Instead of looming over her, he dropped to his knees at the side of her chair. Teresa inhaled the scent of leather, of sweat, of man. She wanted to reach out and trace her fingertips over his goatee, but she didn’t, her hands gripping the chair arm so tight her muscles protested from the effort.

Pax smoothed his hand over her head, down along her hair, gently reaching the ponytail holder and drawing it down, releasing her hair. He didn’t say anything, just slid his fingers through her hair, draping some of it over her shoulder. There was nothing he did she considered out of bounds or dangerous. Except the look in his eyes, the deliberate sensuality she saw there—which he let her see—screamed danger at the highest decibel level.

She heard AJ rise from the couch. From the corner of her eye she saw him move toward her—toward them. He slid to his knees in front of her chair and laid his hands ever so lightly on her legs, pressing in just enough so she knew he was there.

Oh, she knew he was there. She was surrounded by two men who had awakened her libido to a screaming frenzy.

But could she do anything about it? Did she dare?

“There’s something you want that you’re denying yourself.”

Teresa shifted her gaze to Pax. She swallowed, her throat so dry she was afraid she wouldn’t be able to speak.

AJ slid his hand to her knee. Easy, a nonthreatening touch. “You’re skittish. Do we scare you?”

She turned her focus to AJ, forcing the words out. “No. You two don’t scare me at all.”

She felt the movement of Pax’s hand against her neck, lightly teasing her hair, massaging the tight muscles there. He leaned in and his breath caressed her ear. Her chest tightened as he pressed a kiss to her neck. She closed her eyes as desire flooded her.

AJ moved his hands further along her legs, light and easy movements, his fingers dancing along the denim to her ankles. He pulled her feet out from under her and let her legs drape over him, rubbing her calves with his strong fingers while Pax slid his tongue along her throat. Her breasts strained against her bra, her nipples tight with agonized pleasure. She fought for breath as delicious sensation danced along her nerve endings.

She wanted this so much, yet even as she did, the images assaulted her. She was on the ground and someone was spreading her legs, holding her down, tearing at her clothes. She fought to get away.

The heat and delicious sensation shattered as cold fear took hold of her.

Anger battered her, that even now, five years later, it still haunted her.

“I can’t do this. Not yet.” She pushed and AJ released her, Pax backed away. Teresa stood and turned to them. “I’m sorry. I’m sorry.” She couldn’t even look at them, had to get away. She went to her bedroom and shut the door, felt foolish even as she locked it, but couldn’t help herself. She still needed that barrier of safety between her and them.

Between her and men.