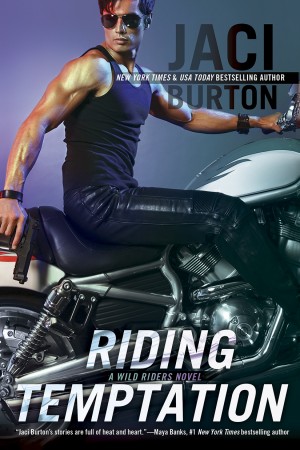 Ever since runaway Jessie Matthews teamed up with the gang of special ops bikers, the guys of the Wild Riders have thought of her as their kid sister. Except for Diaz Delgado. Over the past few years he’s been watching the budding of a ripe young woman. Jessie’s glad somebody finally sees her for who she is—and she’s thrilled it’s Diaz. His dark good looks and killer body have tempted her since day one.

Diaz’s unbrotherly urges have been hard to fight but the last thing he’d want to do is hurt Jessie and break up the gang. But when they both go undercover to infiltrate a group of killer survivalists, he knows it’ll be hard to keep his distance—especially when the mission takes a risky turn. Now Diaz has no choice but to open himself up to the one woman who may be strong enough to take him on. She didn’t say anything for a few minutes, but then he heard her move behind him, her breasts once again pressed against his back as she studied the laptop screen. He sucked in a quick breath, heat surging through his veins.

Christ. Just being near her sent his nervous system haywire. And she thought of him as a brother. He was such a fucking pervert. He had to get her out of his room.

“I think I can finish this up now.” He shut the lid on the laptop and pushed the chair back, forcing her to move away from him.

Jessie backed up a couple steps, a confused frown on her face. “That’s it? You’re done with your research?”

“Yeah.” He moved to the door, hoping she’d follow.

He hovered near the door. Come on, Jess. Get the hint.

She walked toward him. He watched the way she moved. So graceful, so slow, so seductive. She stopped in front of him, tilting her head back to look him in the eyes. Her lips were parted a fraction of an inch, revealing just the tip of her tongue as she studied him.

He was beginning to sweat. His cock twitched. His heart pounded.

Fuck. He wasn’t seventeen. He was thirty-one goddamn years old, too old to let a young woman affect him this way.

She inched closer, so close that the tips of her breasts nearly brushed his shirt. His knees almost buckled.

“Why are you so afraid of me?”

He tilted his chin down and stared at her. “What?”

“You’re afraid of me. It’s obvious. You’ve been avoiding me for years. You never talk to me. I enter a room, you leave. I try to talk to you, and you mumble a few unintelligible phrases, but otherwise, you won’t engage and then you make up some excuse to get away from me.”

“Fine then. And I’m five-six, so you’re almost a foot taller than me. And you have to outweigh me by over a hundred pounds, if not more, so I don’t think my mere presence scares the shit out of you.”

Darlin’, you have no idea.

“I just can’t figure out what it is about me that makes you keep your distance.”

She moved in on him, and he backed up a step.

“Otherwise, you wouldn’t be backing away from me. So, see, I’m right. You are scared of me.”

“I’m not afraid of anything, or anyone.”

A small smile teased the corners of her mouth. “That kind of false bravado could get a guy killed in our line of work. Everyone is afraid of something. With me, it’s cliffs—looking over one and that fear of falling. Gives me a vicious case of vertigo. Oh and I hate spiders in a major way. A girlie thing, I know, but I can’t help it. And I’m really not too keen about sleeping alone in the dark. I like a light on. So what about you? What scares you?”

He flattened his back against the door, but Jessie kept coming, pressing her palms against his chest and leveling him with a teasing grin. “Nothing except me. Big bad Jessie scares you.”

She did. She had to. There was nowhere else to go unless she climbed up on him. He smothered a groan at the visual that presented. Naked, her full breasts pressed against his chest. Her legs wrapped around him, his hands filled with her sweet ass as she bounced up and down on his cock. Her pussy would be wet, tight, gripping and squeezing him until he shot loads of come inside her.

He inhaled. Big mistake. The scent of her filled the air around him. Intoxicating, sensual. He went hard in an instant.

Her eyes went smoky. “I’m not a little girl. And I like a little heat, Diaz.”

Invitation was written all over her face, her body. Tempting. Oh, so tempting.

But that’s not what they were here for. And this was Jessie, not some random woman to fuck. It was Jessie. He had no right. She belonged to all of them. All the Wild Riders. All the guys who counted on him to take care of her. Because they all loved her.

He grasped her by the shoulders, taking in and memorizing the small surprised gasp she made. He wanted to put his lips on hers, to swallow her gasp, to slide his tongue inside her mouth and taste her.

God, he wanted that bad.

He pushed her back the few inches it took to open the door and set her on the other side of it.

He shut the door in her face, not hearing as she opened her mouth to speak. He threw the deadbolt, feeling like a coward, which he was. He turned around and leaned his back against the door, blowing out a breath.

Not afraid? Yeah, right. Jessie had called it right. She scared the shit out of him.

It took him a few minutes to regain the ability to breathe normally.

One woman. One small woman and she sent his entire nervous system haywire. He should be able to handle her, to ignore her. But he couldn’t, because one look at her, one whiff of her unique scent and he was like a freakin’ bloodhound, salivating and on the hunt. How was he going to do this assignment, be an effective leader, with Jessie under foot? How was he going to remain immune?

He dragged both hands through his hair, pushing off from the door to pace the small confines of his room.

Priorities. Taking down the gun runners was his objective. He’d have to compartmentalize Jessie to that place in his mind where she didn’t exist. Or jackoff a lot while he was alone, to ease the stress of having her near. His cock twitched, aching for touch, but it wasn’t his hands it wanted. It was Jessie’s. Her hands, her mouth, her pussy.

Tough. His dick was just going to have to suffer, because he wasn’t going to fuck her. Even though it seemed she’d wanted that tonight. She’d put one hell of a move on him. Any other guy would have taken what she’d so obviously offered.

She was playing a dangerous game with him. But Jessie was a kid. She didn’t know what she wanted. It was going to be up to Diaz to show restraint.

He groaned. This assignment was going to be like a long ride into Hell.

“Riding Temptation is the second novel in Jaci Burton's Wild Riders series and is yet another winner by this prolific and talented author. This story grabs the reader's attention from the first page and doesn't let go until the last... The love scenes between them moved seamlessly from scorching hot and sensual to loving and tender. This is a couple that the reader really wants to see have a happily ever after. Riding Temptation is a fantastic novel.”

“Riding Temptation has it all – action, suspense, romance, and sensuality all wrapped up in a story that will keep you on the edge of your seat and have you clamoring for the next story in the Wild Riders series!”

“This sequel to Riding Wild is exciting and loaded with action. It's full of intrigue, sexual tension and exhilarating release. Definitely a must-read.”

“The second novel in the Wild Riders series is a sexy, fast-action thrill ride! Every interaction between the central characters is infused with passion and sexual tension. The story focuses on the protagonists' struggle to become a couple and the conflict that surrounds their undercover mission. With its well-developed characters and enthralling plot, readers will be drawn into the romantic and suspenseful storyline.”