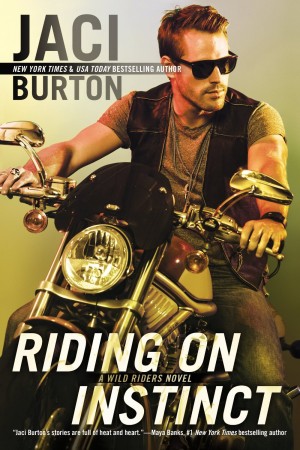 Department of Justice agent Shadoe Grayson is out to prove she’s no rookie, and eagerly accepts her first undercover assignment at a strip club in New Orleans. Working with the Wild Riders, a government agency of bad boy bikers, her goal is to expose a corrupt DEA agent. All she has to do is learn to take if off like a pro…

Standing in Shadoe’s way is arrogant Spencer King, her partner and one of the Wild Riders. Spence thinks she looks more like a schoolteacher than a stripper, and doubts she can grind her way to success. But when he challenges Shadoe to a personal show, he finds out there’s more to the surprisingly sexy agent than by-the-book rules. Now Spencer has to resist his baser instincts while Shadoe learns that stripping yourself of all inhibitions doesn’t always equal losing control…

Riding On Instinct: Book 3 in the Wild Riders Series “Let’s stretch a bit, then we’ll get to movements,” Jessie said.

They went down on the floor and did some basic stretches. Shadoe was aware of Spencer still hovering near the door, but she tried her best to ignore him and concentrate on Jessie. She figured he’d get bored soon enough and leave for something more exciting, like wrestling on television. Or maybe a game on Xbox.

No such luck. By the time they had finished their stretching and Jessie went to put music on, not only had Spencer pulled up a chair, two more of the guys had come in to watch.

“Hey guys,” Jessie said with a wave. “We’re going to work on some dance moves. Want to join in?”

“I’d rather have the hair on my balls plucked out with tweezers,” Paxton said with a grimace.

“Pussies,” Jessie replied, then laughed. “Let’s get going.” She turned to Shadoe. “Do you have dance experience?”

Shadoe nodded. “Years of it as a kid all the way through college. Mostly ballet though.”

Jessie grinned. “Perfect. That’ll help a lot. At least you know how to move your body.”

“True enough, but I think ballet and stripping are two entirely different things.”

Jessie laughed. “Dancing is dancing, honey. It’s just a different type of movement. As long as you have rhythm, you’ve got a head start.”

The music was slow and sexy, and Shadoe followed Jessie’s lead.

“First thing you have to do is relax your body. Breathe in and out,” Jessie said, her chest rising and falling as she deeply inhaled and exhaled. “If your body isn’t relaxed, you’ll be out there dancing around like you have rigor mortis.”

Shadoe snorted. “Good point.” She did the deep breathing as Jessie instructed.

“Ignore the audience. Concentrate on the music and how it makes you feel. Because you’re the only one who counts. It’s just you and me dancing.”

Shadoe focused on the music, relaxed, breathed, watched only Jessie. Jessie had a way with her body and the music, sliding her hips back and forth. Slight, but oh so sexy.

Ballet was all about certain moves, maintain your body structure in certain positions. What Jessie did was nothing like that—it was all free form movements. Shadoe was used to something entirely different and she tried to follow Jessie. She tried to concentrate, but knew she was failing miserably.

Jessie reached out and grabbed Shadoe’s hips. “Honey, you are one tight ball of tension. Let it go. This is fun stuff. Loosen your hips and let them slide. Back and forth, back and forth. That’s it. Now raise your arms over your head and swing your ass.”

It was difficult for Shadoe to let go. Jessie was right. She was always tense, always on the job, always thinking, planning, plotting…working.

But…this was work, wasn’t it? And her focus was on being the best. So she had to be the best at this.

“Come here,” Jessie said, bringing herself up hip to hip with Shadoe and taking Shadoe’s hands in hers. “Now, move your body in time with mine.”

They were breast to breast, hip to hip. This made it much easier to follow Jessie, undulating her hips in a side to side rhythm. Oh, yeah, now she was getting it. She settled into the music, letting her body relax and flow along with Jessie’s. Jessie pulled back, then Shadoe moved up close to her again until their breasts were touching. Then Shadoe would move back and Jessie would rock her hips against Shadoe.

This was fun. And Jessie was right. Dancing like this was hot, so much easier than the structural form of dance she was so used to.

When she turned to face the men, there were several sets of equally steamy eyes riveted on them, anticipation written all over their faces.

Jessie was right. There was power in this. And she hadn’t even taken her clothes off yet.

“I don’t think my dick’s supposed to be getting hard, but it is,” Paxton replied.

“You’d better all be staring at Shadoe or you’re dead,” Diaz said.

Now that she was out of her loose pantsuit, he realized Shadoe had a body. Not the knock-your-eyes-out-of-their-sockets body that Jessie had, but the woman definitely had curves. Nice breasts pressed against her snug fitting T-shirt, an indented waist and hips made for a man’s hands. And legs. Long legs. He wanted to see those legs under the sweat pants she wore, dammit. A woman could have tits like mountains and he wouldn’t care. He was a leg man.

And he was wrong—she could move. She learned quickly, and though he could tell she was a novice, once she was given instruction, she was a quick study. If Maria could teach her a few moves, she might make one hell of a stripper.

If she could actually handle it, and that was the key. Could she handle it? He’d have to find out before they put her up on stage.

He knew exactly how to do that.

He waited while she and Jessie practiced awhile longer. All the other guys but Diaz left, obviously unable to stand the girl-on-girl torture any longer.

When Jessie finished up, Shadoe indicated she was going to hang out and practice for awhile. Jessie winked at Diaz as she strolled by and left the gym. Diaz walked out right after her, but Spence hung back, watching. Shadoe was immersed in the music, clearly oblivious to his presence.

He stood and walked toward her. She rocked her hips back and forth in front of the mirror, her eyes open as he approached.

Maybe she wasn’t oblivious, because she locked gazes with him, yet continued to move, raising her arms over her head. He stopped behind her.

“Stripping is more than just shaking your ass, you know,” he said.

She continued to move. She had a really nice ass. His dick continued to pound. He didn’t try to hide the fact he had an erection, either. He stepped beside her, and her gaze drifted down. She had to notice.

She did. Her gaze shot back up to his face.

“Yes, watching you and Jessie dance got my dick hard. Does that bother you?”

This time she stopped, turned to him, swallowed before answering. “No.”

“Good. Because as a stripper you’re going to be getting a lot of guys hard. Get used to it.”

She grabbed a towel from the back of the chair and wiped her neck. “There are a lot of things I need to get used to. But I’m not innocent, Spence.”

“Could have fooled me.”

She stilled. “That’s really none of your business.”

He laughed. That answer told him a lot. “Oh, a woman of the world, are you?”

“"Oh baby! Riding on Instinct opened my eyes to a new way of thinking; I need a motorcycle and I need leathers right-this-very-instant! Jaci Burton’s Riding on Instinct took me on the ride of my life through the streets of New Orleans and the clubs of the French Quarter. Add in the characters of Shadoe and Spencer and my Harley Davidson, leather-loving, motorcycling-riding heart was in hog heaven.... From the first love scene to the last I could sense every emotion and feel every touch and to me that is one of the most important things I look for in a read. The third installment of Jaci Burton’s enticing and erotic new series, The Wild Riders, Riding on Instinct, is excellent and should not be missed. It releases in April, 2009 from Berkley Heat and I guarantee that readers won’t want to miss a single word or scene of this smoking hot book.”

“I loved everything about this book from the characters to the situations to the background to the sex scenes. I don’t think Ms Burton forgot a thing as she gave us a fast paced romance story with a bit of an edge. These weren’t perfect characters in a perfect situation with vanilla problems. These were flawed, real life characters in a bad situation with real life problems and solutions. Thank you for giving us a love story where there is room for compromise and the good guys not only win, they take down the bad guys with a minimum of blood shed and loss of innocent life.”

“Whew! Steaming hot as usual! Reading about the sexy Wild Riders is an utterly yummy adventure! Another smokin’ hot Wild Riders story you will love reading.”

“Every time I read a novel by Jaci Burton, I am left in awe of her ability to combine believable characters, heart-stopping suspense and scorching hot love scenes; Riding on Instinct, the third novel in the WILD RIDERS series, is no exception. Everything about Riding on Instinct is picture perfect and I stayed up half the night, unable to put it down until finishing the very last word. I am loving the WILD RIDERS series more with each new story, and I can't wait for the next release.”

“Riding on Instinct is Jaci Burton’s third book in the Wild Rider series. It’s also her best so far. To say that this book was an amazing roller coaster of a read is a blatant understatement. With complex characters who provided conflict galore, to the pulse pounding plot of catching a rogue agent, to the wonderful array of secondary characters well known to Wild Rider fans, this book has it all and in glorious abundance.... I laughed, I cried, I railed, I even had to turn on the fan while reading the oh-so-sinful sexual liaisons between this hot couple, and once the book had ended, I did the only logical thing possible. I screamed for more. Kudos and beyond for Ms. Burton’s best book yet! I cannot wait to see what comes next!”