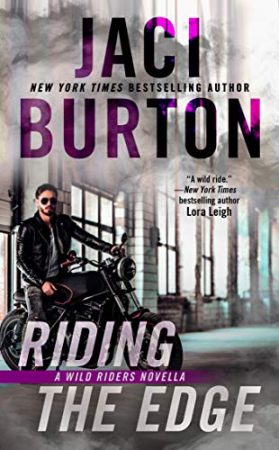 Wild Rider Rick Benetti has been tasked with keeping watch over a senator’s daughter Ava Vargas. She’s joined the Hellraisers, a biker gang suspected of drug smuggling. Not a hard assignment for Rick—Ava is beautiful and fun, and he’s looking forward to getting up close and personal with his charge.

Ava has zero interest in bikers, and only infiltrated the biker gang since her best friend dropped out of grad school and lost herself in this group. Getting close to her bestie again is the only way to rescue her. But riding with hot biker Rick turns out to be more exciting than Ava could have ever imagined.

When Rick realizes he’s fallen for Ava, he knows he’ll do whatever it takes to protect her, even if it costs him his job—or his life.

Riding the Edge: Book 4 in the Wild Riders Series

Speaking of people . . . where the hell had Lacey gone off to? Ava hadn’t seen her since they’d arrived here. Ava searched her out, but the crowd had thickened and she couldn’t find her.

“Looking for your friend?” Rick asked.

“I saw Bo take her upstairs. Let’s go find them.”

Once again, he took her hand and led her up the stairs, though they had to wind their way through a crowd of people using the stairs as a seating area. They didn’t seem to mind though, in fact, made room for Rick and Ava to find their footing until they made their way to the second floor.

Rick cocked his head to the side. “Why not?”

“I think people came up here to find some privacy.”

He grinned. “I’m sure they did. But you wanted to find your friend, didn’t you?”

Apparently not. He started down a hallway. Ava ran after him and grabbed his arm before he turned a knob. “Are you serious? Stop that.”

“You can’t just barge in on people having sex.”

He leaned against the wall and crossed his arms. “Sure. Go ahead.”

“I guess if people don’t want to be bothered they’ll lock the door. Unless they forget. Most don’t really care. Watch.”

“Anyone in here having sex?”

“Get the fuck out of here!” came a sharp retort from the darkened room.

She shook her head. “I can’t believe you just did that.”

He ignored her, took a few steps down the hall, and opened the next door. “What’s going on in here?”

There was heavy breathing. Then giggling, followed by a male voice that said, “Fucking. Why, do you wanna watch?”

He closed the door and turned to her. Ava put her hand over her mouth to smother her laugh. “You’re something.”

He waggled his brows. “You have no idea, honey.”

“You don’t mean to go into every room and do this.”

This time she quickened her step and rushed to cover the next door, putting her hand over the knob in the hopes she could spare another couple some embarrassment. “Really. Stop.”

Undaunted, he leaned into her, and her breath caught when he placed his hand over hers. She felt swallowed up, cornered, and for some reason didn’t mind at all.

“Hey, we’re in luck. Looks like we have this one to ourselves.”

Before she could say a word, he’d closed the door behind him. Ava heard the click of the lock.

“The smart ones lock the door to prevent assholes like me from coming in.”

She was now locked in a dark bedroom with Rick. And yet she wasn’t at all afraid. Intrigued, yes. Excited, definitely. 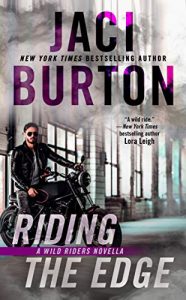 “Are you there?” he asked, his voice lowering.

“Keep talking and I’ll find you.”

She licked her lips. “What would you like me to talk about?”

He was drawing closer. She moved farther away, though it wasn’t from fear. She bumped into something with her hip. Dresser, maybe.

“I don’t know. Tell me what you’re thinking.”

“I’m thinking I’m locked in a bedroom with someone I don’t know very well.”

“Do you need to know me well?”

“What do you want to know about me, Ava?”

He was getting closer. She inched farther to the right. “Tell me where you’ve been for the past ten years.”

He went silent. When he spoke again, his breath brushed against her cheek. “I was in prison for a while for theft. Then I just rode freelance here and there, ended up in Chicago.”

She found it hard to breathe with him standing so close to her. But at least he’d been honest. “In prison?”

“How long ago was that?”

She inhaled, blew it out, then stopped breathing when he wound his arms around her waist. “Does that bother you?”

“Honestly? I don’t know.” She thought about it. Just because he did time in jail didn’t mean he was a bad person now. People made mistakes. Some people learned from them. She’d seen plenty of that.

He laughed, and took a step back. “Go away, Little Red Riding Hood.”

Affronted, she moved forward, her knee making contact with the mattress. “Now just a minute. I didn’t say that.”

“You didn’t have to say a word. You’re a scared little rabbit.”

He sounded so smug. “No, I’m not. I just don’t have indiscriminate sex with strangers.”

He laughed, the sound as dark as the room they were in. “Sorry. I left my resume in my other bike.”

And what? “Do you often bully women into having sex with you?”

“I’ve never had to beg a woman to have sex with me, Ava.”

She believed that. Women probably fought each other for the right to get in bed with him. And why not? He was gorgeous, oozed sexuality. So what the hell was wrong with her? She wasn’t a virgin. God knows the man got her juices flowing.

“If you have to think that hard about it, you should go. I promise not to chase you.”

“Wanted me to what? Chase you?”

“I don’t chase women. I like them to be willing.”

“What’s wrong with letting go and just enjoying yourself?”

She didn’t have an answer to that because she rarely did it. “I don’t know.”

“Want me to show you what it’s like?” He was challenging her, daring her to let go. Could she? Her life was all planned out, so orderly, so controlled. This moment represented everything that wasn’t her. And everything that was Rick. He didn’t appear to be a threat to her, at least not that she could discern. Then again, what did she really know about him?

What had she really known about any of the guys she’d had sex with in her lifetime?

Not much other than what they’d told her. She hadn’t known them any better than she knew Rick. And she was way more turned on by him than she’d ever been by them. Just standing in this dark bedroom with him, listening to him talk to her, had her wet, her nipples puckering and begging to be touched, licked, sucked.

She wanted something she’d never had before.