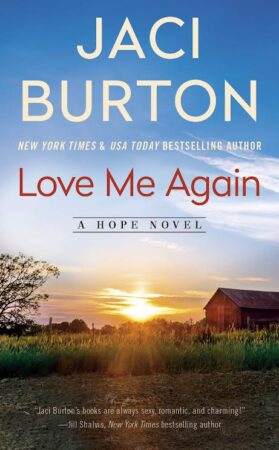 When Loretta Simmons returns to Hope, Oklahoma, after a disastrous marriage, she’s determined to remain independent for the sake of her daughter. The only thing standing in her way is Deacon Fox—the man she loved and walked away from years ago.

Since Loretta owns the bookstore right next to his current renovation project, Deacon can’t escape the woman who broke his heart. Throw in her adorable little girl and one ridiculously oversized dog, and they’re almost a family. Only he can’t be that guy—what they had was once in a lifetime.

Love Me Again: Book 7 in the Hope Contemporary Romance Series 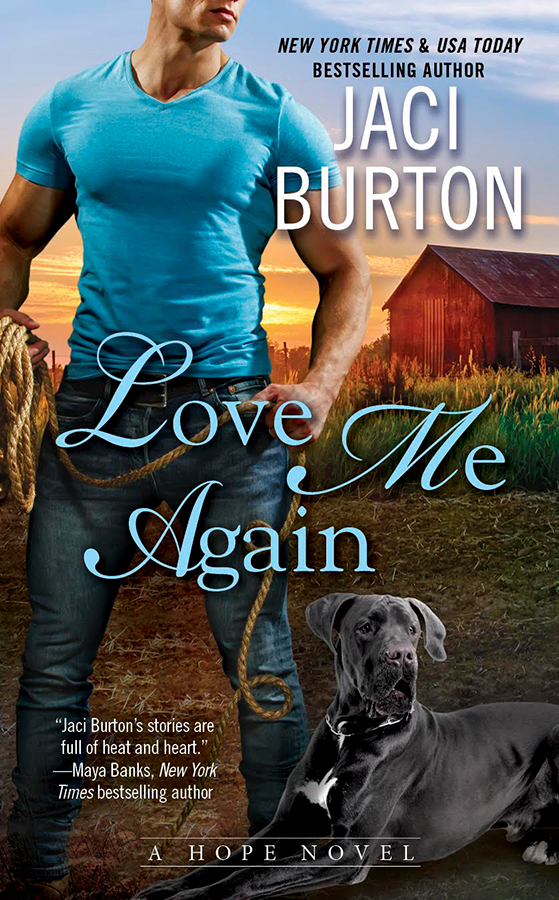 Loretta Simmons jumped at the sound of a loud crash next door.

What was that? It was only six thirty. She’d come in to The Open Mind bookstore extra early this morning to unload inventory before her store opened, expecting quiet.

This was not quiet.

Maybe it was nothing. A rodent or something, since the building had been closed for years.

Another loud banging sound made her pause.

Okay, something was up. She hoped no one was breaking in next door. Maybe she should peek out the front window.

She left the storeroom and glanced quickly at her daughter, Hazel, who was sitting on one of the sofas in the reading section. Hazel obviously hadn’t heard a thing, since she had her headphones on and was watching a movie.

Loretta made her way to the front, cautiously pulling at the blinds. There was a truck parked out front, but since it was still dark outside she couldn’t make out the lettering on it. It appeared to be a work vehicle—and what burglar would park in plain sight?

Deciding to step outside, she opened the front door and walked across the porch so she could get a better look.

At the same time, a tall, imposing figure walked out the front door of the building.

Deacon Fox. She instantly made the connection to the truck parked out front.

It was a Fox/McCormack Construction truck, which could only mean one thing. The building next door must be undergoing renovation, and Deacon Fox was in charge of that renovation.

A cloud of dust followed him. He had on worn jeans, with a tool belt strapped to his hip. He was sweaty and had dirt smudges on his face and a handful of debris slung over his shoulder. She’d never seen a man look hotter.

Though why she’d notice his hotness was beyond her. She shouldn’t notice that. About Deacon. Or any man, for that matter. Male hotness was not at the top of her radar right now.

He’d spotted her, so after he slung the pile of wood into the oversized trash bin that was parked in the street, he walked over to her.

“Deacon. I see you’re working on the Harden building.”

He shrugged. “Some investor. I guess they’re leasing out all three floors. My job is to gut it and renovate it for office space.”

Office space would be good. Potential customers for her bookstore. “I see. Kind of noisy over there this morning.”

He obviously wasn’t in the mood for conversation. But she was curious.

“So, is that noise thing going to take long?”

He nodded. “A while. It’ll get worse before it gets better.”

She heaved a sigh. “That’s not good for my customers.”

“Sorry. I have the permits to do the job, so your customers will have to get used to a little dust and noise.”

She had been afraid he was going to say that. The last thing she needed for her fledgling business was inconvenient parking and the upheaval of reconstruction going on next door. “Fine. I’ll put up apology signs.”

“How about coffee? I have some freshly made in the shop.”

“I’ve already had coffee. I gotta get back to work.”

His tone with her was short. Clipped. No warmth in his voice. They used to be so close. She remembered his smile. He had a devastating smile, and she’d seen him use it on her friends since she’d returned to Hope. But not with her. Never with her.

He walked back inside, and she felt a twinge in her middle. She knew guilt and maybe a hard stab of remorse caused that twinge. She and Deacon had made so many plans for the future together. And she’d blown up all those plans the day she’d told him she didn’t love him anymore.

That had been a lie. She had always loved him. Part of her always would. But she’d chosen a different life, and that life hadn’t included Deacon in it.

Or so she’d thought.

In the end, she’d made all the wrong choices.

She turned at the sound of her daughter, Hazel’s voice, the one amazing thing she’d done in the past twelve years. At nine years old, Hazel was the bright spot in her life. She smiled at her daughter.

Hazel peered around her at the structure next door. “What’s going on over there?”

“Someone bought the old building, so now they’re gutting it—taking out everything inside and putting all new stuff in.”

Her daughter was always curious, and anything that had to do with dirt or a mess was her jam. After Hazel had been cooped up in a super sterile condo in Dallas for so long, Loretta was inclined to let her experience all the dirt she wanted to.

“It’s dusty and noisy, so don’t get too close. It could be dangerous.”

“I know. But I wanna hang out here and watch. Is that okay?”

“Yes, but don’t go inside that building, and stay on this part of the porch.”

Loretta remained with Hazel for a few minutes, watching as her daughter found a spot on the top step and sat. Other than the netbook she used for watching movies and playing video games, Hazel had no toys with her. Today she wore capri jeans, a short-sleeved T-shirt, and her favorite baseball cap. Her entire wardrobe had changed since they’d moved from Dallas. Tom had always expected his daughter to dress appropriately. And by appropriately he had meant pinks and purples and dresses and sweaters.

Hazel had hated that she’d never been given the freedom to choose her own clothes.

After the divorce, Loretta had told Hazel she could wear whatever she wanted to. She’d rebelled against her father’s rules and chosen jeans, T-shirts, and baseball caps, her long blond hair pulled up into a ponytail and wound through the hole in the back of the cap. And she always wore her favorite pair of black Chucks tennis shoes. With no socks.

Whatever. As long as her daughter was happy, then Loretta was happy. Loretta’s parents disapproved, of course, which also made Loretta smile. So maybe Loretta was experiencing her own bit of rebellion, even if it was a bit passive-aggressive.

She might have eked out a bit of independence with the divorce, but she hadn’t yet gotten to the part where she would tell her parents to go to hell. They might have pushed her into making life changes as a teenager, but she’d been the one who’d ultimately made the choices, and she had no one to blame but herself.

After taking one last look at Hazel, who seemed content to watch the goings-on at the building next door, she sighed and headed back inside the bookstore to start her day. And to start making those apology posters for her customers.

Maybe she should consider making one of those apology posters for Deacon. Though she doubted that would be enough to make up for what she’d done to him.

She could never make enough apologies to Deacon for what she’d done.

Deacon Fox worked with his crew ripping out the cabinets that lined the wall of the first floor of the building they were going to renovate. It wasn’t even eight in the morning yet and he was already drenched in sweat. This old building had seen better days, the place was piled high with years’ worth of junk, and this project was going to be a nightmare.

He looked around and grinned as dust motes filled the air, a rain of gray obliterating the summer sun trying to come in through the open front door.

Yeah, it was a mess. Just the way he liked it.

He hauled a piece of demolished cabinet out to the Dumpster. On his way back, he spotted a little girl sitting on the front step of Loretta’s bookstore. She looked up at him but didn’t say anything, so he didn’t say anything back. He noticed on his next several trips out to haul discarded debris that she was still there . . . watching.

He knew that was Loretta’s daughter. She was cute, with her ponytail sticking out of her baseball cap. And she seemed to be interested in what he was doing. He wanted to go talk to her, but he wasn’t about to. It was best he keep his distance from Loretta and her kid.

When he dropped another load in the Dumpster, the little girl smiled at him.

What could he do? Whatever he felt about Loretta, he wasn’t going to take it out on her kid. So he smiled back, then went back inside and picked up more crap to drag outside.

He and his partner, Reid McCormack, had discussed whether or not to bid on this job. Deacon had known it was next door to Loretta’s bookstore. Reid had told him he’d understand if Deacon wanted to pass on this one.

But it was going to be a decent-sized job. The building had three floors and was similar to the renovation Reid had done on the building Loretta now occupied. It wasn’t an historical building like that one, but it was a large project, and Deacon wasn’t going to let his past with Loretta make them pass up an opportunity for a moneymaking job.

Reid said he’d take it, but by the time they’d bid on and gotten the job, Reid was working on designing a new building for one of the town’s large medical practices. That project would tie him up for a while, which meant Deacon was going to have to take the reins on this one.

He was fine with it. What he and Loretta had was in the past, and he sure as hell could handle working next door to her for the next few months.

They lived in the same town now, and they shared many of the same friends. It stood to reason they were going to occupy the same orbit every now and then. He might as well get used to seeing her.

Except seeing her dragged in all the old memories, opening that door to the past.

The past had been golden. They’d been young and in love, and they’d made plans together. And unlike some things in his past, his life with Loretta wasn’t clouded. It was vivid. Every moment they shared together was like it had been yesterday.

The way her hair used to curl at the ends. The way her lips used to tilt when she smiled.

The sound of her breathing when they . . .

He forced the past away and stared out at the sunlight, at those dust motes slowly falling to the ground, every one of them holding memories. He shoved them aside.

His only option was to keep that door firmly closed, because he’d hurt enough over her already.

As for the job and the close proximity? He’d just suck it up and deal with it.

He could handle it.