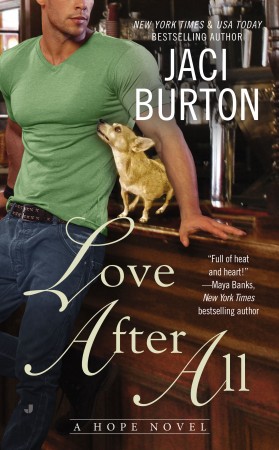 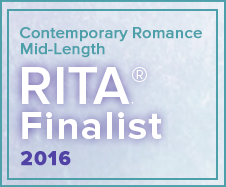 High school math teacher Chelsea Gardner has the perfect plan. She’s tired of dating all the wrong men, and after years of frustration, she’s developed a foolproof list of requirements for finding “The One.”

Bar owner Sebastian “Bash” Palmer finds Chelsea beautiful, smart and fun, but he thinks her list is ridiculous and unnecessary. Intent on proving Chelsea is looking for love in all the wrong ways, he offers to help her find the “perfect” man.

Chelsea knows Bash isn’t the right guy for her—he barely meets one of her criteria—but there’s something about the charismatic man that has her yearning for things that are most definitely not list approved.

Because sometimes, a relationship that looks totally wrong on paper can turn out incredibly right…

Love After All: Book 4 in the Hope Contemporary Romance Series

Chelsea Gardner sat at the No Hope At All bar, waiting for her friends.

While she waited, she got out her notebook and doodled.

Okay, maybe she wasn’t doodling. She was on a mission.

The ten-point list made perfect sense to her. She’d fine-tuned it, but really, she’d had this list in her head for a while now, and decided it was time to memorialize it, get it down on paper. Maybe even laminate it.

Chelsea was thirty-two years old, and the one thing she knew and knew well was men. She had years of dating history, and she could weed out a decent man from a loser in the first fifteen minutes of a date.

She should write a book about it. She’d probably make millions.

Okay, in reality, maybe not. But she had a lot of experience in dating. She could offer up some valuable advice. At least advice on how to date the wrong man. Had she ever dated a lot of the wrong men. She was an expert on that.

Her list would ensure she found the right man—finally. She was tired of going out on useless dates. From now on, she was going to ask the correct questions so she wouldn’t waste any more time on the wrong man. If a prospective date didn’t meet the criteria on her list, then he wasn’t the perfect man for her.

Her list wasn’t going to focus on personality traits—she already knew in her head the type of guy she wanted—warm, caring, compassionate, with a sense of humor. If he didn’t possess those basics, he’d be out of the running before they even got started. And those she could suss out right away without a list. Nor did she have a preference for looks. No, this list was compatibility-based. That’s where she’d run into roadblocks in the past and where she was going to focus her efforts on in the future.

She scanned her list, nodding as she ticked off the attributes in her head.

She studied the list, tapping the pencil on the bar top.

“You look deep in thought.”

Her head shot up as Sebastian “Bash” Palmer, the owner of the bar, stood in front of her.

Talk about the wrong guy. Bash was the epitome of wrong, on so many levels.

He cocked a dark brow. “Yeah? I noticed you were intently focused on writing. So . . . grocery list?”

He leaned over, trying to sneak a peak. “The perfect—”

She shut the notebook. “None of your business.”

“You think I’d try to capture a man by cooking. Well, you’re wrong.”

He laid his palms on the edge of the bar. “So, it does have something to do with a guy, doesn’t it?”

She refused to take the bait. “I didn’t say that.”

A couple guys came into the bar and took a seat.

“We’re not done talking about this,” he said, his stormy gray eyes making contact with hers before walking away.

Oh, they were so done talking about it.

Typical Bash, always up in her business.

And he was definitely the wrong type of man for her.

While Bash attended to his customers, she opened the notebook and checked her list.

Yes, Bash was the perfect example of the wrong type of guy. She mentally ticked off all the items on her list that he didn’t fit.

She wasn’t sure he even owned a suit. As owner of the No Hope At All bar, he worked terrible hours. As a teacher, she worked during the day, and he worked afternoons and evenings. They’d never see each other.

She had no idea who he was dating, but he was always going out with some woman or another, so he likely had some crazy ex-girlfriend somewhere in his past. She knew he was a beer and hard liquor guy, and his idea of fine dining was a burger and onion rings from Bert’s. He wouldn’t know fine dining if he fell into it. She had no idea how he felt about kids, but the guy practically lived at the bar, and he hadn’t had a serious relationship since his divorce, so it wasn’t like he was in any hurry to have children. Plus, he didn’t have any animals.

Then again, she didn’t have pets, either. But that wasn’t her fault. Her apartment didn’t allow them. She just wanted to make sure whatever guy she ended up with loved them. She wanted a dog. Or a cat. She’d never had either. Her best friend Emma had two dogs, Daisy and Annie, and her other best friend Jane had a dog. Logan and Des had several dogs on their ranch.

She’d always wanted pets, and she hadn’t had one since her childhood dog, Scotty. She’d missed having a dog to cuddle with.

She shook her head. Back to her list. She scrolled down the list and stopped at the next item.

Oh, right. Not hanging out at the bar with the guys all night. That answer was self explanatory, since that was pretty much all Bash did. All the time.

She knew he loved sports because there were several TVs set up at the bar, and Bash was always cheering for some team or another. The man was sports-crazy.

And she had no idea what his idea of a perfect vacation would be, but she highly doubted it involved room service. Bash had an ATV and she knew he was an outdoorsy kind of guy.

Whereas Chelsea was allergic to everything outdoorsy. Anything involving the outdoors typically meant you couldn’t wear high heels, and Chelsea lived for her heels.

See? They were not compatible in the least. Bash had failed everything on her list.

She closed her notebook and tucked it back into her purse.

Why was she even comparing Bash to her list, anyway? It wasn’t like he was remotely in the running. Even if there had been that night she and the girls had come here during the holidays. And maybe she had been a little on the inebriated side, and maybe Bash had whispered something in her ear that even several months later still made her blush hot, and still kept her up at night thinking about—

“You were going to give me ideas for the perfect drink. That’s what you were writing in your secret notebook, right? I know you like to challenge me.”

She sighed. “Believe it or not, Bash, not everything is about you.”

He feigned a shocked look. “It’s not?”

She rolled her eyes.

“What are we talking about?”

Her best friends, Emma and Jane, grabbed seats on either side of her.

“Chelsea’s hitting on me,” Bash said.

“She is?” Emma grinned at her.

“I am not hitting on Bash. He’s being ridiculous.”

“She’s writing love notes to me in her notebook and won’t let me see them.”

She shot him a glare. “Are you twelve? Stop it.”

Jane looked over at her. “You’re writing love notes? To Bash? This is the most interesting thing that’s happened all day. Please continue.”

She was going to throw her drink at Bash. “No. I am not writing love notes to Bash.”

“Then who are you writing them to?” Emma asked.

Chelsea wanted to scream. “No one. No love notes.”

“She doesn’t want you to see them, because they’re for me,” Bash said.

Emma looked at Bash, then at Chelsea, a questioning look in her eyes.

“He’s full of it,” Chelsea said. “And he’s just giving me a hard time, because that’s what he does.”

Bash slanted her that look again, the one he’d given her that night a few months back. Smoldering. Filled with promise. The kind of look that made her squirm on her barstool.

“I have never given you a hard time, Chelsea.” And as if he hadn’t just infuriated her, he calmly asked, “What would you ladies like to drink?”

Jane and Emma both ordered sodas, so Bash poured their sodas, then went off to tend to his other customers.

“He drives me crazy,” Chelsea said.

Jane cocked her head to the side, studying Bash’s retreating form. “Oh, I don’t know, Chelse. He’s funny. And so hot.”

“He is not.” Chelsea refused to acknowledge the way Bash’s black T-shirt fit so snugly across his incredible chest, or the bulge of his biceps beneath the hem of the shirt. Or his flat abs, or his incredible ass.

Not that she’d noticed. At. All.

“This is true,” Emma said. “Why haven’t you ever dated him?”

“Bash?” Chelsea slid a look down the bar at him, then at Emma. “Totally not my type.”

“Phenomenal butt, those tattoos, a goatee. We have discussed your standards being impossibly high, haven’t we, Chelsea?”

Chelsea shifted her attention to Jane. “Like I said. He’s not my type. I’ll just leave it at that.”

“And what exactly is your type, Chelsea?” Jane asked. “Are you holding out for royalty or something?”

She lifted her chin. “No. I’ve actually made a list.”

Jane laid her hand on Chelsea’s arm. “Honey. You do realize the perfect man doesn’t exist.”

Chelsea took another look in Bash’s direction, then turned her back to him. “Yes, he does. The perfect man does exist. And trust me, it isn’t Bash.”