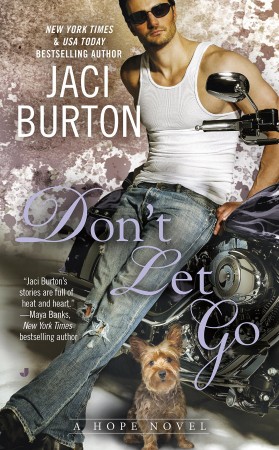 Brady Conners is hardly the settling type, but when tragedy strikes in his family, he has no choice but to return home to Hope, Oklahoma. Setting up shop to work on custom motorcycles and pass the time, Brady has no intention of letting anyone get close—until he meets Megan.

Pastry shop owner Megan Lee is drawn to quiet, brooding Brady. Their connection is undeniable, and it quickly develops from physical attraction into something much stronger. But with Brady putting up barriers, Megan is afraid to truly open her heart—unless she can convince him to let go of the past…

Brady Conners was doing one of the things he enjoyed the most—smoothing out dents in a quarter panel of a Chevy. As soon as he finished, he’d paint, and this baby would be good as new.

It wasn’t his dream job. He was working toward that. But with every day he spent as a mechanic at Richards Auto Service, thanks to the shop’s owner, Carter Richards, he was pocketing money. And that got him closer to his dream—opening up his own custom motorcycle paint shop.

A long time ago—a time that seemed like an eternity now—he’d had plans with his brother Kurt to start up a business together. Brady would do bodywork and custom motorcycle paint, and Kurt would repair the bikes.

That dream went up in smoke the day Brady got the call that his brother was dead.

He paused, stood, and stretched out the kinks in his back, wiping the sweat that dripped into his eyes. He took a step away and grabbed the water bottle he always kept stored nearby. He took a long drink from the straw, swallowing several times until his thirst was quenched.

Needing a break, he pulled off his breathing mask and swiped his fingers through his hair, then stepped outside.

It was late spring, and rain was threatening. He dragged in a deep breath, enjoying the smell of fresh air.

He really wanted a cigarette, but he’d quit a little over a year ago. Not that the urge had gone away. Probably never would. But he was stronger than his own needs. Or at least that’s what he told himself every time a powerful craving hit.

Instead, he pulled out one of the flavored toothpicks he always kept in his jeans pocket and slid that between his teeth.

Not nearly as satisfying, but it would do. It would have to.

He leaned against the wall outside the shop and watched the town in motion. It was lunchtime, so it was busy.

Luke McCormack, one of Hope’s cops, drove by in his patrol car and waved. Brady waved back. Luke was a friend of Carter’s, and while Brady wasn’t as social as a lot of the guys he’d met, he knew enough to be friendly. Especially to cops.

Samantha Reasor left her shop, loading up her flower van with a bunch of colorful bouquets. She spotted him, giving him a bright smile and a wave before she headed off.

Everyone in this town was friendly. He mostly kept to himself, did his work, and then went home to the small apartment above the shop at night to watch TV or play video games. Some nights he did side work painting bikes. He had one goal in mind, and that was to save enough money to open his business. He saw his parents now and again, since they lived in Hope, but the strain of Kurt’s death had taken a toll on them.

Nothing was the same anymore. With them. With him, either, he supposed.

Sometimes life just sucked. And you dealt with that.

His stomach grumbled. He needed something to eat. He pushed off the wall and headed up the street, intending to hit the sandwich joint on the corner. He’d grab something and bring it back to the shop.

He stopped suddenly when Megan Lee, the hot brunette who owned the bakery, dashed out with a couple of pink boxes in her hand. She collided with him, and the boxes went flying. She caught one, he caught one, and then he steadied her by sliding his arm around her.

She looked up at him, her brown eyes wide with surprise.

“Oh my gosh. Thank you, Brady. I almost dropped these.”

“Yes. But let me check these.” She opened the boxes. There were cakes inside. They looked pretty, with pink icing on one and blue on the other and little baby figurines in strollers sitting on top of the cakes. There were flowers and other doo-dahs as well. He didn’t know all that much about cake decorations. He just liked the way they tasted.

“They’re for Sabelle Frasier. She just had twins.” She looked up at him with a grin. “A boy and a girl. Her mom ordered these for her hospital homecoming. I spent all morning baking and decorating them.”

He didn’t need to know that, but the one thing he did know was that people in this town were social and liked to talk. “They look good.”

She swiped her hair out of her eyes. “Of course they’re good.”

He took the boxes from her. “Where’s your car?”

“Parked just down the street.”

“How about you let me carry these? Just in case you want to run into anyone else on your way.”

Her lips curved. “I think you ran into me.”

He disagreed, but whatever. He figured he’d do his good deed for the day, then get his sandwich.

He followed her down the street.

“I haven’t seen much of you lately,” she said.

He shrugged. “Been busy.”

“I’ve been meaning to come by the shop and visit, but things have been crazy hectic at the bakery, too.” She studied him. “How about I bring pastries by in the morning? And I’ve never brought you coffee before. How about some coffee? How do you take it? Black, or with cream and sugar? Or maybe you like lattes or espresso? What do you drink in the mornings?”

He had no idea what she was talking about. “Uh, just regular coffee. Black.”

“Okay. I make a really great cup of coffee. I’m surprised you haven’t come into the bakery, since it’s so close to the auto shop. Most everyone who works around here pops in.” She pressed the unlock button on her key fob, then opened the back door and took the boxes from him.

Man, she really could talk. He’d noticed that the couple of times they’d been together in social situations. Not that it was a bad thing, but for someone like him who lived mostly isolated, all that conversation was like a bombardment.

But he liked it. The one thing he missed the most since his self-imposed isolation was conversation. And Megan had it in droves. He just wasn’t all that good at reciprocating.

After she slid the boxes in, she turned to him. “What’s your favorite pastry? You know, I’ve dropped cupcakes off at the auto shop. Have you eaten any of those?”

He was at a loss for words. He always was around her. A few of his friends had fixed the two of them up before. Once at Logan and Des’s dinner party, then again at Carter and Molly’s wedding. They’d danced. Had some conversation. Mostly one-sided, since Megan had done all the talking.

Okay, that wasn’t exactly the truth. What heterosexual male wouldn’t be interested in Megan? She was gorgeous, with her silky, light brown hair and her warm chocolate eyes that always seemed to study him. She also had a fantastic body with perfect curves.

But he was here to work. That was it. He didn’t have time for a relationship.

He didn’t want a relationship, no matter how attractive the woman was. And Megan was really damned attractive.

“Brady?” she asked, pulling his attention back on her. “Cupcakes?”

She cocked her head to the side. “Oh, come on, Brady. Everyone has a favorite pastry. Cream puffs? Donuts? Scones? Cakes? Bars? Strudel?”

He zeroed in on the last thing she said. “Apple strudel. I used to have that from the old bakery when I was a kid.”

She offered up a satisfied smile. “I make a killer apple strudel. I’ll bring you one—along with coffee—in the morning.”

He frowned. “You don’t have to do that.”

She laid her hand on his arm and offered up the kind of smile that made him focus on her mouth. She had a really pretty mouth, and right now it was glossed a kissable shade of peach.

He didn’t want to notice her mouth, but he did.

“I don’t mind. I love to bake. But now I have to go. Thanks again for saving the cakes. I’ll see you tomorrow, Brady.”

She climbed into her car and pulled away, leaving him standing there, confused as hell.

He didn’t want her to bring him coffee. Or apple strudel. Or anything.

He didn’t want to notice Megan or talk to Megan or think about Megan, but the problem was, he’d been doing a lot of that lately. For the past six months or so he’d thought about the dance he’d shared with her. The laughs they’d enjoyed together and her animated personality. She had a sexy smile—not the kind a woman had to force, but the kind that came naturally. She also had a great laugh and she could carry a conversation with ease. And that irritated him because he hadn’t thought about a woman in a long time.

Ever since his brother had died, he hadn’t wanted to think about anything or anyone. All he’d wanted to do was work, then head upstairs to his one-room apartment above the auto shop, eat his meals and watch TV. And on the weekends he’d do custom bike painting. Keep his mind and his body busy so he wouldn’t have to think—or feel.

Women—and relationships—would make him feel, and that wasn’t acceptable. He’d noticed that right away about Megan, noticed that he liked her and maybe—

No. Wasn’t going to happen—ever. He needed to get her out of his head.

He only had time for work, and making money. He had a dream he was saving for.

And now he barely had time for lunch, because he had a Chevy to get back to.