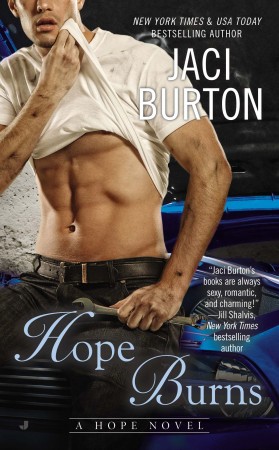 A novel of small-town hearts and big dreams…

Molly Burnett dreads returning to her hometown of Hope for her sister’s wedding, especially knowing she’ll have to endure a weekend with the one man she never wants to see again. It’s only a couple of days, so Molly will try to forget her painful past with high school sweetheart Carter Richards. Because despite the bitter memories, she still can’t forget what they once meant to each other.

But when Molly is forced to extend her stay, Carter sees this as his second chance to do things right, to start over again with the only woman he’s ever loved. This time, he isn’t going to let Molly run. Together they’re going to confront the past and put it behind them, and hope for a future as bright as the flame that still burns hot between them.

This wedding was going to be a disaster.

Molly Burnett didn’t know what had possessed her to agree to come back to Hope for her sister Emma’s wedding. Love for her sister, of course. But she knew what was at stake. She never came home, hadn’t been home since she’d left when she was eighteen.

That had been twelve years ago. And she’d moved around from town to town, state to state, never setting down roots. Permanence just wasn’t Molly’s thing. And she sure as hell had never once come back to her hometown.

Until now. Even as she drove past the city limits sign her throat had started to close up, her breathing becoming labored. If she hyperventilated, crashed the car, and died a week before Emma’s wedding, her sister would never forgive her.

Then again, with all the sputtering and coughing her ancient Ford Taurus was doing, it might just do itself in before she had a chance to crash it into anything.

“Come on, George,” she said, smooth talking the car. “Hang in there.” She didn’t have a new—or a newer used—car in her budget. Old George, currently age fifteen and she hoped heading toward sixteen, was just going to have to suck it up and keep working.

At the next stop light, George shuddered and belched rather loudly, making the two little kids sitting in the backseat of the car next to her point and laugh. She gave them a smile, then gently pressed the gas. Obviously having cleared his throat, George lumbered on and Molly sighed in grateful relief. Gripping the steering wheel and forcing deep, calming breaths, Molly drove past the First Baptist Church, her favorite donut shop, the florist, and Edith’s Hair Salon. So many places still stood, all of them so familiar.

And yet a lot had changed in twelve years. So much progress, so many new businesses had cropped up. New restaurants, the hospital was bigger than she remembered, and they’d widened the highway. When she’d lived here, there’d been only one shop to stop at for gas and sodas along the main road. Now there was one at every corner.

She purposely turned off the main road, determined to avoid the high school. Too many memories she wasn’t ready to face yet. She headed toward the main strip of town. There was a new bakery, and on impulse, Molly decided to stop and buy some goodies for the family.

She headed inside, the smell of sugar and baked goods making her smile. This place definitely reminded her of home, though it hadn’t been Cups and Cakes last time she was home. Red and Helen Osajeck had owned the Hope Bakery for as long as she remembered. Her mom had told her they’d retired several years ago and sold the bakery.

She wondered who own this place?

She browsed the display case, her stomach rumbling.

She stood, and smiled at the familiar face from back in high school. Light brown hair and brown eyes, she was still as pretty now as she had been in school.

Megan frowned as if trying to place Molly’s face, then grinned. “Molly Burnett? I can’t believe it’s you. Are you back in town for Emma’s wedding?”

“Then welcome home. I’m so glad to see you after all these years.”

“Thanks.” She looked around. “And you work here?”

“Actually, I own the shop. I bought it two years ago after the Osajeck’s retired. I worked for them all through high school, and during breaks from college. I wanted to own my own bakery,and the opportunity fell into my lap when they decided to sell. And of course, you don’t want to hear all those details.

Molly grinned. “No, really, that’s fantastic. Congratulations. Also, it smells wonderful in here. I’m going to have a hard time figuring out what to buy.”

“Thank you. Have you gotten settled in yet?”

“No. I’m just driving into town, and thought I’d stop and buy some goodies on my way.”

“You’ve come to the right place, then. May I make some suggestions?”

Megan took out a box, and between the two of them, they filled it with éclairs and cream puffs.

She left the store, having survived her first reunion with an old friend from Hope. She made her way outside, stopping short as she spotted a very fine male ass bent over, inspecting her car.

He straightened, and Molly almost dropped the box of baked goods.

The last person in Hope she wanted to see today—or ever–stared back at her.

Carter Richards, her first and only love, and the main reason she’d left Hope all those years ago.

“What are you doing here, Carter?”

“My auto shop is just a few doors down. I was outside and I saw you get out of the car.”

Recovering, she walked over to the driver’s side, placed the box on the hood, then opened the door. “And you thought this would be a good place for a reunion? Really, Carter?”

She hoped he wouldn’t notice her hands shaking as she slid the box onto the passenger seat and climbed in, shutting the door.

He leaned his forearms inside the car. “That’s all you have to say?”

“I think we said all we needed to say to each other twelve years ago.”

She turned the key and winced at George’s attempts to fire on all cylinders. She tried again, and this time, the car fired up. Sort of. It mostly wheezed..

Dammit. Come on, George. I just need you to start this one time.

“Let me help you with that.”

She tried again. No go.

Carter’s voice was soft, laced with tenderness and concern. She wanted him to disappear. She wanted to pretend he didn’t exist, just like she’d tried to erase him from her memories. She wanted to be anywhere but here right now.

“Slide out and let me give it a try.”

With a resigned sigh, she opened the door and got out. Carter slid in and fiddled with the ignition.

“George is a little touchy.”

He turned to face her. “George?”

His lips curved, and her stomach tumbled. God, he was even more good-looking now than he’d been in high school. Dark hair, and those mesmerizing green eyes. He wore a polo shirt that stretched tight over his well-muscled biceps. Why couldn’t he have turned out bald and fat and hideously ugly? Not that it would have made a difference anyway, because he still would have been Carter.

Carter got out and held the door for her. “There you go.”

She looked up at him. “Please don’t.”

He nodded and backed up a step so she could back out of the parking spot, which she did with a little too much fervor. As she drove away, she stared at him way too long in her rearview mirror.

Forcing her attention on the road ahead, she gripped the steering wheel and willed the pain in her heart to go away.

Carter watched Molly drive away, that old junker she drove belching out smoke and exhaust like it was on its last legs.

He shook his head and leaned against the wall of the bake shop, needing a minute to clear his head before he went back to work.

He’d been thinking about Molly for a while now, knowing she was coming back to Hope. She had to, because she was in Luke and Emma’s wedding. He hadn’t expected to see her today, though, when he’d stepped outside to take a break from all the damn paperwork that was his least favorite part of being owner of several body repair shops.

He’d always liked watching the cars go by on his breaks.

When he’d seen an unfamiliar one—an old, beat-up Taurus choking out a black trail of exhaust, then wheezing as it came to a stop in front of the bakery—he couldn’t help but wonder who’d drive a piece of shit like that. Surely the owner had to realize the poor junker should be shot and put out of its misery.

His heart slammed against his ribs as a gorgeous brunette stepped out of the car. She had on jeans, a white T-shirt, and sandals as she hurried into the bakery like she didn’t want to be recognized. She even kept her sunglasses on, but there was no mistaking who it was. Not to him, anyway.

He could never forget the curve of her face, the fullness of her lips, or her long legs. It might have been twelve years, and she might have changed from girl to woman, but Molly Burnett was someone Carter would never forget. His pulse had been racing, and he knew damn well he should turn around and go back to his office. But for some reason his body hadn’t been paying the slightest attention to what his mind told it, and he pushed off the wall and started down the street toward the bakery.

He debated going inside, then thought better of it and decided to figure out what the hell it was she was driving. So he’d walked over and studied the car.

A ’99 Taurus. Christ. He wondered where Molly was living, and how the hell that car had made the trip. It had dents all over, patchy rust spots, the muffler was nearly shot, and the tires badly needed replacement—like a year ago.

In retrospect, he should have let Molly be, should have kept his distance from her. But when he’d seen her, he’d closed his eyes for a fraction of a second, transported back to the last time he’d heard her voice. It had been in hurt and anger. The last words they’d said to each other hadn’t been kind ones.

And maybe he wanted to change all that.

But it hadn’t gone at all like he’d expected. She was still hurt, still angry with him, even after all these years.

Carter dragged his fingers through his hair and made his way down the street toward the garage, then back to his office. He shut the door and stared at his laptop, but all he could see was Molly’s long dark hair pulled up in a high ponytail, and her full lips painted some shimmering pink color. She was tan, and her body had changed over the years. She was curvier now, had more of a woman’s figure.

But she was still the drop-dead gorgeous woman he’d fallen in love with all those years ago.

He’d thought he was over her, that what he’d once felt for her in high school was long over. But they’d had a deeper connection than just being first loves.

And seeing her again had hurt a lot more than he’d thought it would.