Over the weekend, Biker Dude and I hit Bed, Bath and Beyond and bought a few things to organize kitchen drawers and closets. Because woe was our organization.

I don’t know about y’all, but periodically we’ll organize drawers and closets (by periodically I mean every few years), and then over the years we’ll toss things in said drawers and closets, making them a giant, cluttered mess. So eventually I cry uncle because I can’t find anything in them. I mean I’ll pull things out of the utensil drawer and have no earthly idea wtf that item is or what it’s used for. That’s when I know it’s organization time.

The purging of the wtf was a true experience. Plastic and metal thingies that I had no idea were in the drawers. No idea what they were used for. Or items I hadn’t used in years. Fortunately I’m not a hoarder and don’t place much sentimental value onto things, unless it’s something that once belonged to my mom. If I haven’t used it in a year or two, I obviously don’t need it. To the trash or giveaway pile it went. I’m a big believer in recycling, and I’m too lazy to hold a garage sale, so we give a lot away to Goodwill every year.

I really should have taken a before picture, but here are the after photos: 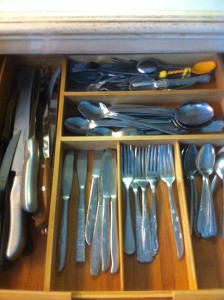 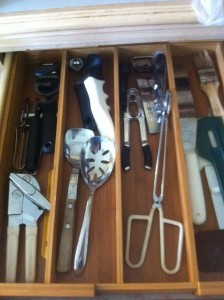 Oh all the space, the neatness of it all! (It won’t last)

Also…it’s sad and pathetic this type of organization gave me so much pleasure. And if you think this is bad, you should have seen my bathroom closet. No-longer-used-prescription drugs and OTC stuff dating back to 2006. I wish I was kidding. Plus various expired shampoos and tanning lotions. The trash can was full. But now my bathroom closet rocks. And I found things in there I didn’t even know were missing. Go figure.

That was my exciting weekend.

Also, today I’m an Author In The Spotlight at RT BookReviews, where I talk about Changing The Game. There’s also an exclusive excerpt, in case you haven’t read the book yet.

*Note: Bed Bath and Beyond doesn’t know me. I’m not doing a product endorsement for them or for the utensil trays. For all I know these trays are sold at 25 other stores, or there are 10 other brands of expandable drawer trays just as awesome. I just happened to find these at BB&B and thought they rocked.