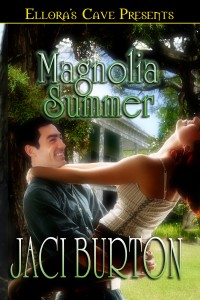 Returning to hot, steamy, Magnolia, South Carolina, is the last thing Jordan Weston wants to do. The death of her grandmother and inheritance of the family plantation mean she can sell the land and make enough money to realize her dream—to open her own theater in New York.

But more than the weather sizzles in Magnolia. Jordan’s forced to hire Sam Tanner to repair the old house. Jordan lusted after Sam in high school when he was the bad boy and she was the nerdy drama geek. He’d even kissed her once, firing up her adolescent fantasies, then laughed when she ran away. Though she tries to resist his considerable charm, Sam’s not giving her any quarter. He’s making it abundantly clear that this time she isn’t going to run.

Under a scorching South Carolina sun, her resolve to remain impervious to Sam melts and she gives in to her desire. After all, why not engage in steamy sex with the bad boy of her dreams to while away her time in sultry Magnolia? When the project is finished, she’ll go back to New York and forget all about Sam.

If only her heart would let go of foolish dreams.

You can read an excerpt here