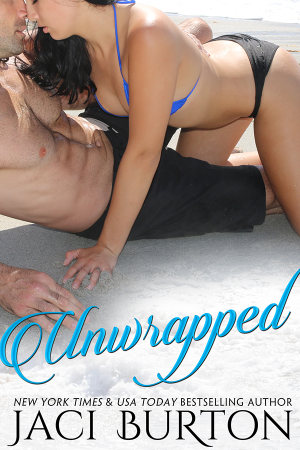 Justin Garrett has gotten a glimpse into the real Amy Parker when he accidentally views her private online journal. And what he sees is definitely intriguing. Because Amy has some very sexual fantasies.

Amy has worked hard to keep her private life separate from the buttoned down world that exists in her law firm where she’s wrestled her way into a partnership. And there’s no way she’d let someone younger than her like brash Justin Garrett get a step up on her. Justin might be smart and savvy, and also sexy and the star of some of her wildest fantasies, but work is where he belongs and where he’ll stay.

But they’re stuck together doing a corporate acquisition in Hawaii over the Christmas holidays, and Justin is determined to give Amy a holiday she’ll never forget. But first Justin has to prove to her that he sees her as a vibrant, sensual woman, and not a rung to climb up the corporate ladder. He intends to do that by making her most secret fantasy come true—a night with two men who fulfill her every desire. And then he’ll show her he’s a man of substance—and heart. The sand was hot. She hurried to the water's edge, relieved when the waves lapped at her feet and ankles. It was cold. She needed the cool water to knock some sense into her. As soon as she was in waist high, she dove in, letting the waves crash over her.

It was heaven. She swam out a few yards, loving the feel of the waves undulating under her. It was incredibly freeing, and oh so relaxing. She finally stopped, treading water and feeling for footing, landing on a sandbar. She stood in the water up to her breasts. Mitch swam up next to her and grinned as he stood up, shaking his head.

“Now that was refreshing,” he said with a wide grin.

She screamed when arms encircled her waist and swept her off her feet. Flailing about, she turned, realizing she was being held in Justin's arms.

“You scared the hell out of me,” she said, splashing water in his face.

He shook his head and laughed. “Thought I was a shark, didn't you?”

“Maybe.” All too aware of how good it felt to be nestled against his chest, she said, “You can put me down now.”

One raven brow arched. “Oh, I don't think so.” Instead, he bent a bit, then lifted her, clear out of the water, and she went sailing in the air, screaming at the top of her lungs. Instead of landing somewhere in the water, she was caught by another set of strong arms. This time, it was Mitch.

She glared at both of them. “You guys are not funny.”

“We think we are,” Mitch said, cradling her close, turning her toward him so her breasts were mashed against his chest. “You're safe with us, Amy. Don't worry.”

She wasn't worried at all. Justin swam up and linked hands with Mitch underneath her, dropping her into the middle between them. She lay in their arms in the water, cradled against their chests while the two of them carried on a conversation about sports, seemingly ignoring her. It was a man hammock. She was comfortable, safe, and absolutely petrified. She was a sandwich in the middle of two amazingly desirable men.

Finally, she relaxed, letting her head rest against Justin's chest as they rocked her back and forth, the sound of their voices a constant comfort. She closed her eyes and let the sun bake her, the waves lapping over her skin.

She imagined the two of them taking her right there in the water, stripping off her top and each of them sucking a nipple into their greedy mouths, licking and biting until she writhed on top of the waves and begged them to fuck her. Her pussy clenched and she whimpered with need. Too long. She'd waited too long for an orgasm. Too long for a man. She craved strong, callused hands between her legs, searching her swollen slit and pumping fingers into her core, caressing her clit until she cried out in climax and demanded a hot cock to replace those fingers.

Maybe Santa would bring her that for Christmas. A nice fantasy come true in her stocking.

She smiled. Then felt the press of lips against hers.

Her eyes drifted open and Justin's face loomed in front of hers.

A million words hovered on her lips, all of them denial, every single one of them obliterated when his mouth came down on hers again, this time harder, hungrier. She gasped against him and his tongue slipped between her teeth, finding hers. It was an electric shock, a velvet fire as he licked her, his lips doing dangerous things to her senses. He dragged her upright. She bobbed in the water, her legs adrift, her arms clasping around his neck as he drove into her mouth with more intent.

She'd always known there was a primal side to Justin, this barely unleashed animal he kept tucked away in business suits. Now he was letting it out, letting her see it, and she couldn't get close enough to this side of him. She wanted more.

But another set of arms came around her, dragging her away from Justin. Justin smiled at her, nodded, and as she was turned she found Mitch in front of her, his hands slipping around her waist to draw her against him. Her heart slammed against her ribs, her mind nothing but liquid. She couldn't think this through.