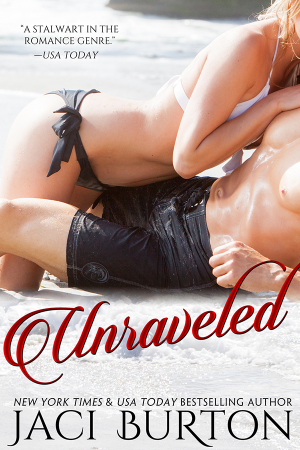 Mitch Magruder, former professional surfer, has built a dynasty of hotels since he retired. He’s on the hunt for his next big score, and when he’s back in his small Florida home town for the holidays, he’s found the ideal place to build his next luxury resort—right on the beach with a perfect view of the waves. But Greta Mason owns a ramshackle hotel that’s in his way and she isn’t willing to sell.

Greta’s held onto the small hotel her father left her with all of her heart. Divorced with two children to raise, this place is everything to her. And despite her former crush’s insistence that he can make all her dreams come true, she isn’t falling for Mitch Magruder—again. No matter how much his touch inflames her senses.

Helping out with Greta’s motel and spending hot, passion-filled nights with her has Mitch thinking of things he’s never imagined. Like permanence, love and happily ever after. Now he has to convince Greta that he really can make all her dreams come true, and they have nothing to do with romancing her hotel out from under her.

She pulled up into the driveway of her mom and dad’s house—despite Dad being gone it would always be their house—immediately noticing the strange car parked at the curb. Don’s car was next to hers in the driveway. She’d expected him and Suz to be there for the annual decorating of the tree. Jeff and Zoey would no doubt be in the pool along with Don and Suz’s two kids, thirteen-year-old twins Alana and Amanda.

So as usual, decorating night would be a total zoo. Just what she needed to keep her mind occupied.

She threw open the door, immediately assailed by the smell of pine trees, a scent so not indigenous to the central coast of Florida.

“Nice tree,” she said, tossing her bag on the table in the foyer. “Don pick that one out?”

Her mother, who always dressed bright and cheerful—today it was khaki capris and a flowered button-down shirt—nodded and looked up at the six-and-a-half-foot giant that nearly filled the small living room. She swept her silvery blond hair behind her ears and turned to Greta with a wide grin. “You bet he did. She’s a beauty, isn’t she?”

“In the kitchen sharing a beer with Mitch. You know he’s here for the holidays, don’t you?”

“Well, yes. He said he went by the motel to see you today, so I don’t know why you’re surprised.”

“Because he stopped by to say hello, and since Don was here they had a reunion of sorts, so I invited Mitch to stay for dinner.” Her mother came over and grasped her hands. “You look pale, Greta. Is something wrong?” She laid her palm across Greta’s forehead. “Hmm, no fever. You do look run down, though. Want me to take a shift at the motel?”

She backed away from her overly concerned mother. “No, I’m fine. Really.” She turned and headed toward the kitchen, intent on giving Mitch Magruder a piece of her mind.

She found him sitting at the kitchen table, sharing a beer with her brother, Don, both of them laughing. He glanced up when she entered the room, and her gaze caught an instant flare of heat in his eyes when he looked at her.

Her stomach fluttered and her nipples tightened. She had blown off men’s looks and advances ever since Cody, not wanting to invite attention, needing to focus on herself, her motel and her children.

Men didn’t interest her—not that way. And after what she’d gone through with Cody, it was easy to be turned off by anything having to do with the male species. But the way Mitch looked at her—reminded her for the first time in a very long time that she was a woman and she hadn’t had sex in… God, she couldn’t remember when the last time was.

But she wasn’t going to have sex with Mitch.

“You are so rude, brat.” Don stood and gave his little sister a hug.

She tilted her head back and glared at her big brother. “You know what he wants, don’t you?”

“Yeah. He wants to have dinner with us. What the hell’s the matter with you?”

Greta’s gaze returned to Mitch. “He came to the motel today. His big important company wants to buy the Crystal Sands.”

“Yeah, he told me.” Don moved back to the table to grab his beer.

“Oh, that,” her mother said, coming into the room. “Well, that’s up to you, I suppose. Did you make her a nice offer, Mitch?”

“Well, I’m glad. Greta, you should think about it. Dinner’s almost ready. Don, go tell Suz to drag the kids out of the pool.”

That’s it? They knew and they weren’t pissed? Shocked? Horrified? Throwing him out of the house? What the hell? “Did you hear what I said? He wants me to sell the motel.”

Her mother turned to her. “I heard you, Greta. I’m not deaf yet. Now go set the table.”

Exasperated, she let out a sound of disgust, grabbed the dishes and stalked into the dining room.

“Your mother threw the utensil basket at me and told me to come and help you.”

Her gaze shot to Mitch. “Forks on the left. Knives and spoons on the right.” She tried not to slam her mother’s dishes onto the table.

“I know where they go, Greta.” He followed behind her, laying down silverware after she put down the dishes. “Look, if my being here is going to upset you, I’ll leave.”

She stopped, inhaled, exhaled, then turned to him. “No, it’s fine. Sorry. You can stay.”

“Mom! Did you know Mitch was a world-class surfer?”

Greta turned and smiled at her son. “Yes, Jeff. I knew that.”

Jeff, her gorgeous, lanky twelve-year-old and budding surfer, clearly had a case of hero worship going on. “He said he’d work with me while he was here for the holidays.”

Mitch shrugged. “Sure. I’ve got nothing better to do so thought I’d hang out through Christmas.”

“Isn’t that great, Mom? Oh, and he’s going to take a room at the motel, too. Right there on the beach. I can take lessons from him every day now that I’m on holiday break. Isn’t that awesome?”

“Me too, Mommy. You said I could learn to surf when I was ten.”

She looked down at her golden-haired daughter. “Um…”

“You were about that age when I taught you to surf, if I recall correctly,” Mitch reminded her.

She looked up as Don entered the room, his arm draped around his pixie wife, Suz, who asked with a wide-eyed look, “Mitch was the one who taught you to surf?”

She fell into the nearest chair, defeated. “Yes.”

“It’s not every kid who can claim to have learned to ride a board from a world-class surfer. Mitch is famous, ya know.”

“Yeah, Mommy. Can we please?” Zoey cast her sweet, innocent eyes at Greta.

“You aren’t going to win this one, brat,” Don whispered over her shoulder.

“Apparently not.” But she sure hated the triumphant gleam in Mitch’s eyes.

“I’ll be by later tonight to check in.”

She nodded. “I’ll call ahead and let Heath know you’re coming so he can have your room ready.”

“Dinner’s ready,” her mother called from the kitchen. “Everyone start carrying things in.”

Greta rose and marched into the kitchen, feeling closed in and defeated. She’d come here for family support and they’d all rallied around Mitch instead.

But he still wasn’t going to buy her motel, no matter how much her family liked him.