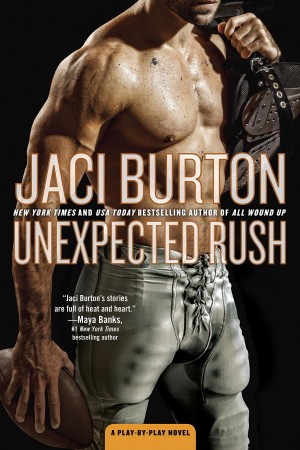 For Barrett Cassidy, playing defense for the Tampa Hawks is a dream come true. And now he may have discovered his dream woman. Harmony Evans, once the sweet, gawky teenage sister of his best friend and teammate has grown into a smart, gorgeous woman with moves he finds hard to resist. But he knows he can’t get involved with his best friend’s sister—it’s guy code.

Harmony has always gone after what she wants with single-minded determination, from her independence to her education to her career in interior design. She never expected her youthful crush on Barrett to develop into something deeper. And she’s not about to let some ridiculous man rules or her brother stand in her way.

When the chemistry is this combustible, lines tend to get crossed. And when Barrett and Harmony’s secret gets out, it just might be game over…

Harmony Evans tossed her purse on the kitchen table of her mother’s house and pulled up a chair next to her best friend, Alyssa. It was Thursday night—family dinner night at Mama’s house. Everyone was coming over, as it always was at Mamas. Right now she’d prefer to be sitting in the corner of a dark bar, nursing a dirty martini. She was going to have to settle for sweet tea because, short of death, you did not miss Thursday night dinner at Mama’s.

She’d already come in and kissed her mother, who was holding court in the living room with Harmony’s brother Drake and several of his friends, giving her time to catch up with Alyssa.

Alyssa laid her hand over Harmony’s and cast a look of concern. “Oh, no. Is it Levon?”

“I did not break up with him. He gave me the classic, ‘It’s not you, it’s me’ speech. He’s doing so much international travel with the law firm, and he just can’t devote enough time to the relationship, so it wouldn’t be fair to lead me on when he knows he can’t commit. He went on with more excuses but it was all blah blah blah after that.” She waved her hand back and forth.

Alyssa’s gaze narrowed. “What a prick. Why is it so damn hard to find a man of value, one who will respect a woman and give her honesty?”

“I have no idea.” Harmony pulled one of the empty glasses forward and poured from the pitcher that sat in the middle of the table, already filled with tea and ice and loaded with so much sugar she’d likely be awake all night. At this point, she didn’t care. She’d work it off in a gym session tomorrow. “All I know is I’m glad to be rid of him. It was bad enough his bathroom counter had more product on it than mine did.”

Alyssa laughed. “It’s for the best, Harmony. What does a man need on his counter besides a toothbrush, soap, deodorant and a razor?”

“According to Levon, there was stuff for his beard, trimming devices, facial scrub, moisturizer—separate ones for his face and his body. An entire manicure set for his nails, to use when he wasn’t off getting mani-pedis of course.”

“Of course,” Alyssa said, then giggled.

“Oh, and the scents. Let’s not forget his entire rack of colognes.”

“I think he owned more perfume than I do.”

“Never a good sign. See? You dodged a bullet.”

Alyssa lifted her glass. “Let’s toast to that.”

They clinked glasses. “To men we’re lucky to have not ended up with,” Harmony said.

“What are we toasting to?”

Harmony looked up to find Barrett Cassidy standing at the kitchen table. He was her brother Drake’s best friend and teammate, and since the guys both played for the Tampa Hawks football team, and Barrett also lived in Tampa, it meant she’d often see Barrett at Mama’s house house for dinner. Along with several other members of the Hawks football team.

One of the nicest things about living in Tampa, as a matter of fact. She’d often thought it fortuitous that her brother had been drafted by the hometown team. It had kept him close to home all these years, and of course, one couldn’t complain about the awesome eye candy her brother brought home now and then.

“We’re toasting the end of Harmony’s relationship with a man who was absolutely not right for her,” Alyssa said.

Barrett arched a brow, then gave Harmony a sympathetic look. “Really. Sorry about that.”

Harmony shrugged. “Nothing to be sorry about. Alyssa’s right. He wasn’t the man for me.”

She could tell this was uncomfortable for him. “Come on. Sit down and have a glass of iced tea with us.”

“I’m not sure I want to wade into these waters. Breakups are not my territory.”

“Oh, come on, Barrett. Surely you’ve dumped a woman before,” Harmony said, pouring him a glass. When he didn’t answer, she added, “Or you’ve been dumped.”

He pulled out a chair and sat. She’d never realized before how utterly . . . big he was. He’d always kept his distance from her, preferring to hang with Drake, so this was the closest she’d ever been to him. Both he and Drake played defense for the Hawks. Like her brother, Barrett was absolutely pure muscle. But she never paid attention to Drake. Barrett, though? Oh, yes. Just watching the way his muscles flexed as he moved was like watching liquid art. She could stare at his arms for hours, but she tried not to ogle. Too much, anyway.

“I’ve been dumped before, sure,” Barrett said. “And maybe I’ve broken up with a woman or two.”

Alyssa leaned close to Harmony. “He’s downplaying being the one who dumped the woman.”

“I meant for you to hear me, Barrett. You’re just trying to be the good guy right now because we’re roasting the not so good guys.”

Barrett narrowed his gaze. “I told you I shouldn’t be sitting here. If you both want to bad-mouth my species—which you have a right to since some asshole broke up with you, Harmony—then I should leave. Also, I’d suggest something stronger than iced tea. It helps.”

So maybe he had been dumped before. It sounded like he knew how to get through it.

“It’s okay, Barrett,” Harmony said. “Me getting dumped is definitely not your fault. I’m not as broken up about it as I should be, all things considered. So you’re safe here.”

Besides, looking at Barrett could definitely make her forget all about Levon and his prissy bathroom counter. She wondered how many items Barrett kept on his bathroom counter? She’d just bet not many.

She turned her chair toward him, determined to find out. “Actually, I have a ridiculous question for you, Barrett.”

He turned his gorgeous blue eyes on her and smiled. “Shoot.”

“How many items currently reside on your bathroom counter?”

“We’re conducting a poll about men and their bathrooms,” Alyssa said. “Indulge us.”

Harmony smiled when Barrett struggled to come up with anything else. She knew he was an absolute male of the not-so-fussy-about-his-grooming variety.

He finally cast her a helpless look. “I don’t know. I’ve got nothin’ else. Did I fail?”

“Oh, no,” Harmony said. “You most definitely passed.”

“You should go out with Barrett,” Alyssa suggested, nudging Harmony. “He’s a nice guy, and he obviously doesn’t keep thirty-seven things on his bathroom counter.”

Barrett laughed. “Yeah, and Drake would kill us both. Well, he’d definitely kill me.”

The idea of it appealed, though. She’d had such a crush on Barrett when Drake had first introduced them all those years ago. And now? Hmm. Yeah, definitely appealing.

“What my brother doesn’t know won’t hurt him—or you. What do you say, Barrett? Care to take me out?”

Barrett was at a loss for words. Harmony was his best friend’s little sister.

Only she wasn’t so little anymore.

He and Drake had been friends since sophomore year of college and had bonded then. They’d celebrated when they’d both been drafted by Tampa. Both of them played defense, they’d been roommates in college, and they’d become friends. It had been that way ever since.

He’d been coming to Drake’s mom’s house ever since college. Harmony had been just getting out of high school back then. She’d only been a kid. Now she was a woman, with a career of her own, and she’d just been dumped by some guy obviously too stupid to know what a treasure he’d had.

She was beautiful, with dark brown skin, straight dark hair that teased her perfect shoulders and those amazing amber eyes. She had the kind of body any man would want to get his hands on, curves in all the right places, and that sweet, kissable mouth . . .

And he had no business thinking about Harmony at all because there was a code—no messing with your best friend’s sister.

Absolutely not. No. Wasn’t going to happen.

He pushed back his chair and stood, looking down at Harmony as if she was Eve in the garden and she’d just offered him the forbidden apple. “I know the rule, Harmony, and so do you. I think I’ll go check out what your mom made for dinner tonight.”

He might be tempted, but there was too much at stake. He was going to step away from the sweet fruit laid out in front of him before he decided to do something really stupid and take a taste.

Because going down that road would spell nothing but doom.