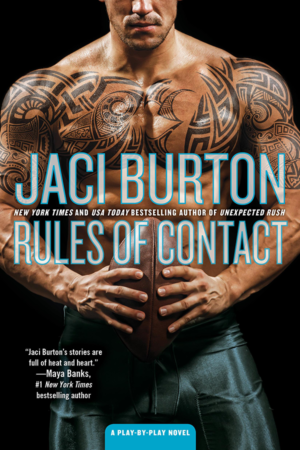 A football player with all the right moves on the field needs a better game plan for his love life.

A defensive end for the San Francisco Sabers, Flynn Cassidy is used to being in the spotlight—he just doesn’t enjoy it. But if getting in front of the cameras will help his new restaurant succeed, he’s willing. Now if he could just meet a woman who loved him and not his fame…

After her divorce, Amelia Lawrence is thrilled to start over as head chef at Ninety-Two. It’s just the opportunity she needs to heat up her career—if only she wasn’t wildly attracted to her sexy new boss. Their chemistry might be sizzling hot, but Amelia has no intention of being burned again.

Amelia is genuine and fun and Flynn can’t get enough of her—and Amelia loves every second she spends with the tough but tender Flynn. But trust is a hard fought battle for both of them. Breaking the rules of contact and surrendering to their passion was easy, but are they willing to risk their hearts to win at the game of love?

Of all the things on Flynn Cassidy’s bucket list, opening a restaurant hadn’t been anywhere even close to his top ten. Yet here he was, sitting at one of the corner tables of Ninety-Two, his new restaurant in San Francisco. He marveled that at some point in his life, cooking had joined playing football on the list of things he loved the most.

If someone had told him five years ago he was going to open his own restaurant, he’d have told them they were full of shit. But look at him now, owner of his own place.

Ninety-Two was shiny and new—sort of. He’d had the old building renovated after he’d bought the property, so it still felt like it belonged in this neighborhood. He made sure it didn’t look too trendy, keeping a lot of the original details intact both inside and out. He was more in favor of restaurants that felt comfortable—like home. He wanted his customers to feel as if they could come in, sit down, and feel at ease.

They’d been filled to capacity since they opened two weeks ago and so far things were going well. He took that as a sign that his inclination to keep it simple appealed to others as well. Besides, it was damn good food, he’d made sure of that. But still, opening a restaurant was a risky proposition and he didn’t want to get too cocky. He knew Ninety-Two needed all the good press and attention it could get. Which was why he was sitting here. Right now one of the major entertainment media outlets was doing a feature on the restaurant. Great for publicity, but it meant camera crews, bright lights and a lot of damn people in the way of regular business. He had already wandered around and apologized to his patrons, who seemed to take it all in stride. He hoped the crews would grab all the film and sound bites they wanted and get the hell out shortly.

“This is so thrilling, Flynn.”

He dragged his gaze away from the camera crews and onto Natalie, the woman he’d been dating the past few weeks. She was a looker, for sure, with beautiful auburn brown hair that teased her shoulders and the most incredible green eyes he’d ever seen.

“Yeah, thrilling isn’t the first thing that popped into my head when the crews showed up today.”

Natalie grabbed his hand. “Oh, come on. Who doesn’t want to be on TV?”

Him, for one. As a defensive end for the San Francisco Sabers football team, he had plenty of cameras and microphones shoved in his face over the years. It was the last thing he wanted now, when his fledgling restaurant was just getting off the ground. But since the restaurant was new, he wouldn’t turn down some publicity for it. So he’d done the interview and now he just wanted to stay out of the way while the film crew got their overview shots.

“Do you think they’ll want to get some film of the two of us together?” Natalie asked. “You know, kind of get some background on your personal life, like what you do on your off time away from football and the restaurant, who you’re seeing, stuff like that?”

Warning bells clanged loud and hard in Flynn’s head. He’d gone down this road with more than one woman, and had ended relationships because of women who were way more interested in the limelight than in him.

Lately he’d been careful to steer clear of any woman who had an entertainment background. No models, no actresses, no one he could suspect of chasing face time in front of a camera. He figured since Natalie was a financial analyst, he was safe.

But seeing her gaze track those cameras like a vampire craving blood, he wasn’t sure career choice had much to do with someone hungering to get their fifteen minutes of fame.

He didn’t understand it. Not at all.

“Maybe we should move to one of the more prominent tables, Flynn,” Natalie said. “You know, that way we might be in one of the camera shots.”

She pushed back her chair and stood, ignoring him. “I’m going to go to the bar and get a drink. You know, all casual like, and see if maybe they notice me.”

He leaned back in his chair. “Sure. You do that.”

This relationship was doomed. Just one of the many Flynn had seen go down in flames in the past couple of years. He bit back the rising anger over having yet another woman use him to get her time in the spotlight.

What the hell was wrong with him that women craved camera time instead of just being with him? Yeah, he was a football player, and maybe that held some appeal, but he was also a nice guy who had something to offer besides photo ops. He was getting damn tired of playing this game with every woman he dated.

Maybe there wasn’t a woman out there who was interested in him. Just him. Not Flynn the football player. Just Flynn the guy.

He shook his head, mentally notched up another failure, and took a long swallow of his beer.

Since orders had slowed down and she had the kitchen under control, Amelia Lawrence washed her hands in the sink and tried to hide, avoiding the cameras. The last thing she wanted was to be on television. She was head chef at Ninety-Two. This whole publicity thing was on Flynn and she didn’t need to be interviewed, filmed or in any way noticed.

But as she did her best game of hide and not be sought, she also spotted Flynn’s new girlfriend do her best job to try and be seen by any of the camera crew.

Oh, no. Not another one of those kind of women.

She’d worked with Flynn the past couple of months, even before Ninety-Two had opened. And in that time period she’d seen him go through no less than three women, all of whom seemed to be way more interested in his prowess as camera fodder than anything else.

She felt bad for him, and nothing but disdain for the women who couldn’t appreciate what a fine man Flynn Cassidy was.

He was supremely tall and ridiculously well built, with a thick mane of black hair and amazing blue eyes. She could spend at least a full day doing nothing but ogling his tattoos. And who didn’t love football? Plus, the man had fine culinary taste. When he’d hired her, they’d spent several weeks designing the menu for the restaurant. She had to admit, he had good ideas.

So did she, and she appreciated that he listened to hers, and had been willing to blend their ideas for the final menu. She loved the way it turned out and her estimation of Flynn had risen. In the past she’d worked for her share of egomaniacs who insisted it was their way or the highway, but Flynn wasn’t like that. He was willing to collaborate. He also liked to crack jokes, he was kind to the employees, and seemed like a nice guy.

So why couldn’t the man find a decent girlfriend? He kind of sucked at it, actually. If she was a native to San Francisco maybe she could help him out, but she’d only moved here recently from Portland. Her only ties in the city were her best friend from college and her friend’s husband. Otherwise, she was pretty much alone. She’d rented a house not too far from the restaurant, and she was getting out in the neighborhood and meeting people there.

She knew it would take time to form a circle of close friends, but even with her limited contacts she guessed she could find better women for Flynn to date than the ones he’d been parading in and out of the restaurant lately. She could spot posers a mile away. Maybe she could offer her services to Flynn.

Pulling her focus away from Flynn, she put her attention on the incoming orders, on directing her staff, on minding her own business, and not on Flynn’s girlfriend who was currently preening for the cameras as if she was auditioning for the next blockbuster movie.

With an eye roll, she dismissed the woman and set about making scallops.

Because Flynn Cassidy was decidedly not her problem. And no matter how sorry she felt for him, she wasn’t going to get involved in his personal life.