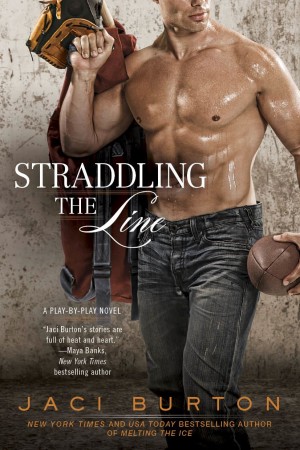 Trevor Shay has it all–a successful football and baseball career, and any woman he wants. But when he finds out his college mentor’s daughter is in trouble, he drops everything to come to her aid.

Haven Briscoe has finally landed a dream job as a sportscaster for a major network. But she hasn’t been able to move past the recent death of her beloved father, and it’s affecting her career. A plum assignment following the daily life of sports superstar Trevor Shay might be just the inspiration she needs…

Trevor will do anything to spark life back into Haven, including letting her into every aspect of his world. The chemistry between them flames higher than one of Trevor’s home runs and faster than his dashes to the end zone. But as they grow closer, Haven stumbles onto Trevor’s closely guarded secret, one he’s hidden his entire life. And despite his protests, now it’s Haven’s turn to put everything on hold to help Trevor. Will he let her in and trust her with a secret that could blow his professional and personal world apart?

Straddling the Line: Book 8 in the Play-by-Play Series

Those were words Trevor Shay never wanted to hear, especially not less than a year after the death of Haven’s dad, Bill.

Bill Briscoe had been more than just a dorm parent back in Trevor’s college days. He and his wife, Ginger, had been like substitute parents, especially to Trevor, who’d needed guidance more than the rest of them.

And now he sat in Ginger’s living room, in a house he’d once thought of as his second home.

Trevor had always counted on Ginger’s confidence, that smile and optimism that had assured him everything was going to be all right.

He picked up her hand. “What’s wrong?”

“She hasn’t been herself since Bill died. You know Haven. She’s always been upbeat, and she’d come to grips with the eventuality of Bill’s death.” Ginger took a deep breath. “As we all did.”

“It wasn’t like we all didn’t know it was coming. Bill prepared us all for it, made sure we were ready. Never thinking of himself.”

He saw the tears welling in her eyes and wished he could take them away.

She grabbed a tissue. “He’d kick my butt if he saw me cryin’ over him. But Haven, she has a great life and an amazing future. She got a job with the network as a sports journalist.”

Trevor smiled. “I heard about that.”

“It’s an amazing opportunity for her. One she should be seizing. I told her that her father would be so proud of her.”

“Instead, what is she doing? She’s thinking about quitting the job and coming back here to live with me.”

Trevor leaned back and frowned. “Coming back here? Why?”

“I don’t know. She said something about getting a job at the local TV station instead.”

“Is that what she really wants?”

“I don’t think so.” Ginger leaned forward. “Trevor, I don’t know what to do. She hasn’t even given this new job a shot. I think she’s scared, and without her dad, she feels alone for the first time in her life.”

“She’s not alone, Miss Ginger. She has you.”

“I know that. And believe me, I don’t feel slighted in the least. I know Haven loves me. I also know she’s worried about me being here all alone. I don’t want her to make a mistake and screw up the best job she might ever have because of me, and because of her fear.”

She paused, took a breath. “I was hoping you could offer me some advice, tell me what I could say to her to make her stay in her job.”

Trevor thought about it a minute. “Let me see what I can do about that.”

“Thank you. I know you’re big in the sports world, and I don’t know if there’s anything you can do for her, but gosh, I’d sure appreciate anything. Anything at all.”

An idea formed in his head. He had the pull. He could get this done. And he’d do anything for Ginger, and to honor Bill’s memory. Haven needed help, and he sure as hell was in a position to help her.

He spent the day with Ginger, and honestly, it was great to see her again, to while away the hours talking about Bill, reminiscing about college life. Besides, she fixed him lunch, and he loved her home cooked meals. Hours later as he sat on the plane on his way back to St. Louis for a game, Trevor already had the plan formulated. The media were constantly hounding him for an feature story on his life and career. After all, it wasn’t too many athletes who played multiple sports. At least not too many who played them well. He’d been closed off to the idea of it for a lot of reasons.

He leaned back in his seat and smiled.

Now it was Haven’s turn to shine. And he was just the person to make it happen.

Haven tried to muster up enough saliva to swallow as she pressed the button to return the phone call she’d missed from her boss.

She knew what was on the other end of that phone call.

Her ass was going to be fired, less than six weeks after she’d gotten the job of a lifetime.

It would have been much better if she could have resigned. It would have looked better on her résumé, but then again, what did she care? Her career in journalism was over anyway, right?

Never quit. Whatever you do, Haven, never give up on anything until you’re sure you’ve given it everything you have.

Her father’s words rang in her ears, guilt squeezing her stomach until nausea caused her fingers to pause on the call button of her phone.

It was too late to beg to keep her job. She’d already passed up multiple travel assignments, content to do the local ones, then sit in her apartment in New York, dwelling on how much she missed home, her mom.

This wasn’t the right career for her. She’d made a mistake accepting this job. She wasn’t cut out for the rigors of sports news—the travel, the insane schedule, the arrogant athletes.

What was she thinking? Her father hadn’t even been gone a year yet.

She couldn’t do it.

Be brave, Haven. You can do anything, be anything you want to be. Just be happy.

Tears pricked her eyes and she swiped them away as every conversation they’d had those last few weeks replayed in a reel over and over in her head.

She didn’t know how to be happy without hearing her father’s laugh, seeing his smiling face, being able to pick up the phone and talk to him every day.

Who was she going to go to when she needed advice?

She loved her mother, and in the ways of relationships and men and things like that, she had always gone to her mom.

But her dad—he’d been her buddy. She’d learned about sports from her father, had sat next to him and watched football, baseball, hockey, and every sport imaginable. He’d taught her balls and strikes in baseball and the difference between a post pattern and a shovel pass in football. They’d driven up to St. Louis together and taken in all the professional sports. She’d never been more content than to sit next to her dad and watch games with him.

She’d learned to love sports because of her dad.

She’d gone after this job because of him.

And now she was going to be fired because she hadn’t had the energy after his death to do this job she’d wanted for years. For that, she only had herself to blame.

“I’m sorry, Dad,” she said, then pushed the call button on her phone. It rang. She was hoping for voice mail.

“Haven. I’ve been waiting for you to call.”

She cringed as the loud and very no-nonsense voice of her boss, Chandler Adams, came on the line.

“Well, untie yourself. I have a job for you.”

“Great. We’re going to do his bio. A whole feature on the life of Trevor Shay. Personal and professional. We’ve been after him for years to do this, and he kept putting us off, until now. He’s finally agreed to let us do the feature, and he’s asked for you.”

“Yeah. Says you two go way back to college.”

“Then it’s a damn good thing we hired you, Haven. Pack a bag. You’ll meet him at his place in St. Louis to get everything set up. Narrative and background first, and then we’ll get camera work involved later.”

Was she in some alternate universe? She hadn’t been fired. In fact, she’d just been assigned to interview one of the biggest stars in the sports world right now.

“Okay. Sure. Thanks, Chandler.”

“No, problem. I’ll e-mail you the specs on what we’re looking for from you on this, Haven. This assignment’s going to take a while, so clear your calendar.”

When she hung up, she sat back and stared out the window of her very tiny apartment, stunned that she hadn’t been kicked out the door. She’d been mentally prepared, and as she stared at the boxes in her apartment, already half packed, set in her mind that she was going to head back to Oklahoma to be near her mother, her roots.

Where memories of her dad were.

Now she had to change her focus.

Why had she agreed to do this interview? This job wasn’t what she wanted to do anymore.

She sat on the bed.

She still heard her dad’s voice so clearly in her head. Maybe he was trying to tell her something. She didn’t know if this was her dream anymore, but she’d agreed to take this job.

With Trevor Shay, of all people. She hadn’t seen Trevor since her dad’s funeral. She wondered how he’d react knowing it was her doing this assignment.

He’d probably ignore her, just like he had in college.

No, wait. He’d specifically asked for her. He’d agreed to the interviews, so this time, she wouldn’t allow him to pretend she didn’t exist.

She got up and went to her closet to grab her suitcase.

Her and Trevor Shay. God, she’d had such a crush on him in college, back when she was tutoring him. All those nights they spent shoulder to shoulder, when she’d done her best to try to persuade him to focus on his books, when all she’d really wanted was for him to notice her as a woman.

He’d been more interested in trying to finagle a way to get her to do his homework.

Now she was going to be in the driver’s seat.

She stared out over the boxes, debating whether to unpack them.

She’d leave them, see how this assignment went. If it didn’t work out, if it didn’t light the fire under her after a few days, she’d call Chandler and tell him she was out.

But she’d give it a try. For her dad.