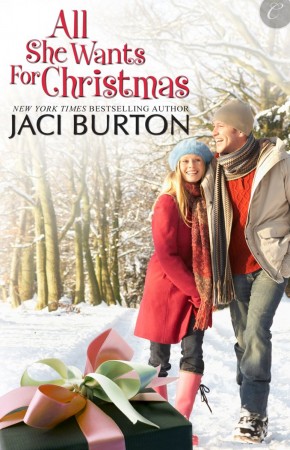 Country singer Riley Jensen would never have returned to her small Missouri hometown if her publicist hadn’t come up with the scheme to tape a Christmas special there. So she never would have known that the man who broke her heart at eighteen—causing her to flee to Nashville—was now a widower with a seven-year-old daughter. Riley has ten years of angst-filled hit songs and Grammy awards to prove she doesn’t need Ethan Kent. But suddenly, she can’t help thinking of all she gave up by running away…

Ethan Kent knew Riley had the talent and the drive to make it as a singer. He also knew she wasn’t going anywhere if she stayed in their nowhere town for him. Then one night and one huge mistake sent her running on the road to fame. Which doesn’t mean he ever stopped loving her…

But with so much separating them, can Riley and Ethan find their way back together one magical country Christmas.

You can read All She Wants for Christmas three ways.

Or in a multi-author collection – Naughty and Nice – containing All She Wants For Christmas and three other contemporary romances from Shannon Stacey, Lauren Dane and Megan Hart. Naughty and Nice can be purchased at a discounted price from the four individual novellas. 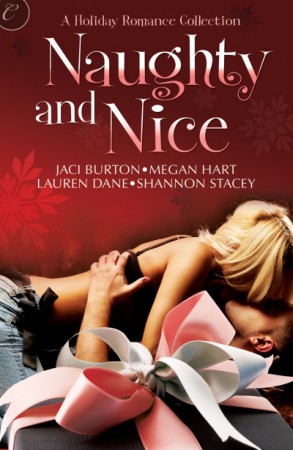 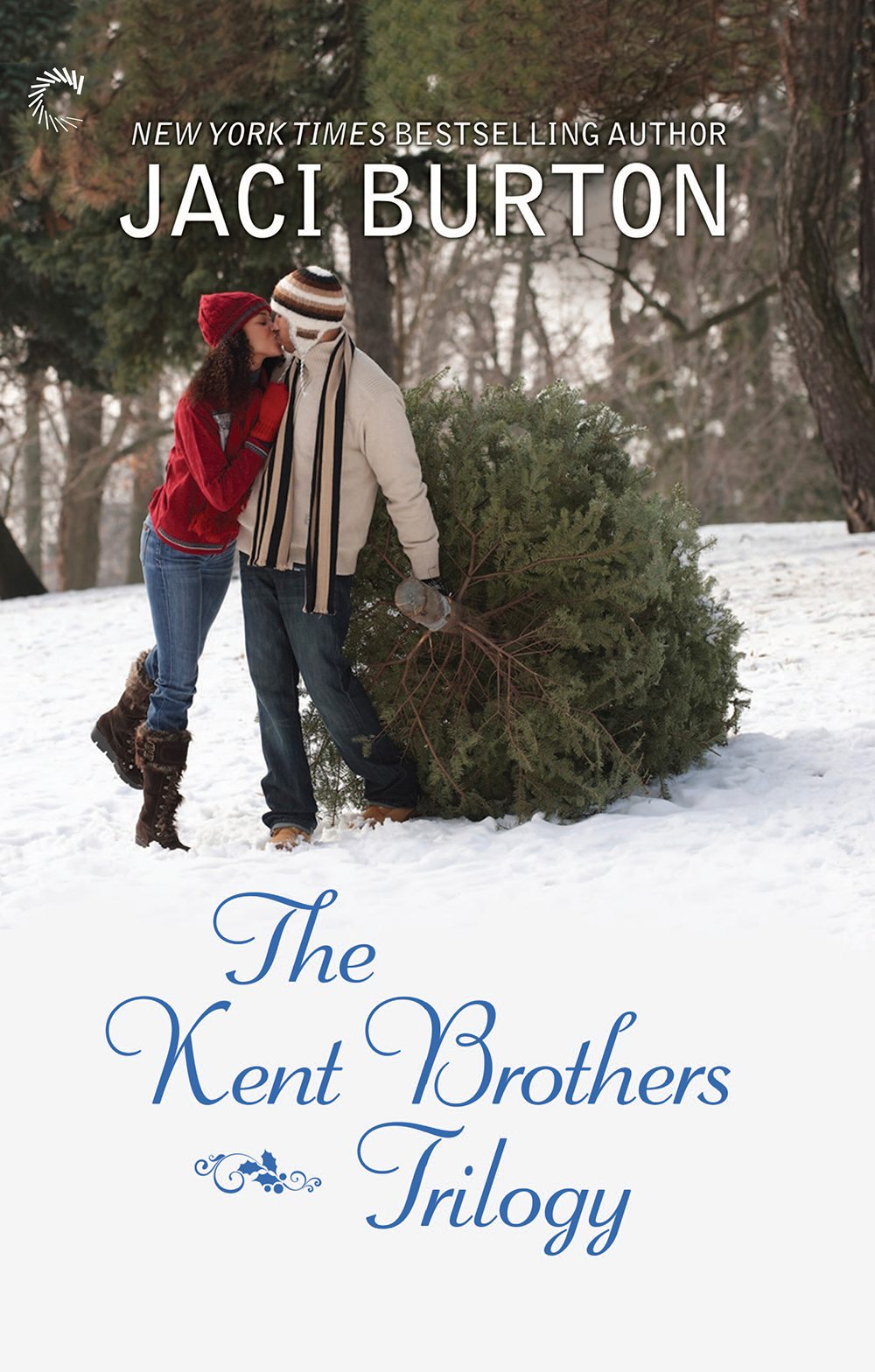 All She Wants for Christmas: Book 1 in the Kent Brothers Series

“This is your home town? This tiny little blip in the middle of nowhere?”

“Yeah, this is it.” Riley Jensen tensed as the tour bus pulled down Central Street. In ten years, nothing much had changed. The post office was still there and so was the hardware store, the clothing shop that was probably still owned by busybody Charlene Talmage, and the diner on the corner where her foster mother used to drag her on Saturdays so she could gossip with all her friends. The five and dime still stood in the center of all the chaos.

“And you said people wouldn’t come.” Riley’s publicist stretched her long, lithe body across the leather seats and peered out the darkened privacy glass. “The streets are lined with people.” Joann turned to Riley. “See? Your town still loves you.”

Riley sniffed. “My town just wants to be on television and they know I come with photographers and a TV crew.”

Joann tsked. “So cynical for one so young.”

Jo swiveled and gave her an eye roll. “You’re twenty-eight, not anywhere close to thirty, and you’re hardly headed for the rocking chair, so knock it off, put on your biggest smile and get ready to greet your hometown fans. It’s show time.”

Show time. Hometown. She hadn’t been home since she’d bought a bus ticket ten years ago and ran like hell from Deer Lake. And she’d never once looked back, come back or wanted to, until Joann and her agent, Suzie, convinced her—no, forced her—to make this trek in order to film part of the biography special in her hometown.

Why Deer Lake agreed to it considering she hadn’t once stepped foot in this place in the ten years she’d been gone wasn’t because they loved their long lost home town gal. They should hate her for turning her back on them, for never coming back, for never once giving back to the town that had raised her.

Jo held Riley’s jacket in front of her. “You ready?”

“Ready as I’ll ever be.” She slid into the warm suede and took another look at the woman in the mirror. She was so different from the girl she’d been when she’d left ten years ago. Back then she’d been scared out of her mind when she’d bought the one-way ticket to Nashville with nothing but a few clothes in her suitcase, her guitar and the money she’d saved working at both the movie theater and the restaurant.

“They’re proud of their hometown girl, Riley. Grammy Awards, ACMs, CMAs. You name it, you’ve won them all. They know that and they want to celebrate you.”

“They know that and they want to capitalize on me.”

Jo cocked her head to the side, her dark hair pulled back in a loose ponytail, her lips painted a deep, dark red Riley could have never pulled off. “Girl, you are so mistrustful of your town. Get a grip.”

Riley swallowed past the lump in her throat. She was never nervous on stage. She lived for the spotlight. But facing down a few hundred townsfolk—people she’d known since she was a kid—yeah, that got her knees shaking.

At least she could take comfort in the fact there was a less than zero chance Ethan Kent and Amanda Richfield would be out there. She was positive neither of them would want to see her any more than she’d want to see them.

“Let’s just get this meet and greet over with, okay?”

She took a step toward the door, but Jo put up her hand. “As soon as all the cameras are in place.”

Apparently not. One of those true story television shows wanted her biography, claimed she had a rich life history and people wanted to know about it. They’d already filmed some concert footage as well as face time with her at her home in Nashville. She thought the whole thing was ridiculous. She was still single, had no kids, hadn’t been on drugs or been to prison, didn’t hang out at the clubs and party, and spent most of the year on the road. When she wasn’t touring she was in the studio writing and recording music.

But the producers and Jo and Suzie thought where she came from was interesting. Sure, her daddy had died when she was a baby and her momma had run off not long after that, leaving her in the custody of foster care, but that wasn’t much different than what a lot of kids went through. Didn’t make her special. She’d had nice foster parents. No one beat her or abused her. She’d had an okay childhood, and she’d been a damn lucky adult so far, which still in her mind didn’t make for interesting television.

“Cameras are in place, now, Riley. Ready to rock and roll?”

But today she’d be giving a different kind of performance. Today she’d have to pretend she was happy to be back home again.

If she passed out would she still have to do this? Maybe if she fainted they’d drag her back onto the bus and she could go home. The bio producers would rethink this whole thing. They’d call her a silly diva, not worth their time.

You can do this. These people don’t know you anymore. All she had to do was play to the crowd like it was a concert in any city.

Okay, maybe she could do this as long as she didn’t make eye contact with anyone. She looked over the crowd, not at them.

She was invisible. She wasn’t really here. She was at home watching reruns ofBewitched.

“Riley! Riley! Riley! Can you see me?” Reality intruded and she couldn’t help but hear the high-pitched squeals in front of her. She focused her gaze on the little girl in the front row. Wow, there was a tiny explosion of pink. Bundled up in her pink down coat with her pink hat and pink gloves and matching pink boots, her dark pigtails contrasting against the cotton candy color of her coat, the little girl looked like a tiny fan girl maniac. Riley grinned.

“Hi, Riley Jensen! I love your music, Riley Jensen! My daddy and me waited all day for you.” She pulled back and gave Riley a big, brown-eyed grin. “Gosh you’re pretty. I got my nails painted just for today.” The little girl pulled off her glove. “Aren’t they pretty, Riley Jensen?”

And that’s why Riley loved kids. She examined the child’s fingers. “Wow, those are awesome. Pink’s my favorite color, you know.”

“That’s what my daddy says. He knows you. Says you two went to school together.”

“Is that right?” She scanned the crowd and settled her gaze on a man standing just beyond the little girl, her heart jerking in response.

This—this was why she hadn’t wanted to come back.

Or rather he was why she hadn’t wanted to come back.

He was why she’d run ten years ago. She straightened and looked into the deep amber eyes of the one man she’d never hoped to see again.

She felt the tug on her coat and looked down at the little girl, who grinned up at her. “Riley Jensen, that’s my daddy.”

“I absolutely adored this story. It was sweet, romantic, heart breaking, and full of holiday cheer.”

— Books According to Nicole
“