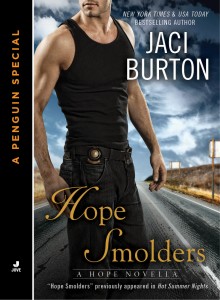 HOPE SMOLDERS, the introductory novella to the Hope series, has been released today as a digital standalone novella. HOPE SMOLDERS was released last year in the Hot Summer Nights anthology, so if you bought and read it then, no need to do it again. However, if you missed it in the anthology and want to read it now, you can buy it today!

Jane Kline is a struggling divorcee and single mother with a social life on hold. Not only does Jane not have the time to date anyone, she’s not even going to consider making herself vulnerable to another man after being deserted by her husband. That’s why Will Griffin, her ex’s former best friend, takes her totally by surprise.

What would such a hot and sexy wild card see in a harried mother juggling two kids and two jobs? For starters, everything Jane no longer sees in herself. As she dares to take the flirtation to the next step, Jane finds herself back where she never wanted to be—falling for another man. Now it’s up to Will to convince Jane that she has everything he wants in a woman, and that the second time around can be the best time of all.

You can purchase HOPE SMOLDERS at the following locations: