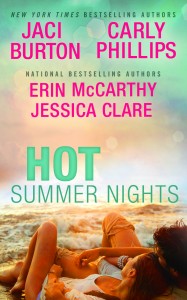 HOT SUMMER NIGHTS releases in a week! I’m very excited this anthology, because it’s the debut of the introductory novella to my brand new HOPE contemporary romance series.

I loved writing HOPE SMOLDERS in the HOT SUMMER NIGHTS anthology. Jane is wounded from her first marriage, and hesitant to get involved with anyone. She believes life is all about caring for her two kids, making the mortgage payment and paying the rest of the bills. All the fun has gone out of her life in the past few years. Until she runs into Will Griffin, her ex husband’s former best friend. Will’s convinced that Jane needs to have fun again, and he thinks he’s just the guy to show her how.

Excerpt below, and a link to preorder the book, which also includes awesome stories by rockin’ authors Carly Phillips, Erin McCarthy and Jessica Clare.

It must have been more than a second because she felt disoriented, like maybe she’d allowed herself to fall asleep. She blinked and opened her eyes to find a sweaty hunk of beefcake standing in front of her. She shielded her eyes from the setting sun, unable to make out his face until he moved out of the shadow of the sun.

Will. Again? Why was she suddenly running into him a lot when she rarely ever saw him?

“Oh. Will. Hi. What are you doing here?” Other than catching her napping when she should be watching her kids. She made a quick search. Tabitha was still screaming down the slides with Heather, and Ryan had the football tucked under his arm, his buddies going all out to try and tackle him.

And she’d been passed out on the bench.

Wasn’t she just mother of the year?

“I was taking a run in the park, saw you sitting here.”

“I sure am seeing a lot of you lately.”

“I switched from nights to days.”

His lips curved. “Of course you did. Is there anything in this town that isn’t broadcast somewhere?”

“No. There’s a daily gossip update via social media. You can’t have secrets in Hope. Don’t even try. We even know what brand of toilet paper you buy via our spies at the grocery store.”

He laughed. “I’m going to assume you’re kidding about that.”

“Now that’s a scary thought.” He looked around. “Are the kids in the playground?”

“Yes. Over there,” she said with a nod of her head, grateful she’d been wearing her sunglasses so maybe he wouldn’t notice she’d been asleep.

He turned and she took a moment to check out his muscles, lean body, and long legs. Did the man have to be tanned and in such great shape? She wanted to not be in her yoga pants and a T-shirt, both more than a few years old. She’d just tossed the outfit on for the walk and now she looked down with a critical eye. The yoga pants were old and faded, but supremely comfortable, because really, once she got home, who cared? It wasn’t like she was trying to impress anyone.

And she sure wasn’t trying to impress Will.

“Wow, the kids have gotten so big. Ryan looks a lot like Vic.”

Her gaze wandered over to where Ryan was dashing for some imaginary end zone, a wide grin on his face. She smiled wistfully. “Yes, he does.”

Will took a seat next to her. “Have you heard from him?”

“I’m sorry for not coming over, too.”

Coming over? Why would he want to do that? “My family isn’t your responsibility. It’s Vic’s.”

“Still, I could have been there to help you through this. I guess I thought maybe you wouldn’t want to see me, that I’d remind you of what you lost.”

She frowned. “That’s ridiculous. You had nothing to do with him leaving.”

“But he and I were best friends. I should have seen it coming.”

She let out a very unladylike snort. “I was married to him. I lived with him every day. I shared his life. And I didn’t see it coming. Neither did his parents. So unless you’re some kind of psychic, I don’t think you had an edge on knowing he was going to abruptly check out of marriage and fatherhood without letting anyone know.”

Will stared out over the playground. “I know it’s been two years, but I still can’t believe he just up and disappeared without a word, that he hasn’t contacted you.”

“Oh, we were in contact through his attorney—at least long enough for him to sign the divorce papers.”

“Maybe he figured he was so screwed up that he was doing you a favor.”

“Some favor,” she said with a laugh. “Leaving me and the kids and then disappearing so well I can’t find him in order to get him to pay child support.”

“Jesus.” Will shoved his fingers through his hair and looked down at the ground. “I had no idea it was that bad.”

Wasn’t she a brilliant conversationalist? She could bring down a chat in three seconds flat. God, how depressing could she be?

She stood. “It’s not that bad, Will. The kids and I are doing just fine.” She hollered for Tabitha and Ryan, then turned to him. “Great to see you again.”

Will’s gaze was intense as he stood and came to stand beside her. “You don’t have to go, Jane.”

“Yes, I do.It’s late and it’s getting cool out here. I have papers to grade and the kids have homework. I’ll see you around.”

She gathered up the kids and headed down the street before she poured out her heart and soul and wept on Will’s shoulder, the absolute last thing she wanted to do.

She was strong, and a survivor. She hated those looks of sympathy and pity from anyone, especially Will.

Her life was just freaking fine.