The ever awesome Beth Kery has a new book releasing this week. Check it out! (Beth’s providing the giveaway at the end, so read all the good stuff in between, okay?) 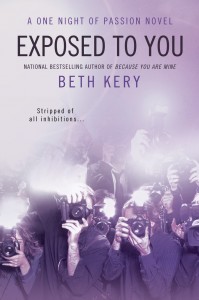 It’s not often you’re hired to paint a body tattoo—and what a body—on a total stranger at a Hollywood film set. A reserved and careful art teacher, Joy would never forget it. In a rare fit of raw desire she gave herself completely, knowing she’d never see him again, or ever repeat such a shameless, naked impulse.

Little did she know, the man with whom she shared that lightning bolt of lust was star Everett Hughes. For Everett, women and sex came as easily as fame. But how could he hope to convince the guarded Joy that beneath the hard body and sexy façade of celebrity was a real man who wanted only one, real woman?

In the heat of an intoxicating affair, Everett endeavors to break down her barriers, gain her trust, and expose himself as the real deal. But can Joy do the same, and reveal to him the vulnerable woman who longs to be loved, wanted, and desired forever?

Excerpt and more after the jump

She had the strangest sensation seeing his eyes peering through the elaborate costume he wore, as if she’d caught a glimpse of his soul through the beautiful artifice. Seth’s makeup, which subtly alluded to the emerging humanity of the sea creature, only added to the impression. The body paints included brilliant blues and greens, but flesh colors rippled and swirled over chiseled muscle and bone as well, creating a stunning living landscape. He was beyond beautiful, the subtle shadowing wrought by the air- and paintbrushes highlighting every ridge and smooth, hard plane of his long body.

She became aware that she was holding both sides of her cotton hoodie wide open in preparation to remove it. Her breasts felt tight suddenly, straining against the fabric of her bra and a thin layer of her cotton tank top. Her nipples beaded, as if he’d reached out and brushed a finger over the sensitive flesh instead of just glancing at her.

She blushed, her reaction surprising her. Joy was an artist, and she’d long ago grown accustomed to partial and full nudity. She didn’t work full-time in the movie industry, but she’d had sufficient experience, thanks to Seth. Gorgeous models and want-to-be actors were the norm in Hollywood, as commonly found as a cornstalk on a July day in Indiana.

She whipped off her hoodie and tossed it on the table.

“Yes. I’m Joy.” She nodded to a spot in front of the table and reached for a chair, all brisk business.

She met his stare and was once again snared.

“We better get started or you’ll miss the shoot,” she murmured, discomfited for some reason by the idea of Seth sharing even the smallest details of her life with this stranger.

He walked to the spot she’d indicated. Joy sat and rolled her chair directly in front of him, her face situated in front of his abdomen.

Without another word, she picked up a tattoo marker and began to outline the design in Seth’s illustration on her human canvas. Seth had altered the tattoo art somewhat from his original proposal. The brilliant starburst through rippling water was bolder and much more intricate than his original design. Joy liked the change.

She never looked at his face once while she worked, but she was highly aware of him. Her knuckles brushed occasionally against warm, dense flesh. Her nose was just inches from his body. The alcohol base from the body paint filtered into her nose. Beneath it, she smelled the musk of his skin like a subtle, living thread twining through the chemical artifice. The fragrance was potent somehow, sending a loud, clear message of male virility to some ancient part of her brain.

Only a stretchy, seaweed-like boxer-brief costume covered his genitals. Joy couldn’t help but be conscious of the fact that her chin was mere inches from the fullness behind the flimsy material. She worked steadily, but a dull, pleasurable ache began to grow at her core.

A light glaze of perspiration had dampened her brow and upper lip by the time she leaned back. She glanced up at him, a calm—entirely fake—expression plastered on her face.

“You’ll have to lower your briefs enough for me to make the transition look natural,” she said.

The air conditioner made a loud, chugging sound and then resumed its typical hum. She saw his throat convulse. Was he as uncomfortable with this situation as she was? He held her stare with those striking eyes and moved his hands, folding down the seaweed brief and exposing the stretch of skin just above his genitals.

She lifted her tattoo pen and paused.

Seth had used the airbrush below the brief, but not in a thorough manner. Joy could see several patches of naked, golden skin along with a smattering of light brown hair. Pubic hair was usually several shades darker than hair on the head, which meant he must be blond beneath the beautiful headpiece affixed to his head.

Below that strip of skin, the flimsy material barely contained a virile package. The vision was nearly as striking as that of the man’s eyes peering through the elaborate mask. What was it about that stretch of skin below the belly and just above a man’s cock that spoke of sensitivity . . . vulnerability?

His arm muscles clenched tight. He kept his hands on the material of the briefs, as if he wanted to be prepared to jerk the garment back into place at the slightest provocation. Joy didn’t know whether to feel compassion for him or annoyance. He was the six foot-four-inch tower of brawn here, not her. She was hardly going to attack him. She disliked this intimate aspect of her work, but the human body wasn’t something that could be ignored when it came to art. He was just a backdrop, not any different from the canvases in her studio.

Her expression hardened at the thought. She leaned forward and continued her design, the tip of her marker slipping across firm flesh. She was doing fine for the next minute or so until she noticed the brief was stretching and expanding to contain his erection. His cock rode along his left thigh. The column of it was clearly delineated beneath the insubstantial garment.

She glanced up at him anxiously. He was looking down at her. She’d known he would be. She’d sensed his stare on the crown of her head the entire time. He closed his eyes briefly. She sensed his regret even through his half mask.

Heat flooded her cheeks and she looked away.

It wasn’t uncommon for a model to occasionally experience an unwanted erection during a makeup application, but the evidence had never been so . . . close to her before. Nor had it ever been so appealing. For a few dreadful seconds, she felt like she couldn’t expand her lungs. They finally released, however, and she reached for a pot of paint.

“Do you want to take a quick break?” she asked, striving to keep her voice even.

“No. Go ahead.” His voice sounded so strained, she glanced up at him in concern. She saw the rigidness of his angular jaw. His eyes blazed through the prosthetic mask.

Exposed to You, Available November 6 from Berkley Heat

Beth is offering up a copy of EXPOSED TO YOU to one commenter, either a print or ebook copy, winner’s choice. If you choose ebook, it must be a vendor that offers gifting, like Amazon, B&N, Itunes. Contest open to international entries, but for the print copy only.

To be entered to win, post a comment about body art in any form. Tattoos, piercings, whatever. Do you like it, dislike it, do you like tats on guys? Do you have your own body art, wish you did? If so, what would you get? Winner chosen on Wednesday.

Must be a minimum of 18 years old to enter