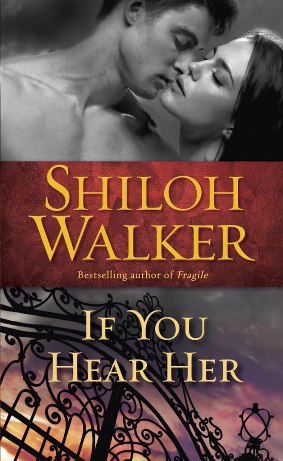 Lena rubbed her hands together. Her head cocked, her gleaming red hair sweeping down to brush against her shoulders. “I’m curious, myself. Just why are you so curious, Ezra King? Why in the hell do you care if I heard screams or not? This is a little out of your…what’s the word…jurisdiction. And you’re on leave.”

“Doesn’t matter if I’m on leave or not.” Ezra sighed and rolled his shoulders. It didn’t matter. Just like it didn’t matter if this was out of his jurisdiction. He saw a puzzle and he was going to get to the root of it. That was just how he worked. “I’m a cop. It’s just how I am, Lena. Besides…”

He snapped his mouth shut before he could finish that thought. He wasn’t quite sure he wanted to go there just yet.

She lifted a brow.

Blood rushed up, staining his cheeks red. Shit. Hunching his shoulders, he turned away, even though it didn’t do a damn bit of good. She couldn’t see him anyway—didn’t keep her from sensing how uncomfortable he was, he had a feeling. And Reilly, damn it, he’d already seen it, and would probably have a laugh or two about it later.

“Besides, what?” Lena persisted.

“This is a small town,” he said, hedging. He could talk his way around it. He didn’t need to get into discussing the fact that he’d already gone and developed a personal concern for her. Even as a friend, he was allowed to have a personal concern, right?

She already mattered to him. But he didn’t need to get into that.

No, no reason at all to go into that. “You know how small towns are. The minute you mentioned this to anybody, then everybody knew about it.”

He turned back, watched her face. From the corner of his eye, he also watched Reilly’s face. But he’d already figured it out, Ezra realized.

“If somebody was out there, hurting a woman, Lena, then you heard it. That makes you a witness…of sorts. Makes you a liability. And now the whole damn town knows about it. If whoever did it lives here, then he knows about you.”

She was naturally pale, the clear ivory complexion of a natural redhead and it didn’t seem possible that she could get any paler.

Obviously, he was wrong.

He’d seen corpses with more color than her and for about five seconds, he had to wonder if she was going to pass out. Through the tinted lenses of her glasses, he could just barely make out the shape of her eyes, could see the way her lashes fluttered, then lowered as she closed her eyes. She took a deep, steadying.

“You hadn’t thought quite that far ahead,” Ezra said.

With a raw, humorless, laugh, Lena said, “You could say that.”

Read more about If You Hear Her and The Ash series

Enter the Thrills & Chills giveaway…throughout the end of October and early November, Jaci, Shiloh & Lisa will be visiting each other’s blogs, leaving excerpts & guest blogs. On those days, all you have to do is comment on the T & C guest blog or T & C guest excerpt (comment as often as you like, but you only get one entry per post). When the Thrills & Chills blog tour is over, one lucky commenter will win a Nook Color!