So last night Biker Dude and I headed out to get some fast food. He’d had an after work meeting that ended late, and I was starving. Fast food worked for me (once the blood sugar hits low, I need to be fed and fed NOW).

McDonald’s is the halfway point between where we live (pretty much middle of nowhere) and town. Which meant we’d now have to drive into town to get food. Color me near fainting by now, but I figure I’d just deal. We pulled into the Carl’s Jr drive-thru and ordered our food. While waiting, three Budweiser semi’s pulled onto the main highway. No, not beer trucks. Three Budweiser Clydesdale semi’s.

Now we live in a pretty small town. If the Clydesdales are going to make an appearance in our town, we’re going to know about it. Biker Dude and I discussed this while waiting for our food and decided they had to be going to the expo center, so he decided I could eat my burger in the car.

I grew up in St Louis, home of Anheuser Busch, home of the Budweiser Clydesdales. I’m a big fan because they’re beautiful horses, and I wanted to know where those semis were headed, so I was game. We drove to the expo center, and pulled into the back parking lot, where sure enough they were unloading the Clydesdales into the barn.

Interesting, since the only thing going on was a Dressage tournament this coming weekend. Not a big enough event to draw the Clydesdales. So we got out of the car and headed into the barn to see what was going on. They had corralled the horses and were feeding and watering them, so we wandered and took pictures and talked to their handlers. Yay!

Turns out they were in Peoria, IL today, headed toward Minnesota when they got the call to be part of the parade to celebrate the Dallas, Mavericks NBA championship win, so our small town was their layover point for last night. Go Mavs! And we couldn’t be happier to see the Clydesdales.

Oh, and we got these (aren’t they beautiful?) 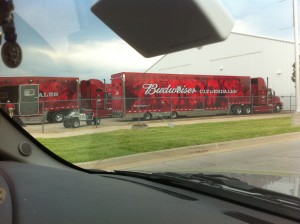 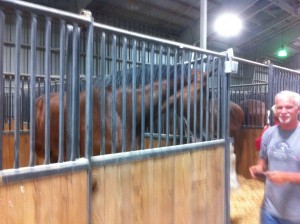 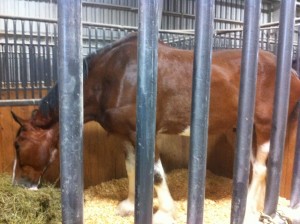 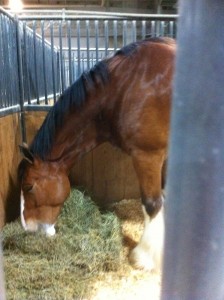 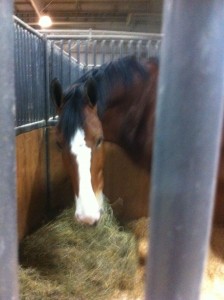 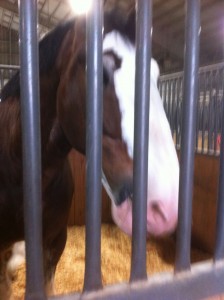 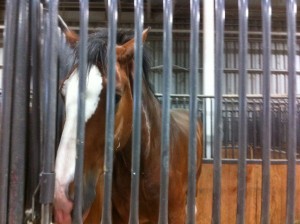