My friend, awesomely talented author Shayla Black, has a new book that released this week. Check it out! 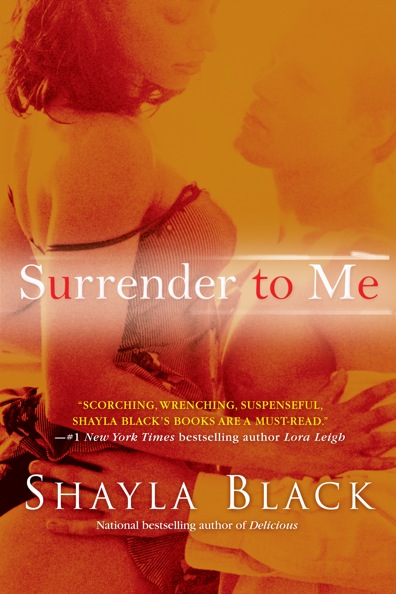 Hunter had everything until a bullet put his career as a Navy SEAL on hold. Restless and in need of distraction, he accepts an intriguing proposition. Restless and uncertain about his future, he accepts an intriguing proposition: share an acquaintance’s girlfriend and fulfill her fantasy of a ménage. It should have been just a night of sexual adventure between three consenting adults. But Kata is like no other girl Hunter has ever met. By turns audacious and sexy, then vulnerable and aloof, she’s a heartbreaker he’s determined to master. But he needs more than one night. And he wants to do it alone.

Kata never expected to leave her comfortable relationship and explore something so dangerously forbidden with a stranger. Hard as she tries to resist, the guilty pleasure overwhelms her, and she surrenders herself, inch by inch, to the hardcore man who wants her for himself. Consumed by blazing desire, they’re soon threatened by the shadows of the past. And now to keep Kata safe, Hunter makes her a bold proposition of his own. Saying yes will destroy her heart. But saying no could cost Kata her life.

Excerpt after the jump:

Rubbing damp palms on his denim-clad thighs, Hunter stood in front of the bathroom door Kata had retreated to and let out a deep breath. It didn’t help; every muscle remained clenched. If there was another fucking way . . . But there wasn’t, and he knew it. This was it.

His heart pounded as he pushed into the room. The fragrant, humid air wrapped around him. Everything smelled like her: spicy amber, sweet lilies. Beyond arousing. Like always, he turned hard and aching in an instant.

God, he loved this woman.

Seeing him, she gasped and scrambled for her towel on the basin. He grabbed the damp terry cloth first, loving the hell out of her in nothing but a lacy, baby blue thong. Her smooth olive skin and lush breasts with those tight, rosy brown nipples tempted him like nothing ever had. The dark ropes of her wet hair dripped down her back, framing her freshly scrubbed face. He couldn’t wait to get back inside her, hold her again. Yesterday, she’d been dealing with too much, so he’d backed off, hadn’t pressed his way into the snug, silken clasp of her pussy.

Tonight, all bets were off.

Realizing that he wasn’t going to give her the towel and that he blocked the path to her clothes, Kata faced him squarely, chin raised. “What now? I’ve told you how I feel and what needs to happen. If you’re here to stop me from leaving, you can’t.”

Ah, that stubborn streak of hers that intrigued him so much. Normally, he’d argue until he wore Kata down or seduce her until she gave in with a well-sated cry. This situation was far from normal. Until dawn, his most important role was to keep her safe. Nothing mattered more. Hunter had only one way left to do that . . . and give her what she wanted.

It was going to tear his fucking heart out.

He had no illusions; he’d never be the same. He’d be every inch the miserable bastard his father had been for the last fifteen lonely years, that Logan was now. Hunter had always sworn he’d do whatever it took to hang onto the one woman meant for him.

Goddamn it, in a handful of hours he’d have no choice but to let her go.

Hunter crossed his arms over his chest, restraining the urge to embrace Kata, stroke her tempting flesh—and never stop. “First, if you go home, you’re not only putting yourself in danger, but your family, too. You might not know everything about this asshole threatening you, but he knows you. Why wouldn’t he come after those you love?”

Kata’s stubborn chin rose, but she nodded. Though she didn’t want to, she saw his point. Now he had to put all his cards on the table, even though he had the losing hand.

“I have a proposition, honey: Today, I’ll do whatever it takes to neutralize the threat against you. Tomorrow, you’ll be free in every way.” He clenched his fists. “I’ll sign the fucking divorce papers.”

As soon as he choked out the words, Hunter wished he could take them back. For him, she was it—had been since the moment he laid eyes on her. He wished he could make her understand, but unless she came to love him in return, accept his needs and her own, they were doomed.

Surprise flashed across her face, along with something else—regret, maybe . . . or was that his own wishful thinking?

She smoothed out her expression. “T-thank you for finally being reasonable.”

Reasonable? In five seconds, she wouldn’t think so. “I’ll do that, if you spend tonight with me.”