Is anyone a Jeopardy fan out there?

Biker Dude and I love Jeopardy. We love to watch the show and attempt to answer as many of the questions as possible in order to see how smart we are. We figure if they held 5th grade Jeopardy, we’d do all right. Then again, we don’t do very well on Are You Smarter Than A Fifth Grader, either, so maybe not.

Anyway, this week for three days they’re doing Jeopardy vs Watson, where two of Jeopardy’s smartest and highest money winning contestants are going against Watson, an IBM computer who has been taught to answer Jeopardy style questions.

Yesterday’s show, the first day of the competition, was fairly interesting. It’s a little artificial intelligence, some baby steps for technology, a bit of man vs machine, and a little trepidation on my part: 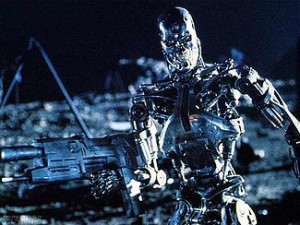