So last night and this morning we got hit with another 10″ of snow.

When it was time for the dogs to go out, the snow was blowing sideways, north winds were howling, and the dogs were having none of it.

No going outside, no breakfast. That’s the rule.

We waited. And waited. There’s 30″ of snow on the ground by now and it’s really damn cold outside. Can’t say as I blame them.
Now we live on an acre and a half, so it’s kind of a far trek out to the trees. Someone was going to have to make the path in those 30″ of snow. 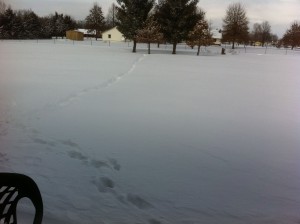 But who was going to be first?

Was it these three dogs? Our three largest dogs? 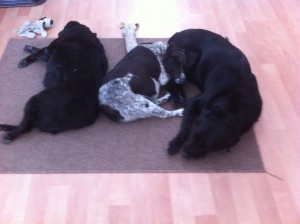 How about this one?

Weiner (Not his real name, either) 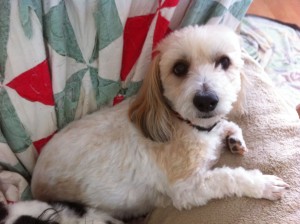 Finally, one brave dog ventured out to dig the path in the snow.

It was this one, Bee, the smallest dog in the house. 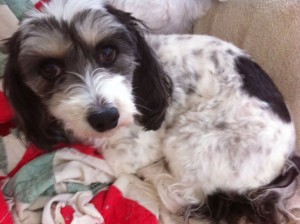 The one who weighs 9 lbs, whose belly is 4″ off the ground. She’s the one who blazed the trail for the Wuss, the Pansy, the Sissy and the Weiner. After she went out and hopped through the 30″ of snow and made a path, they dragged their chicken butts outside.

They should be ashamed. And she’s a rockstar.

She’s been smirking at them all day today.