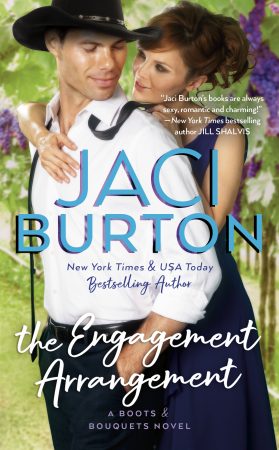 What do you do when you catch feelings for your fake fiancé? From New York Times bestselling author Jaci Burton comes an accidentally-in-love romance sure to warm your heart.

Brenna Bellini will never get married again. She plans to live out her days as a happy, successful, single woman. When she’s chosen to be a bridesmaid in her friend’s wedding at the Bellini family vineyard, she’s thrilled. That is, until she realizes who else is in the wedding party. Brenna’s going to have to spend four days in the company of not only her ex-husband, but also her high school nemesis. She just knows the fact that she’s single and alone is going to be rubbed in her face all weekend long. Well, not if Brenna can help it. She’s going to find herself a fake fiancé.

Finn Nolan is thrilled to be offered the job. He’s had it bad for Brenna ever since he came over from Ireland to work at the Bellini family vineyard. After falling for Brenna from afar for years, this Irish cowboy is determined to show the woman of his dreams that he is her Mr. Right.

So what does a confirmed never-getting-married-again woman do when the man of her dreams unexpectedly lands right in front of her? Because for the first time, she might not be able to walk away. This time it might be forever.

The Engagement Arrangement: Book 2 in the Boots and Bouquets Series

An Irishman never left a glass of whiskey unfinished, and Finn Nolan was as Irish as the green hills of his former homeland. He propped his booted feet up on the Bellinis’ front porch railing to finish off the last of his whiskey before heading back to his own house for the night. He rolled the amber liquid around in his glass, then frowned as he saw headlights cutting into the darkness in front of him.

It was late. His boss, Johnny Bellini, had gone inside for the night. As far as he knew, everyone in the house had already gone to bed. Normally Finn would have headed to his place on the Bellini property, but Johnny had wanted to chat and Finn enjoyed his company so he’d hung out long past dark.

The car pulled down the long gravel drive. He decided he’d wait and see if maybe someone had made a wrong turn. The lights were off on the front porch so they couldn’t see him as they stopped in front of the house.

Recognition dawned as he saw Brenna Bellini open the passenger door of the Mercedes, followed by some tall, professionally dressed dude exiting the vehicle’s driver’s side.

The guy walked around the car and Brenna held up her hand.

“At least let me walk you to the door.”

“Don’t bother. It’s clear this date is over.”

“Why? Because I asked you to come home with me?”

“No. Because you’re a class A, narcissistic asshole whose primary interest is in yourself. Go get in your car and take yourself home, Jerry. I’m sure you and your hand will have a lovely finish to the night together.”

Jerry looked offended. “Hey. I can get a lot of women.”

“Then go get them. A whole harem of them.” When he continued to stand there, she shooed him with both hands. “Go.”

Jerry lifted his chin, muttered something Finn couldn’t hear and got in his car. Brenna waited, arms crossed, while he drove away.

Finn smirked. The one thing he knew about Brenna Bellini was that she could take care of herself.

“What a dick,” she muttered as made her way up the stairs, stopping when she caught sight of him.

“How long have you been out here?”

“The whole time.” He pulled his feet from the porch railing and stood. “Why do you keep going out with such losers?”

She shot him a glare. “What do you know about my dating history?”

He shrugged. “Here and there.”

She rolled her eyes and started toward the front door.

She looked over at him. “Damn right I do.”

He walked over, stopping in front of her. Damn she smelled good, like a vanilla cookie he wanted to taste. And kiss. Her gorgeous red hair streamed out behind her in the breeze, and he itched to run his fingers through it, to see if it felt as soft as it looked. But he’d never once touched Brenna Bellini.

Except in his fantasies.

“Then why don’t you give a good guy a chance?”

She looked him up and down. “What? You think you’re the right guy for me?”

“Why not? I’m a better guy than those jackasses you keep going out with. Stop playing with those boys you’re not interested in and let a real man into your life.”

She shook her head. “Not a chance in hell, Finn. First, you work for the Bellinis, and second . . .”

His lips curved as she trailed off, unable to finish the sentence.

“Nah. I’m not your family and you know it. I’m the man you’ve always wanted, always needed, but never knew it. Until just now.”

He saw her breath catch, her eyes widen, her lips part. He knew if he pulled her into his arms and kissed her, she wouldn’t object. But the one thing Brenna needed was a slow-burn romance, and he intended to give it to her. She deserved that.

He tipped his cowboy hat toward her. “Good night, Brenna.”

He turned and walked down the steps and around the side of the house, enjoying the quiet of late night, the glow of fireflies dancing around him. He’d lived on the Bellini property since he was eighteen years old, after his ma died and, since he had no other living relatives, Ma’s childhood best friend Maureen Bellini had flown him from Ireland to come live with them. After that, Johnny and Maureen Bellini had become family to him. Brenna’s sisters Erin and Honor had become like sisters.

But Brenna? She’d never been family. She’d been something else entirely. The first time he’d laid eyes on Brenna, with her beautiful red hair and unusual hazel eyes and hellacious temper, she’d lit a fire in him that over a decade later had yet to be extinguished.

Not that she’d ever known that. He’d never wanted her to know. Until now.

At first, he’d been too young, too unsure of himself, too tongue-tied around the fierce beauty. And then they’d both grown up and he’d watched her fall in love with and marry that shithole Mitchell Walker. Mitch had never appreciated the fine woman he’d had. He’d taken her for granted, ignored her in favor of his business, and then he’d lost her.

She’d needed time to grieve the end of her marriage, to get back on her feet, to regain her confidence. She’d gotten back out there and started dating again, but she found fault with every one of the guys she dated.

As he turned the corner and headed down the path toward his place, he smiled. He knew why none of those guys had lit a spark under Brenna. Because none of those men knew her like he did, knew what she needed.

He was the flame to her tinder, and it was time he lit the match.

Brenna tossed her purse onto her bed and stared at the full-length mirror leaning against the wall. Her face was flushed with a pink glow, her pulse still racing after that comment from Finn.

What the hell had that been about? He was the one she always wanted but never realized, or some such nonsense? Where had that come from? After her useless date tonight, she’d felt empty and disappointed. But a few words from Finn on the front porch and she was lit up like a bonfire.

Liar, liar, because your panties are on fire.

“Shut up,” she whispered to herself. She took off her dress and hung it up, went into the bathroom to wash off the remnants of her terrible date, then climbed into bed to read a book. But she couldn’t concentrate, Finn’s words still pinging around in her head.

Was he the guy she’d always wanted, always needed, but had never realized it?

Stop playing with those boys you’re not interested in and let a real man into your life.

She pulled her legs in toward her chest and wrapped her arms around them, thinking about how he’d looked when she’d walked up the steps. His long, jean-clad legs stretched out, his cowboy hat tipped low across his brow, hiding his magnificent stormy gray eyes. And that Irish lilt to his voice—that alone could melt a woman’s clothes right off her. He needed a haircut, all that rich silky black hair spilling out from underneath his hat, making her itch to run her fingers through it while his mouth crashed down on hers and his tongue—

Okay, maybe she had an attraction. And maybe she always had. She still remembered when he’d first arrived on the ranch. He’d been eighteen then, and she’d been seventeen. He’d been lanky and shy and oh so heartbroken about his mother’s death that her heart had just about broken with him. But he had a smile that lit up the entire state of Oklahoma.

Oh, she’d fought that attraction with everything in her. After all, Mom had trusted all of them to take care of Finn, to treat him like family. And when he’d loosened up and become part of the family, she’d held that attraction she’d felt to herself, while Finn had come out of his shell and laughed and made friends and had girlfriends and treated her just like he treated everyone else.

Then Mitchell had come along, distracting her with his sweet talking and empty promises of happily-ever-after.

What an eye opener that had been. Happily-ever-after was for fairy tales. That was why she worked the winery and left the wedding stuff to her sisters.

She rolled her eyes, realizing that thoughts of Mitchell were like buckets of cold water all over her libido, dousing her hot fantasies of Finn.

With a sigh of disgust, she turned out the light and climbed under the cool covers.

She and Finn weren’t meant to be, anyway. He worked on the vineyard, they saw each other every day and the two of them fooling around would be a recipe for disaster.

It was never going to happen.