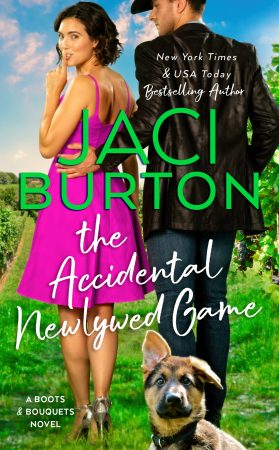 What happens in Vegas doesn’t stay in Vegas, when one night out turns into a wedding that neither newlywed can remember, from New York Times bestselling author Jaci Burton.

Wedding planner Honor Bellini is in Las Vegas for a work convention when she runs into her sister’s ex-fiancé, Owen Stone, who’s also in town for his craft brewery business. They’re both glad to see a familiar face from home…until a night of drinking leads to waking up in bed together—and a marriage certificate from a wedding that neither of them can recall.

Horrified, Owen suggests an immediate annulment. Honor agrees, but when they spend the day together, their chemistry is overwhelming. Plus, Honor has a flash of memory of their steamy wedding night, and she definitely likes what she remembers. They decide to wait before cancelling the whole marriage thing, though they both head back to Oklahoma determined not to tell anyone at home what happened in Vegas.

The problem is, Honor and Owen can’t seem to stay away from each other—or keep their hands off one another. The longer they keep their secret, the harder it gets to deny how they really feel. Even worse, this huge secret has the potential to hurt someone they both care about. They need to get an annulment before this accidental marriage turns into love.

The Accidental Newlywed Game: Book 3 in the Boots and Bouquets Series

After eight hours of workshops and networking and smiling—dear God, so much smiling—Honor Bellini desperately needed a stiff drink.

The conference for wedding planners had been amazing. She’d learned a lot and had met great people from all over the country. But she’d talked so much her throat was raw, she had taken so many notes her fingers were cramped and her brain was oh-so-tired from being filled with information. All she wanted was a double margarita, some dinner and then bed.

The bright lights and jingling bells of the casino beckoned as she walked through the lobby of the Bellagio, but she resisted easily. She loved a lot of things about visiting Las Vegas. Gambling wasn’t one of them. There were plenty of casinos back home in Oklahoma, so gaming had no lure for her here. But the shows and the shopping? Totally different experience, and she’d spent much of her free time the past three days soaking up the sights, taking in some shows and browsing through stores, even if she had done it alone. Not that it had bothered her to go by herself. She was, after all, pretty great company.

After putting her work stuff in her room, she tucked her hotel key card in her purse and went downstairs, heading toward the bar lounge in the lobby. It was surprisingly quiet and uncrowded, and a pianist was playing soft music. She found a seat and a server came over right away. She ordered a Cadillac margarita, then relaxed against the oh-so-comfy cushioned chair and people-watched, as both tourists on vacation and people dressed for business walked by.

Vegas was a busy place that catered to both the party people and the business types. Everyone could have fun here, even if you had to slip in your fun on a work trip, like Honor was doing.

The server brought her cocktail. She thanked him and took a sip. It was delicious and very strong, exactly what she needed. If she could kick off her heels this would be perfect, but she’d settle for an excellent marg for now.

Her attention was drawn to a guy standing at the registration desk right outside the bar. Even though she could only see his back, she easily recognized his dark hair and the way he walked. Plus, she would know that fantastic butt anywhere, even though he was totally off-limits—first, because he was her sister’s ex-fiancé, and second, because, well, see number one.

She pulled her phone out and sent a text to Owen Stone, just in case she was wrong.

Where are you right now?

The guy at the front desk pulled his phone out of his jeans pocket and typed.

Her lips curved as she typed a reply.

I’m in the bar across the lobby. Turn around.

He pivoted and she waved. She caught his thousand-watt smile as he waved back, struck by the flash of heat she felt.

Okay, that was probably the tequila hitting her. It couldn’t be because she had just seen Owen. They’d practically grown up together. He had once planned on marrying her sister. The wedding hadn’t happened, of course, but that was beside the point.

And, sure, Owen was hot. So very hot. And, sure, hadn’t she always had a thing for him, even before he’d dated her sister Erin? Who wouldn’t, with his good looks and incredible body? But once Erin had decided to date him, Honor had stepped back and marked Owen off her list forever.

Well, what was he, exactly? He looked amazing since finishing up his cancer treatments last year. He’d gained his weight back—and a lot of muscle, too. He looked healthier than ever. And hot.

Had she already thought about how hot he looked? How his polo shirt fit snugly against his broad chest? How his jeans looked so incredible on his hips? And had he somehow gotten taller? No, that couldn’t be right. And that hair. She had a thing for dark, slightly tousled hair that was just made for a woman to run her fingers through.

Oh, my, God, Honor. Calm yourself before you ooze right off the chair.

He finished up at the front desk and walked over while Honor sipped her drink and watched him, happy to see someone from home while she was so far away from it.

That’s what it was. She was happy to see someone from home. She wasn’t at all ogling all his hotness or anything.

She stood and they hugged.

But did he have to smell so good?

He sank into the chair next to hers. “This is a surprise. I can’t believe you’re here.”

“I can’t believe you’re here. Are you staying at the Bellagio?”

He nodded. “I’ve been around all week, actually.”

“Me, too. How have we not run into each other?”

He shrugged. “No clue. What are you here for?”

“A conference for wedding planners. I just finished up today.”

“It was awesome. I learned a lot. I not only picked up amazing tips from the speakers but also from my fellow wedding planners. My head is spinning with new ideas.”

The server came over and took Owen’s drink order, then disappeared.

He stretched out his long legs. She absolutely would not stare at the way his jeans fit so nicely tight against his thighs.

“Craft brewers conference,” he said. “Kind of the same thing as you, only with beer.”

She laughed. “And was yours good?”

“Yeah, it was great. I picked up new ideas for brewing quality and maximizing efficiency, and learned a ton of new governmental rules that gave me a headache, and some tips on growing my business.”

Their server brought Owen his beer. He immediately took a long swallow.

“When do you leave?” he asked her.

“Not until Sunday. I wanted some downtime while I had the chance.”

“Yeah, it’s not like you take a lot of time off, with weddings happening every weekend at the vineyard.”

“The family’s holding down the fort for you this weekend?”

“Yes. And I hired an assistant to handle things for me.”

He cocked a brow. “You hired an assistant? You let someone else take the reins?”

“Funny. Erin and Brenna are there to manage everything. Besides, Mae can handle it.”

Owen looked at her. “You hired Mae Wallace? The one who’s been a bridesmaid in all those weddings? And was almost a bride herself?”

She nodded. “She knows as much about weddings, planning weddings and being in weddings as I do. Probably more than I do.”

“And about how to cancel a wedding.”

“Which wasn’t her fault.”

“No, it wasn’t. At least you won’t ever have to host a wedding for the asshole that cheated on her.”

“Not at Bellini Weddings, we won’t. He will never be welcome on our property.”

She lifted her glass. “I’ll drink to that.”

He tipped his glass to hers. After she took a couple long swallows, he asked, “What are you having?”

“Strong stuff. Though if you’re gonna drink that you might as well do shots. End of the week and all, celebrate big.”

She laughed. “Oh, sure. While you’re having beer.”

“Hey, I meant we could do shots. It’s been a long week and my head is filled with government regs and beer formulas.”

“My brain is on overload, too. Which is why I ordered a double.”

He signaled for their server and ordered them both shots of some top-shelf tequila. Their server brought the shot glasses over with a smile, then left.

She looked at the golden liquid, then over at Owen. “I’m not sure it’s such a good idea to do shots on an empty stomach.”

Owen shrugged. “One shot. Then we’ll go get something to eat.”

She had planned on eating alone, then going up to her room.

Instead, she was going to have dinner with Owen. Hot Owen.

No. Friend Owen. That was all.

It was going to be fun.