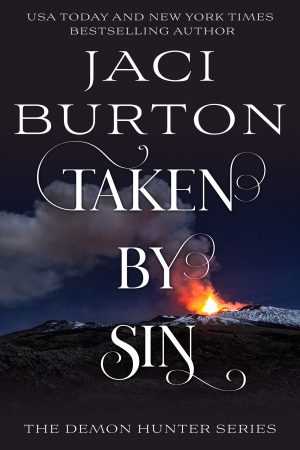 Temptation. Sin. Seduction. He’s taking her all the way…

He’s the sexy demon hunger who just saved her life. Now she’s about to show him what salvation’s really about.

Dalton has taken on an impossible mission, one that could cost him both his career and his life. But Isabelle needs his help, and he’ll do anything to keep her safe. Still, hiding her out is one thing. Banishing the demon inside of her is another, especially when the vulnerable, hot as hell woman brings out the devilish side of him.

Isabelle feels the passion seething inside of Dalton and craves it. But she still isn’t sure whether Dalton is her enemy or savior. All she knows is that every time she looks at him she wants him—all of him, the consequences be damned.

But both demons and demon hunters want Isabelle dead, and that means they’re in big trouble. And as their pursuers close in, Dalton has to make a choice—will he sacrifice the woman he loves, or make the ultimate sacrifice in the name of love?