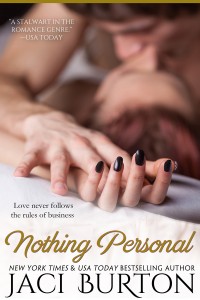 NOTHING PERSONAL is a previous release that has been reissued with a new cover and a lower price. There is no new content in this book, so if you’ve previously purchased it, no reason to do so again. But if you haven’t read it yet, I hope you’ll give it a try. It’s one of my favorite stories. 🙂

It’s currently available at the following locations. More links will be available shortly and I’ll let you know as soon as the book is available for purchase at other outlets.