The amazing Vivian Arend is guesting on the blog today, showcasing her upcoming book, HIGH SEDUCTION, part of her Adrenaline Search and Rescue series. And there’s also a giveaway, so read on about this great series! ~ Jaci 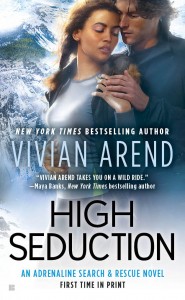 LIFELINE: an elite search-and-rescue squad based out of Banff, Alberta. Specializing in high-risk rescue missions,
this team goes wherever the job takes them…

As the chopper pilot for the elite Lifeline search-and-rescue team, Erin Tate is used to handling power. Calling the shots in the air is one thing—in the bedroom it leaves her cold. What she wants is a man strong enough to strip away her control.

Paramedic Timothy Dextor has a wild card reputation, and the dark appetites to prove it. The only thing missing is a woman he can share them with. Landing a position on the Lifeline squad puts his old flame back within reach. He already knows what Erin needs, and this time he’s not letting her go.

But when an emergency throws Erin and Timothy together in unanticipated ways, the stakes are raised—on the job and off. Now they’ll both discover the real meaning of control…and the risks that come from falling in love.

You can read more about High Seduction at Vivian’s website here
Excerpt:
…….

It might be too soon, but part of having grown up meant Tim was not going to lie, not even by omission. “That as well, but I’m really here for you. I want you back, Erin, and I’m willing to work for it.”

Between them the water rippled as a family swam past, the small waves cresting over her skin and his where they lay side by side. A minor tremor, miles apart from the tsunami of passion that could flood over them soon if he had his way.

Erin lifted her gaze to meet his. Stared silently for a good sixty seconds. Nothing but the gurgle of the pool gutters and low voices.

She rolled toward him, increasing the contact points between them. His arm rested between her breasts, her knee slightly over his thigh, and he tensed. She was solid muscle and soft skin. A combination of strength and feminine beauty that he could hardly wait to experience all over again.

She trickled her fingers over his chest and he held his breath, fascinated by this new side of her. Bolder, more determined. He loved it, and wondered how long she’d hold that stance.

Erin tilted her head as she dribbled water over his skin. “I could work with you. You are talented, and the team could use you.”

“I have talents in other areas as well,” he teased.

“So do Devon and Alisha, but I don’t sleep with them.”

“Touché.” He crossed his arms under his head, tightening his abdomen as she continued to drive him mad. “So you won’t sleep with me. I can handle that. Until you ask.”

She snapped her fingertips against his stomach, the tiny blow stinging on the wet, bare skin. “You’re such an ass.”

Vivian’s generously offering an ARC giveaway of HIGH SEDUCTION, so comment here for a chance to win. I’ll draw a winner on Thursday. Open to international entries. Must be 18 years of age or older to enter. Void where prohibited. You know the drill.