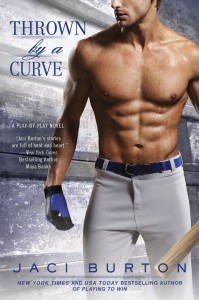 THROWN BY A CURVE is finally released! I hope you all enjoy Book 5 of the Play by Play series!

Right now, the only demand he’s making on Alicia is that she get him ready to pitch in time for opening day. Except the sexual chemistry between them is so charged, Alicia’s tempted to oblige Garrett just about anything.  But both their careers are at stake—one bad move and it’s game over for both of them.

You can read an excerpt here

THROWN BY A CURVE is available at the following locations, or at your favorite bookstore