Thanks to everyone who entered the ARC Contest, and thanks to Vivian for offering up the ARC and guesting here on the site.

The winner was chosen randomly, and it’s

THE CONTEST IS NOW CLOSED.

I’m so thrilled to have Vivian Arend guesting on the blog today. I had an opportunity to get an advance read of HIGH RISK, and it is awesome. Vivian is offering up an ARC of HIGH RISK today, so check out her post below, then enter for a chance to win. Thanks, Vivian!

My writing career began in paranormal romance, slid sideways a little to include contemporary, and now? I’m very excited to be branching out into something new again. My upcoming release is a Berkley Sensation—and while it’s labeled Romantic Suspense, I like to call it High Adventure.

Take a peek at HIGH RISK, the first book in the Adrenaline series, coming March 5. 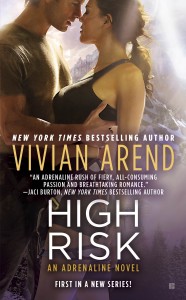 LIFELINE: an elite search-and-rescue squad based out of Banff, Alberta. Specializing in high-risk rescue missions, this team goes wherever the job takes them…

Rebecca James was once revered for her devil-may-care attitude and backcountry survival skills. But ever since she lost her partner in a fatal accident, patches of her memory have been missing. And until she can recall those final, tragic moments before the accident, she can’t move on.

Since Marcus Landers was permanently injured during a mission, all his energies have been focused on his Lifeline team. When Becki—whom he had an intense affair with seven years ago—arrives in Banff, he’s inspired to reignite the spark they once had. Their mutual ardor slowly awakens Becki’s dormant, haunting memories.

New truths surface until Becki must at last confront her greatest fear. Remembering the past might mean a future without the man she loves…

Enjoy an excerpt from HIGH RISK:

Becki moved smoothly across the floor, body-hugging workout gear covering her, thin-soled climbing shoes on her feet. Marcus wondered if she was thinking about the previous climb, worried how her mind might respond to the challenge today, but her restraint was incredible. He could have asked her to join him for a cup of tea, she was so controlled as she paced to the equipment cubicles and pulled out her harness, then buckled and tightened without a word before turning to face him.

Naked, in my bed shouldn’t have been the first thought in his brain. “Pitch three. Nice and easy. You’re going to use only the red route. We’ll see if having a focus will distract you enough to finish the climb with no troubles.”

Becki snorted. “You don’t think much of my skills if you think sticking to the red holds is enough to sidetrack me.”

He remained quiet as they both roped up. She lifted her chin to examine the route, and he saw it. A shiver as she reached to grasp the wall.

Shivered, but still went forward. Marcus admired her a whole hell of a lot in that moment.

He held out the fabric he’d brought with him, and a crease appeared between her brows. “What’s that? A flag to wave when I’ve had enough?”

“I’ll be your eyes. You have to trust me. And you’ll have to concentrate, because once I tell you where a hold is? I’m not telling you again. You have to keep the location and shape in mind for when you’ll need it for your feet.”

“You expect me to climb blind?” She wiggled the cloth. “You’re insane.”

“You’re just mad you didn’t think of it first.”

A snort of amusement escaped her. She glanced at him, and for the first time real fear showed in her eyes. “Marcus, what if . . .”

He shook his head. “No. Don’t question. Yourself, or me. Do it. Put on the blindfold, Becki, and put yourself into my hands.”

Her tongue snuck out for a second, and he fought the urge to go catch her against him and slip his own tongue along her lips. To taste her. To take. The headache that had haunted him over the past days was gone, replaced with lust like he’d not experienced in a long time.

He’d never had a cure like her around before.

Becki lifted her hands and pressed the dark material over her face, knotting the fabric behind her head. “I’m not going to ask where you found the blindfold.”

He ignored the temptation to list the other toys he planned to use on her someday. “Turn, right shoulder back.”

She straightened and took a deep breath, her chest moving too rapidly. “Marcus . . . I—”

“My voice. Listen to it. Nothing else. I’m your anchor, and I won’t let anything happen to you. Do you trust me?”

“Right shoulder back,” he repeated.

Comment below for a chance to win a ARC of HIGH RISK. Contest closes: Thursday

Must be 18 years of age or older to enter