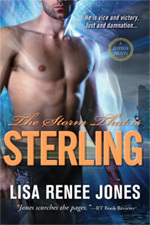 THE STORM THAT IS STERLING
by LISA RENEE JONES

I love romantic suspense. In fact, it was a romantic suspense novel that landed me my first agent. That book didn’t sell, but an editor told my agent she thought I should be writing in the paranormal genre. Since then, I’ve delved into paranormal pretty heavily, but one of the reasons I write for Blaze, is I love the real life – this could really happen – storylines. To me, a good suspenseful story has that element of real life possibility as well. Anything that you think might really happen to you, or someone you know, takes on an edge of danger that reaches beyond the pages of the book, or the screen you are watching a film/television show on. Those are the stories that really scare me. Of course, I say that but put me in a movie seat with zombies on the screen and I’ll scream so loud the entire theater will know I’m there. They aren’t real but dang it, they hit some horror story spot in me that I don’t like. DH, of course, just LOVES zombies.

In THE STORM THAT IS STERLING I’ve created a world that began to take form for me way back in 2004 when I was traveling to Vegas often and always hoped for a trip to Area 51. Somehow, the roulette tables always won my attention but not my imagination. My ex-father-in-law was in the army, at Roswell, and part of the cleanup. We found this out near the end of his life. He never talked about it until right before he died and even then it was cryptic. He said enough to make me believe there could be some reality to government facility with secret government programs. What if the government was/is creating super soldiers and hiding them? Men who fight for their country with a little extra ‘something something’ going for them? I started this series at Ellora’s Cave and stepped away from it but it never let go of me. I wanted to write it but different which lead to the creation of THE ZODIUS SERIES.

In THE STORM THAT IS STERLING, Sterling is a tormented solider who has lost everyone he has ever loved. He doesn’t intend to lose Vegas to a new street drug killing its users. Finding the people behind this drug, will bring him face to face with a woman from his past whom he’d had feelings for. Solving the mystery of the drug, and of who is selling it, will make him dare to love, dare to risk losing someone again. But saving his city might mean losing the only woman he has ever loved.

More about THE STORM THAT IS STERLING HERE

And what better way to read Sterling’s story than on a NOOK COLOR?! Want to win one? Just comment here today for one of several chances to enter. Just say ‘hi’ or tell me what scares you? Zombies? Serial killers? Serial killers who turn into zombies? Oh. That sounds like a story idea!:)

Enter the Thrills & Chills giveaway…throughout the end of October and early November, Jaci, Shiloh & Lisa will be visiting each other’s blogs, leaving excerpts & guest blogs. On those days, all you have to do is comment on the T & C guest blog or T & C guest excerpt (comment as often as you like, but you only get one entry per post). When the Thrills & Chills blog tour is over, one lucky commenter will win a Nook Color!