NOTE: THE CONTEST IS CLOSED.

Why no, I haven’t been captured by pygmy warriors and carried off into the night, nor have I fallen into a deep sleep, awaiting that fairy tale kiss to wake me. (Though a long nap would be nice).

But I did realize it’s been a while since I blogged. I’d like to tell you I’ve been off on some great adventure, but….no. I’ve just been here, writing away on Playing to Win, working on a proposal, and realizing in about a month THE HEART OF A KILLER will be releasing!

Since I’ve neglected the blog, I realized there are some great books that have been released, and some about to release. So how about I do a giveaway?

My awesome friend Maya Banks new Highlander series is doing so well. IN BED WITH A HIGHLANDER has been on the USA Today bestseller list for three weeks now! Congrats, Maya! The next book in the series, SEDUCTION OF A HIGHLAND LASS, releases next week. I love this series so much. 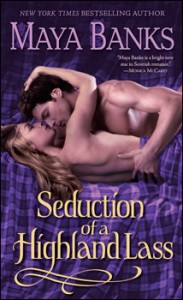 Fiercely loyal to his elder brother, Alaric McCabe leads his clan in the fight for their birthright. Now, he is prepared to wed for duty, as well. But on his way to claim the hand of Rionna McDonald, daughter of a neighboring chieftain, he is ambushed and left for dead. Miraculously, his life is saved bythe soft touch of a Highland angel, a courageous beauty who will put his fealty to his clan, his honor, and his deepest desires, to the test.

An outcast from her own clan, Keeley McDonald was betrayed by those she loved and trusted. When the wounded warrior falls from his horse, she is drawn to his strong, lean body. The wicked glint in his green eyes ignites a passion that will follow them back to Alaric’s keep, where their forbidden love draws them deeper into the pleasures of the flesh. But as conspiracy and danger circle closer, Alaric must make an impossible choice. Will he betray his blood ties for the woman he loves?

The ever awesome Gena Showalter has a new book releasing next week as well. DARKEST SURRENDER is the latest in her Lords of the Underworld series: 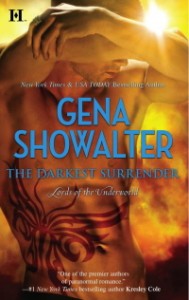 The Lords of the Underworld return in this enthralling tale of an immortal warrior determined to win and the beautiful seductress he can’t resist.

Possessed by the demon of Defeat, Strider cannot lose a challenge without suffering unimaginable pain. For him, nothing stands in the way of victory. Until Kaia, an enchanting Harpy, tempts him to the razor’s edge of surrender.

Known among her people as The Disappointment, Kaia must bring home the gold in the Harpy Games or die. Strider is a distraction she can’t afford because he as an agenda of his own – steal first prize, an ancient godly artifact, before the winner can be named. But as the competition heats up, only one prize will matter – the love neither had thought possible…

And the amazing Carly Phillips has a new series out with her newest release, Serendipity. Such a fun, romantic book: 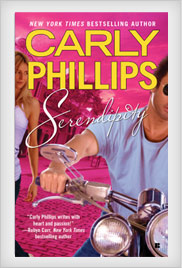 where love, fate and fortune are intertwined …

Faith Harrington was the classic girl of privilege–until her father was convicted of running a Ponzi scheme and then her marriage crashed and burned.

Now Faith is back in her hometown, hoping for a fresh start. But her father’s betrayal has rocked Serendipity – and not everyone is ready to welcome her with open arms. Then she runs into her teenage crush — the dark, brooding Ethan Barron. Ethan, no stranger to scandal himself, never imagined he’d own the mansion on the hill, much less ever again come face to face with Faith–the princess he once kissed senseless. The chance meeting reignites the electric charge between them.

Still, when Ethan hires her to redecorate what was once her childhood home, Faith is sure that getting involved with the town’s notorious bad boy will only lead to trouble. But her heart has other ideas. And so do the townspeople of Serendipity …

So there you have it–an historical, a paranormal and a contemporary romance. Something for everyone.

Now take your pick of which book you’d like to have, or just tell me you’d like any of the three. I’ll choose three winners on Monday!

And as usual, The Rules:
Must be 18 years or older to enter
Void where prohibited
Open to international entries
And hey, if you’d rather have a Kindle copy instead of print, just let me know in the comments. Always happy to spread the digital joy.

Have a great weekend!