THE HEART OF A KILLER will be releasing in October, so it’s time to start talking about how I excited I am about my upcoming romantic suspense series! 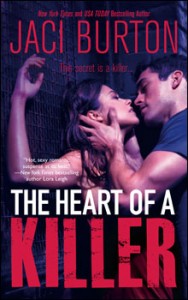 I thought I’d pop a little excerpt up to tease you about this upcoming book.

Blurb and excerpt after the jump. You can also find another excerpt, along with preorder links here

The last time Detective Anna Pallino saw Dante Renaldi, they were in love. Now, he’s part of the connection to a string of fresh homicides and a horrible assault Anna only survived thanks to him.
More than anything, Anna wants to trust Dante. But as the bodies and the coincidences stack up, Anna will have to decide, and fast: Is the man she owes her life to the very same one who wants her dead?

She skirted around him and went into the living room, picking up empty beer cans. After she dumped them in the trash, she pivoted and he was right there behind her again with a stack of cans in his hand.

“Quit sneaking up on me.”

“You’re a cop. I wouldn’t think anyone could get a stealth drop on you.”

Unnerved, she shoved him aside and went back into the living room. “Normally no one does. You’ve got ninja skills.”

He laughed and slid onto the sofa next to her, stretching his long, lean legs out in front of him.

“It’s still early.” He stretched his arms over the back of the sofa.

She refused to notice the lean muscle of his forearms, or the dark hairs. Or his tan skin that made her want to ask where he’d been outside lately.

His grin irritated her. “I make you nervous.”

“No, you don’t.” She leaned forward to pick up the pizza boxes.
“Anna.”
He laid his hand on her arm and pulled her back. “Talk to me.”

His touch had an effect on her. No man’s touch did that. She hated that Dante’s did. He was a closed-up mystery, a few pieces of a giant puzzle. She wouldn’t ask him again where he’d been.

“We have nothing to say to each other anymore.”

He swept her hair away from her face. She knocked his hand away.

Instead of being offended, he smiled. “I like that you’re tough. It makes me worry a little less about you.”

“You have no right to worry about me at all.” She pushed off the couch and grabbed the empty pizza boxes, shoved them in the trash can in the kitchen. This time she knew Dante was behind her, her senses tuning to him. She put the lid on the trash and turned around.

He was so big. Big guys tended to freak her out, at least when they invaded her personal space. Caged between him and her kitchen counter, she expected the normal panic to set in. She took things with men slow and easy. Too much too fast and things took a nosedive.

But everything about Dante was familiar to her, from his scent to the color of his eyes to the way his skin felt under her hand. She balled her fingers into her fists to keep from reaching out to touch him, to find out if he still felt the same to her. She took a deep breath, inhaling the crisp scent of him. Her heart banged a hard rhythm against her chest, but this time it wasn’t the familiar choking panic—it was something else entirely.

“I do make you nervous. I never used to do that.”

“I’m not nervous. You’re crowding me and it’s pissing me off.”

He took a few steps back, his brow furrowing. “You still freaked out about that night?”

“No.” She walked past him, but he reached out and gently grasped her arm, pulled her against him.

Unlike other men—who she would have clocked for grabbing her—she melted against him. Dante’s body was familiar to her. She couldn’t help herself, she had to touch, to test her reaction. She slid her palms along his biceps. Hard muscle and soft skin eased across her hands, making her tingle in places that just flat out never tingled.

And he let her, this time not pushing to be the aggressor. He let her explore without moving in to take.

Men and her and relationships—yeah, that didn’t go well. Maybe she didn’t try hard enough. She put all her energy into her work and there was nothing left over for guys. Sex wasn’t worth all the hype anyway. Quick release and out the door—that was her motto. It had worked well over the years for both her and the guys she chose.

When she was a hormone-filled teenager—before that night—and she and Dante had been filled with heat and desire for each other, then yeah, there’d been the promise of something incredible.

But all that had changed.

Now she was chest to chest, hip to hip, thigh to thigh against one solid wall of muscle, and she felt stirrings of something she hadn’t felt in a very long time. Something hot and delicious, like her blood had just slowed down in her veins and begun a slow heat.

Her skin prickled with goose bumps, her breasts felt full and her nipples tightened. She jerked her head up and read flat-out desire all over Dante’s face. He hadn’t budged, wasn’t moving his hands, but, oh, man, were there clear signals in his eyes.

She’d never been so tempted to take what was so obviously being offered, to lift her fingers and touch his mouth, to taste him, to forget everything and fall back twelve years and take up where they left off.

And she still had no idea who he was, where he’d been, or what his involvement was in the murder the other night.