NOTE: THE CONTEST IS ENDED AND THE WINNERS HAVE BEEN CHOSEN. THANKS FOR PARTICIPATING!

There are two amazing books releasing next week. I’ve read them both already (lucky me!), so i’m going to give you all a chance to win them.

The first one is Maya Banks HIDDEN AWAY, the third book in her amazing Kelly Group series. Awesome action adventure romance. Hot heroes, amazing heroines, sexy and romantic. I’ve loved every book in this series. 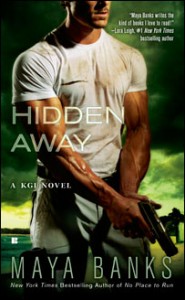 A man who shoots first and asks questions later…

Most people would take an all-expenses-paid trip to the beach in a heartbeat. Garrett Kelly only accepts to keep tabs on Sarah Daniels, who’s in hiding after witnessing a murder by Marcus Lattimer, her half-brother—and a personal enemy of KGI. This gig may be beneath a disciplined soldier like Garrett, but if he gets a shot at Lattimer, it will all be worth it…

…and the ultimate moving target.

But Garrett hadn’t counted on falling for Sarah. He’d considered seduction as a tactical maneuver, but when he glimpses Sarah’s dark past, he feels an urgent desire to keep her safe—even after she disappears on him. Garrett doesn’t know exactly who, or what, Sarah’s running from, but whatever it is, she’s running for her life…

The second book is Julie James A LOT LIKE LOVE. Funny, sexy contemporary romance, with a to die for hero and a feisty heroine. I loved this book so much. 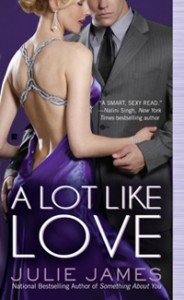 THE FBI WANTS HER COOPERATION.

As the daughter of a billionaire and the owner of the city’s top wine store, Jordan Rhodes is invited to the most exclusive parties in Chicago. But there’s only one party the FBI wants to crash: the charity fundraiser of a famous restaurateur, who also happens to launder money for the mob. In exchange for her brother’s release from prison, Jordan is going to be there—with a date supplied by the Bureau.

As the top undercover agent in Chicago, Nick McCall has one rule: never get personal. This “date” with Jordan Rhodes is merely an assignment—one they’re both determined to pull off even if they can’t be together for five minutes before the sarcasm and sparks begin to fly. But when Nick’s investigation is compromised, he and Jordan have no choice but to pretend they’re a couple, and what starts out as a simple assignment begins to feel a lot like something more. . .

To be entered to win the contest, just tell me which book you’d like to win. Or if you want either, just tell me that. I’ll choose two winners, one for each book, on Monday.

Contest is open internationally. You must be a minimum of 18 years old to enter. Contest void where prohibited.