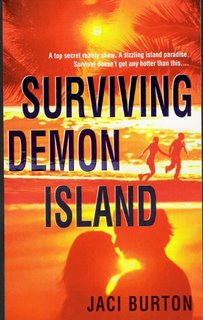 UPDATE: I JUST received the OFFICIAL back cover copy from my editor!!!!! Here it is:

She’s all curves and combat boots.
He’s six feet of lean, dangerous male.
Join them in a game of survival
That’s as real—and hot—as it gets.

What’s America’s top female action star doing on a tropical island shrouded in secrecy? To Gina Bliss, competing in a survival-type reality show is a nice change from fending off on-screen villains. Until she meets real-life action hero Derek Marks. A survival specialist in a tight black T and sexy stubble, he’s arousing every bad-boy fantasy she’s ever had…and testing her survival skills to the max.

Martial arts, jungle warfare—Derek’s done it all. But his latest mission is more dangerous than a stick of dynamite. Try telling that to the sexy, adrenaline-pumped actress who’s got his libido racing off the charts. As the heat rises between them and real-life violence erupts, suddenly Derek and Gina are on the run…and when they uncover a secret so explosive it could blow the lid of their so-called reality show, these two unlikely heroes are about to discover what surviving’s really about….