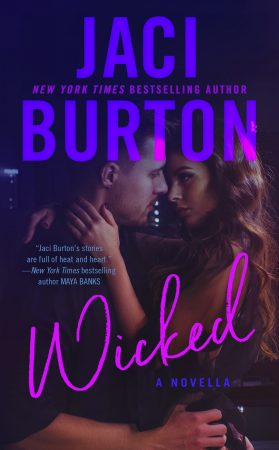 Abby, Blair, and Callie are inseparable best friends who delight in sharing their wildest secrets and dares. But their latest bet is the boldest one of all: Each must sleep with whomever the other two have chosen for her. And come back with every juicy detail… Wicked tells Blair’s story.

Blair is the town heartbreaker. Afraid to commit, she’s broken off three engagements. Yet there’s one man she never had the courage to bed—the one who knows her better than anyone. But now, to meet Abby and Callie’s challenge, she’ll have to open up her heart and risk losing the only man she’s ever loved.

To read Abby and Callie’s stories check out the novellas, Wild and Wanton.

“Seriously, Abby, what have you got to lose?” Callie asked. “It’s been forever since you dated. And it’s the country club. Isn’t Chad a member?”

Blair laughed. “Even better. Wouldn’t he just die to see you walking in there with Mike and Seth? I mean literally die with jealousy?”

“Please. Chad didn’t care what I did when we were married. Why would he care now?”

“Because he always thought he owned you. You know he still does,” Blair said. “And it would kill him to see you happy. He wants you pining away and miserable without him, the rotten, cheating bastard. I think you should go just to stick it to him, show him you’ve moved on. That you’ve got a career and not one man, but two to take his place.”

It would be worthwhile to see Chad’s face while she celebrated with Seth and Mike. Not that she had a single vindictive bone in her body. She took what she was entitled to by law in the divorce, and nothing more, much to the irritation of her attorney. She’d just wanted it to be over, wanted to forget the shame and embarrassment, the public humiliation Chad caused her with his overt cheating. But just once she would like to show him she’d made a decent life without him, and that she could get another man. Maybe even two.

“I love when you grin like that,” Blair said. “It’s so evil. Reminds me of the old days.”

Abby couldn’t help it. She had actually started to visualize events, from the country club to what might happen afterward. But could she go through with it if dining and dancing led to something else with Mike, or Seth, or even, God help her, both of them? It hadn’t occurred to her that they might be into that kind of action until Blair mentioned it. She was hardly a woman of the world. She didn’t have experience with kinky sex like this. Not that she hadn’t fantasized about it. But fantasy was one thing. Reality was something entirely different.

“I’d sell my soul for a hot night with two men like Mike Nottingham and Seth Jacobs,” Callie said with a sigh. “Or even one of them. Sex has been virtually nonexistent in my life for, well, you know. A long time.”

Callie stared into her margarita like a crystal ball. Abby knew she was thinking of Bobby. She slid her hand over Callie’s. “You miss him.”

“Yeah.” Callie smiled. “It’s time to move on, though. It’s been long enough.”

“And Bobby would kick your ass if you pined away too long,” Blair added, moving her hand on top of Abby’s and Callie’s.

Callie’s eyes glistened with unshed tears. Abby knew how much Callie had loved her husband. Losing him to cancer had been a harsh blow. But Callie was one of the toughest women she knew and had weathered it well. She’d kept on going, because that’s what Bobby would have wanted her to do. But Callie was right. It had been long enough. She had to start living again.

“So I guess you’re the only one getting any these days,” Callie said with a grin.

Blair arched a brow. “Honey, I’m always getting some. Though I have to admit, the pickings have been rather slim lately.”

“That’s because you keep turning down all those marriage proposals, and the ones you do accept, you dump at the altar at the last minute. If you’d just jump on Rand McKay like you should have done fifteen years ago, your sex and love woes would be taken care of,” Abby teased, knowing it would irritate Blair, but then again, Blair needed to hear it. She’d carried a torch for Rand since high school. And everyone knew it, including Rand. But for some reason, Rand was the only guy Blair refused to have anything to do with.

“Sheriff Rand McKay is not on my radar at the moment,” Blair sniffed. “And frankly, he isn’t my type.”

Abby looked at Callie, then turned to Blair, both of them bursting into laughter. “Not your type? Not your type? Puleez. He is so your type. You practically drool every time he walks by.”

“Do, too,” Abby insisted, glad the subject had shifted to someone besides her.

“Okay, so maybe I do need sex. Which does not by any stretch of the imagination mean that I need Rand McKay, understand?”

“Got it,” Abby said, though she and Callie exchanged another knowing glance. Oh yeah. Blair had it bad for Rand.

“I guess we all need a good fuck,” Blair said. “You know what that means, don’t you?”

Abby was almost afraid to ask. Blair had ‘that look’ in her eyes. And when Blair had that look, it meant trouble. “What does that mean?”

“Cowards. You know damn well it’s what we all need. And another round.” Blair shifted on the bench and searched the now crowded bar, frowning when she couldn’t find their waitress. “I’ll be right back. Start thinking.”

After she left, Abby cast a desperate look at Callie. “I hate when she does this.”

Abby nodded. “Me, too. God only knows what kind of bet she’s going to come up with. I’m too old for this shit.”

When Blair returned with a slightly irritated waitress in tow, she had that gleam in her eye. “I’ve got it. And margaritas, too.”

“You’ve got what?” Callie asked.

“Aren’t we a little too old for this? I mean, we’re way past high school.” Callie cast hopeful eyes in Abby’s direction.

“Callie has a point. We can’t very well toilet paper anyone’s house at our age.”

“For heaven’s sake, that’s not at all what I’m suggesting and you know it,” Blair said. “And you’re right. We are past the days of egging and TPing. But the gauntlet’s been thrown, and I’ve suggested a bet, and you know damn well you can’t back out now.”

Abby groaned. She needed advice and commiseration, not a damn bet. Sometimes she wondered why she bothered asking for help when all she’d get in return was more chaos in her already frenetic life. “Okay, what is it?”

Abby waited, but Blair didn’t say anything else. “That’s it? Sex?”

“Well, where’s the rest of it?” Callie asked.

“There is no more, you morons. God, isn’t that what we all want? One weekend of no holds barred, unbridled sex.”

“Sounds good to me,” Callie said. “But we hardly need a bet for that. The way things are right now, at least for me, we need a miracle. Where do you propose we get said sex?”

Blair wriggled in her seat. “Oh, this is where the fun comes in. Each of us takes a weekend turn. We have to enjoy one weekend of blistering hot sex. No strings, of course. It’s not like you have to locate and meet the guy of your dreams or anything. You just have to fuck someone.”

“That’s doable,” Callie said, munching on a nacho. “So what’s the catch?”

Abby smiled. With Blair’s bets, there was always a catch.

“The other two get to pick the guy.”