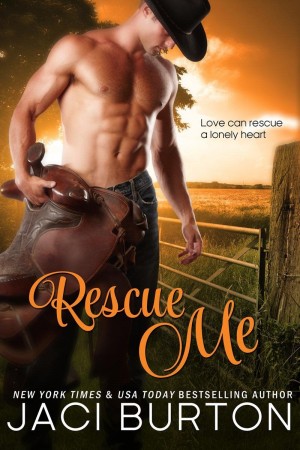 Sabrina Daniels is looking for a new life after a bitter divorce from a controlling husband. She finds the answer to her dreams of the future in Kyle Morgan, who’s looking for an investor in his Rocking M Ranch in Dreamwater, Oklahoma. It’s a fresh start for Sabrina, and she’s always wanted to own a ranch.

Kyle’s ranch is in trouble, but Sabrina is even more trouble, and he wants nothing to do with a woman who knows nothing about ranching. But Sabrina has the money, and she’s a reluctant solution to his financial problems.

Working side by side, Kyle and Sabrina find surprising common ground, and a sizzling chemistry neither can deny. They both have hearts in need of rescue, and love is the sweetest savior. Kyle Morgan was so intent on what he was doing he thought the female voice above him was his sister Jenna, bugging him about coming in for lunch.

“I don’t need rescuing right now. Get lost.” Another turn of the wrench and he might actually be able to get the blasted oil pan loosened.

“That’s not what this paper says.”

He slid out from underneath the truck and squinted in the midday sun to see who thought he needed rescuing. All he could make out was a vague shadow attached to very shapely legs.

“Are you going to lie there and stare at me all day?” Her voice was deep and sexy, like skinny-dipping at midnight. Risky, forbidden, yet irresistibly appealing.

He quickly got to his feet and grabbed the shirt off the hood of the old blue Chevy truck, wiping his hands and sweat soaked, dirty face. Blinking to clear the sunspots out of his eyes, Kyle got his first look at the woman attached to the voice.

Stunning, was his first thought as he gazed at her beautiful face. Golden blonde hair hung in cascading waves over her shoulders and rested just above her full, high breasts. Eyes the color of amber ale stared levelly at him as she licked her lips nervously.

“Are you Kyle Morgan?”

I don’t know. Am I? He seemed unable to think about anything except the vision standing in front of him. “I guess I am.” Great answer, dumbass.

“Then as I said before. I’m here to rescue you.” A smile that could light up the entire state of Oklahoma graced her face as she held out her hand. “I’m Sabrina Daniels.”

Kyle was dimly aware of her slim, warm hand in his as she shook it with fervor. Her skin was soft, like sliding his hand over silk sheets, making him wish he’d had a chance to wash the grime off his.

She nodded enthusiastically. “Yes. I’m so glad to finally meet you Kyle.”

So this was the woman who was going to spend the next three months at the Rocking M Ranch. Three months, and he would have to work closely with her every day. He stifled a groan as his eyes washed over her cover model looks and centerfold body, trying not to lick his lips at the way the blue silk dress hugged her womanly curves. Surely this woman was punishment for something bad he’d done in the past.

“I know. I arrived this morning and thought about grabbing a hotel and waiting until tomorrow but I was so excited I decided to come out a day early. I didn’t think you’d mind since we had an agreement and you were expecting me. You were expecting me right?”

The woman waved her hands around as fast as she was talking. He was already getting a headache and watching her swat invisible flies in the air was making him dizzy to boot.

“At first I planned to call, and then I thought if I called you might not let me come today and I really wanted to, so I decided to just show up and throw myself at you and here I am.” She inhaled a huge breath of air.

Trying hard to recall if he’d had any whiskey for breakfast that could possibly be screwing with his clarity, he remembered he’d had coffee. So the reason for his confusion had to be the five foot six fast talking tornado standing in front of him.

“Yes I can see you’re here.” She might be here, but he’d be damned if he was going to be pleasant. No matter how good-looking she was, or how her voice reminded him of sex and sin, or how her face showed the enthusiasm of a child. This wasn’t his idea in the first place. “So now what?”

She tilted her head, showing off a creamy expense of slender neck. Kyle inhaled sharply, trying to avoid thinking of her as a woman. A beautiful, desirable woman. He wanted to think of her as a nuisance. Which she was going to be for the next three months.

“Well, now I guess we can get started.”

“Get started with what?” He must have had whiskey with his coffee this morning.

Sabrina smiled shyly. “With my training.”

Immediately his thoughts strayed to the kind of training he’d like to give Sabrina Daniels. Damned if all the blood in his brain hadn’t migrated toward baser pastures. His long dormant sex drive sure picked a fine time to spring to life again. Great – now he could add lack of sex to his already long list of frustrations.

Maybe if he thought about all the negative things her presence represented he could get his mind off the fact Sabrina Daniels was quite an attractive woman.

It wasn’t working. His mind continued on its wayward sexual course, heating his blood. Maybe it was the weather. It was damn hot outside, way too hot for late April. He was dirty and sweaty and felt like a pig while she looked fresh and clean and smelled like peaches. He shuddered to think what he must smell like, but it was probably closer to rotted fruit.

He looked her over from head to toe. She crossed her arms across her chest, obviously uncomfortable with his scrutiny. Good. “I hardly think you’re dressed to begin anything, other than maybe hosting a cocktail party. And gee, you just missed the one we hosted last night. All the Dreamwater elite were here.”

Sarcasm obviously wasn’t lost on her as she tapped her sandled foot in annoyance. Maybe she’d be so irritated she’d leave. He should be so lucky.

“Kyle. I’m hot, I’m thirsty, and I’ve driven a long way today. It’s my understanding we had an agreement and you were expecting me. But if there’s a problem with our contract we can discuss it. Is there some place out of the sun we could sit and talk?”

Well hell. If his mother were still alive she’d be kicking his butt for lack of manners. He finally noticed sheens of perspiration moistened her face, and the shadow between her breasts that kept drawing his eye was damp. She looked about ready to pass out.

She nodded gratefully and Kyle directed her toward the large brick ranch house, following behind her. Watching her perfect backside swaying as she walked, it became quite clear this bargain he and his family had struck was a huge mistake.

Kyle didn’t want to do business with Sabrina Daniels, but couldn’t pinpoint exactly why. Maybe it was the instant attraction he felt for her, bringing to life feelings long held in check. More likely it was because she now held a financial interest in his family’s ranch. That meant an outsider owned a part of the Rocking M.

When his parents died and he and his younger brother and sister took over the Rocking M, they vowed the Morgan’s would retain ownership. And despite everything they’d been through, that’s the way it had remained. Until now. Now Sabrina Daniels owned a portion of their ranch. At least temporarily.

If they didn’t need the money so damn bad, if he hadn’t been forced to pay his cheating ex wife all that cash in the divorce settlement, they wouldn’t be in this predicament now. This was his fault and an investor was the only way to dig the Rocking M out of the deep financial hole he’d put it in.

The sooner he finished his business with Sabrina Daniels and got her off the Rocking M, the happier he’d be. No one was ever going to own this ranch but a Morgan.

“Jaci Burton does a magnificent job in creating an engaging story with characters that take root in your heart! Kyle and Sabrina hold a special place in my heart(and on my bookshelf!), with the fiery, passionate energy between them, tempered by compassion. As it seems to be with all of Jaci's books, the main characters aren't the only ones I've fallen for! Rescue Me is a journey about getting through the tough spots, learning to communicate, banding together, and falling in love despite yourself. Definitely a book for multiple reads, and I'm hoping for a sequel!”

“Rescue Me is a charming story that explores passion, deceit, and trust. I took great pleasure in reading this exhilarating novel. The sexual tension between Kyle and Sabrina ignited instantly and remained flaming-hot throughout the entire book. There were times where I wanted to tear into Kyle’s hide because of his detestable ways towards Sabrina; however, he quickly redeemed himself in my eyes. This is one sweet and spicy romance that is sure to please many western genre-type readers. So run, don’t walk to purchase Rescue Me by Jaci Burton.”