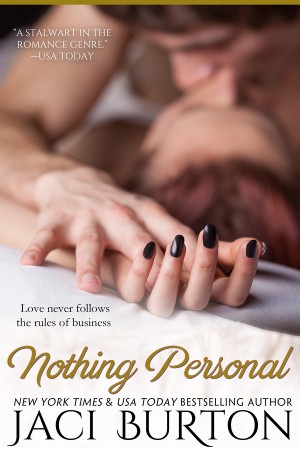 She tried to stand patiently while Ryan slowly slipped each satin covered pearl button from its tiny loophole. But his touch did things to her sense of equilibrium. She shivered each time his warm knuckles brushed the bare skin of her back.

“Are you cold?” Ryan’s voice whispered softly against her ear.

Ryan’s hands stilled. “Does my touch bother you?”

His touch most definitely bothered her. But not in the way he thought.

She steeled herself against any more outward signs of his effect on her. It wouldn’t do at all to fall into bed with him, no matter how much his skin on hers made her tingle. She’d made a bargain for two months and needed that time to get to know her new husband.

These were new sensations, new feelings, and her senses were already on overload from the day’s events. She couldn’t handle much more without a complete meltdown.

But then his hands moved lower as he freed the buttons near her bottom. The chills returned.

“I think there’s enough undone now that I can get out of this thing,” she stammered.

“Just a few more,” he said, ignoring her request. Obviously his touch on her skin didn’t affect him at all. “Do you need me to help you take it off?”

“No!” Faith cringed, not meaning for her denial to sound so forceful. She turned to Ryan. His gray eyes darkened like smoldering storm clouds. Maybe he wasn’t so oblivious to the contact between them. “What I meant to say was, I can get this off by myself. But thank you, anyway.”

He threw her a crooked smile. Now that her dress was all but slipping off her body, why didn’t he leave?

“I’ll just wait here while you change, in case you need me again. No need wandering the halls half-naked for help.”

Half-naked. Her cheeks flushed with heat. The dress was completely open in the back, and she had her hands firmly pressed against her chest to keep it from dropping to the floor. “It’s almost falling off me right now, Ryan. I hardly think I’ll need any more assistance. But thank you for your help. Goodnight.”

Hoping he’d grab a clue that she wanted to be alone to undress, she fled to the dressing area.

The satin nightgown. She had no other choice. It was either that or eat her sandwich naked. Bet Ryan would like that. The way his eyes had gleamed when he saw her in her wedding gown led her to believe there might be a spark of interest.

She pushed the thought aside. Ridiculous. Ryan McKay had never been interested in her. Why would he be? She was nothing like the women he escorted. Not even close.

Attempting to redirect her thoughts to her hunger, she removed her underthings and slipped the gown over her head. Unable to resist, she ran her hands down the cool satin. A quick glance in the mirror shocked her. The gown molded to her body like a lover’s hand, clearly showcasing every minimal asset she had.

Why hadn’t she heard the door close? Surely Ryan had left by now. Faith waited a few more seconds for the sound of the door closing, but didn’t hear anything.

He was still there but his voice was muffled.

“What are you doing?”

“Oh.” She peered around the doorway into the bedroom. He sat at the table next to her bed, eating one of the sandwiches Leland had fixed for her.

“You haven’t eaten yet, Faith. Come out and have one of these sandwiches.”

“No, that’s okay. I’m not that hungry, really.” Right. She was surprised Ryan couldn’t hear her stomach grumbling in the other room.

“Don’t be ridiculous. Come out here now and eat with me.”

Fortunately the gown had a matching satin wrap that she quickly donned. Hunger won out over modesty. She wanted to get some food before he ate it all. She tightened the belt on the robe and entered the bedroom.

As she crossed in front of him, his eyes widened. Faith clutched the edges of the robe over her chest, feeling less than adequate in a gown that should have been worn by a goddess like Erica, not by her. She didn’t do it justice.

Faith nodded. “Starving. I hadn’t realized that I hadn’t eaten until Leland mentioned something about food.”

Ryan smiled. “I know. When I saw the food on the table my stomach reminded me I hadn’t eaten since breakfast. You don’t mind, do you?”

“Why would I mind?” She grabbed a sandwich and tried not to shove it in her mouth. With as much dignity as she could muster considering the depth of her hunger, she took a bite of the delicious turkey sandwich.

He sipped a glass of tea and watched her eat. At first she was self-conscious, but then her appetite took over and she downed the sandwich in no time flat.

Satisfied, Faith sat back and took a drink. And still he stared at her.

“Is something wrong?” She knew he wanted to say something, but didn’t. She chewed her lip in anticipation.

Without a word he reached across the table and drew his thumb against the corner of her mouth, then slowly dragged it across her bottom lip. Faith watched in rapture as he brought his thumb to his mouth and licked it with agonizing slowness.

“You had mayonnaise on the corner of your lip,” he said, his voice low and oh-so-sexy.

Was he deliberately trying to drive her crazy? She grabbed the napkin and swept it across her mouth. “Thank you.”

His dark eyes warmed her. “It was my pleasure.”

She couldn’t tear her gaze away from him, despite knowing she should stop whatever was happening between them. She simply could not deal with any more today.

Thankfully, Ryan stood. “I’m sure you’re tired. I’ll let you get some sleep.”

Faith rose from the table, nodding. “Thank you for your help with the dress.”

“You’re welcome,” he said and stepped toward her, taking her hands in his. He pulled her against his chest and slid his arms around her back.

The crisp hairs of his chest rubbed her breasts. The thin silk of the gown and robe did little to keep the heat of his body from hers. Her nipples hardened against him, the rush of desire almost dropping her. Her limbs turned to gelatin and she felt weightless and lightheaded.

“Two months, Faith,” he said softly as his head dipped towards her. “That’s a very long time. Are you sure?”

This wasn’t fair. No one had ever held her like this, made her feel such uncontrollable need. She wanted so much to experience these feelings, to step toward that desire and know what she hadn’t known before. Blood pounded at her temples and liquid heat pooled deep within her. She was certain Ryan could sense her reaction because he tightened his hold on her, his hands softly kneading the muscles of her back, gradually sliding lower and lower.

The smoke-filled depth of his eyes drew her in, hypnotizing her senses, rushing over her like a wildfire out of control.

If his lips drew any closer they’d touch hers. Faith was sure she’d die if they did. She was already losing control, inhaling his scent with rapid breaths, his hands burning against the silk of her gown, drawing her ever nearer to the heat of his lips.

Then just as suddenly as it started, the storming inferno was over. Ryan stepped back, his lips parted as the hint of a smile crossed his features.

“Tomorrow, you move into my bedroom. Goodnight, Faith.”

He turned around and walked out, closing the door behind him.

Faith stood in the middle of the room, wondering what had just happened. Her breathing still hadn’t returned to normal. The rhythm of her heart continued to pound its staccato beat. She still felt him, smelled him, all but tasted him on her lips as the memory of his thumb against her mouth singed her skin.

Despite her thoughts about needing to wait, wanting to wait, she had been ready to leap into her husband’s arms.

She thought she had more self-control than that. It was obvious her inexperience was no match for the powerful charm of Ryan McKay. She’d have to be extra careful over the next couple months and try to keep her distance from him. Too much of his overpowering sexuality and she’d self combust. Clearly, she was not ready at all for an intimate encounter with Ryan.

And yet, two months was a very long time.