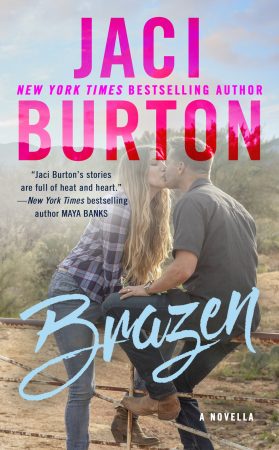 A country girl embarks on a brazen pursuit of love in this bold romance from New York Times bestselling author Jaci Burton.

Ranch owner Jolene Mcmasters has always worked hard—and played hard. She’s used to going after what she wants until she gets it. And what she wants is ranch foreman Walker Morgan. The only problem is Walker can’t afford to lose his job by getting too familiar with his boss. And getting intimate with Jolene is the last thing on his mind—or maybe it’s all that’s been on his mind lately, which could be a career ender for him.

But Jolene wears Walker down and soon the two of them are having hot interludes on the ranch and are together all the time–but only in private. Jolene wants more–she wants Walker to be by her side in all ways. But Walker holds a secret that could end his relationship with Jolene for good. Can Jolene trust in her love for Walker, or will this secret break her heart?

As soon as the obligations of supper and conversation were over, Valerie went up to her room to get away, until Jolene knocked on her door and told her Lila wanted them in the family room. Valerie blew out a sigh of frustration. She’d really hoped to hide in here for the rest of the night, but Lila obviously wanted to talk to them. And if there was one thing she’d learned over the years, it was that you didn’t tell Lila no.

She made her way downstairs and into the oversized family room complete with three sofas, five lounge chairs and a huge plasma television that hadn’t been there the last time Valerie had been home.

“Who bought the television?” Valerie asked when she walked in.

“I did,” Jolene said. “We have movie night every now and then when the weather’s too bad to go to Dirk’s bar in town. Anyone who’s around comes. Beer and snacks.”

“Fun.” Brea kicked off her grotesque sandals and pulled her feet up onto the sofa, tucking them under her skirt.

Brea looked over the sofa at her shoes. “What? They’re comfortable.”

Jolene scrunched her nose. “They’re horrible. Are you freakin’ homeless or something?”

“You could use a pedicure, too, Brea,” Valerie added, grimacing at the state of Brea’s feet.

“You guys are so funny. Just because I don’t dress straight out of the pages of a fashion magazine like Valerie, or as a cowgirl like you Jolene, doesn’t mean I don’t have it going on.”

“Oh, you certainly have something going on, Brea,” Jolene said. “I just have no idea what it is.”

Brea shot a pleading look to Valerie, who shrugged. “I don’t like the shoes, either. And you need to do something with your hair.”

Brea frowned. “Who decided it was pick on Brea night?” She shot a glare to Jolene. “You dress like a man.”

Jolene rolled her eyes. “It’s my job, moron. You want me to wear a miniskirt to wrestle calves?”

“The guys would probably enjoy seeing that,” Valerie teased.

“Yeah, I’ll just be they would. And having dust up my coochie would be oh so pleasant.”

Right now Jolene wore nearly coochie-baring shorts and a tank top that hugged her generous breasts. She’d taken the pigtails out and brushed her hair so the long blond strands lay in soft waves over her shoulders. Really, her sister was naturally gorgeous, even without a bit of makeup on. It was so unfair. Heart-shaped face, full lips, peachy complexion and hazel eyes with long lashes. She didn’t need to do a damn thing to look beautiful. She was country girl personified, and had the face and body to match.

“What are you staring at?” Jolene asked.

“I was just thinking how naturally beautiful you are.”

Jolene’s lashes swept down, then back up again. “Stop teasing me.”

Jolene looked to Brea. “You could be beautiful, too, if you’d cut that mop of hair so people could see your pretty face. And put on some clothes that accentuate your body. Honestly, Brea, what are you hiding from?”

Brea shook her head. “I’m not hiding from anything.” She picked up a book and shoved her face in it.

Jolene looked over at Valerie. “Not hiding. Right. Have you ever known this girl to not have a book glued to her nose?”

“Never,” Valerie said. “Brea. Are you dating anyone?”

“When was the last time you did?”

Brea dropped the book in her lap. “Of course I do. I’ve had sex before. I’m not a virgin. For God’s sake, I’m twenty-eight.”

Valerie laughed. “No, I’d say she definitely likes guys. Didn’t you see the drool on her chin at supper tonight every time she looked at Gage Reilly?”

Brea’s eyes widened. “I was not drooling over Gage.”

“Yes, you were. You couldn’t take your eyes off him. Not that I blame you. He’s gorgeous. All that lean muscle, and his face his gorgeous with his short brown hair and ocean blue eyes. That’s one hell of a sexy package. Any woman would drop at his feet. You might try to hide behind your hair, but I saw who you were looking at.”

Brea picked up her book. “I’m not even going to dignify this ridiculous conversation by participating in it. It’s juvenile.”

“Coward,” Jolene said. “Always hiding on your computer and in your books. Some things never change.” She poked Brea’s shoulder. “Real life is out here, Brea. You should try living it.”

“I see you and Mason still get along well,” Jolene said, turning her attention from Brea to Valerie. “You two hardly said a word to each other over supper. And you did your best to avoid eye contact.”

“Oh, I see. It’s okay to take jabs at me and my nonexistent love life. But yours is off limits,” Brea said, picking up the gauntlet.

“I’m not going to talk about Mason. It’s ancient history.”

“Is it?” Jolene asked with an arch of her brow. “Didn’t look or feel that way to me over supper. The tension in the kitchen was thick as morning fog.”

“I mean it, Jolene. What is all this animosity about? You invited us here.” Valerie felt the pressure building in the room and knew she had to do something to try and diffuse it before things got out of hand.

“And it’s about damn time you two slackers showed up. This is your ranch and I’m tired of making all the decisions about it while the two of you sit on your asses and do nothing.”

“I’ve asked plenty. And you told me no at least five times in the past year.”

Brea looked down at her lap. “I’ve had projects. I’ve been busy.”

“Bullshit. You avoided coming here, just like Valerie.” Jolene turned her gaze to Valerie. “You and your I’m-such-a-busy-doctor routine are just as bad.”

“And she never had time off? Just like you. Everything is more important than coming home.”

“I’ve had about all I’m going to take from you, Jolene,” Brea said, her fingers curling into fists.

Valerie had reached the end of her rope, too. “You must be itching for a fight tonight, baby sister. You need to take a step back and knock this off.”

“Or what? You’ll punch me out? You’ll hurl insults at me? Please. I can kick your ass.”

Brea crossed her arms and moved up next to Valerie. “Are you going to take us both?”

Jolene tilted her head back and offered up a smug smile. “Bring it on.”

Their squabble instantly forgotten, Valerie moved to the other side of the room to help her. “That looks heavy. Let me help you.”

Lila ignored her and dropped the box on the floor, then swept her hands together and placed them on her ample hips. “Now, you three quit bickering with each other and go through this.”

“It belonged to your mother.”

Lila gave her a pointed stare. “If you go through it, you’ll find out. There’s wine and glasses in the bar. Go have a few drinks and remember why you love each other. You’re family. Not enemies.”

Valerie felt thoroughly chastised. “Would you like to stay and hang out with us?”

Lila shook her head. “Some things need to be shared privately among sisters.” With a wink, she turned and walked through the double doors leading out of the family room. “Night, girls.” She closed the doors behind her.

Valerie turned and stared at the dusty box, then up at her sisters. “What the hell is that?”

Jolene shrugged. “I have no idea. I’ll go open the wine.” She went behind the bar, opened a bottle of Chardonnay and poured three glasses, then brought the glasses to them.

“Are we just going to stare at it, or are we going to open it up and look inside?” Brea asked.

Valerie stared down at the box, then again up at her sisters, who looked back at her expectantly. “What?”

Valerie rolled her eyes. “What are you so afraid of? Do you think there might be live snakes in here?”

“Well, no,” Jolene said. “But I still think you should open it.