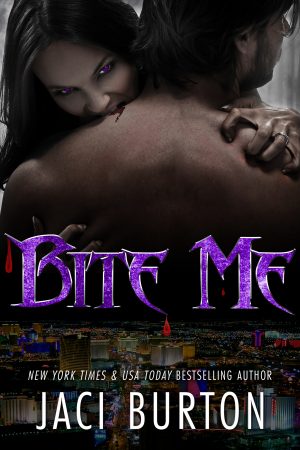 Gina Capelli is approaching thirty and still a virgin, a problem she’s dying to eliminate. She’s shy and a little obsessed about those few extra pounds she carries, but her friends tell her she’s totally cute.

Cute. Ugh. She hates being cute. She wants to be vampy, alluring, mysterious. Which is exactly what she’s going to be at the convention for BITE ME, the nighttime drama about vampires.

She wins a contest that awards her a ticket to the Las Vegas event premiering the upcoming season. The prize package includes a formal dress, makeover and hairstyle. With the new Gina all packaged up and ready to make her debut, she’s bound and determined to get laid tonight. The first guy who approaches her is the one.

And wouldn’t it be nice if that guy could be Deacon Black, the sexy star of BITE ME? Of course, master vampire is just the role he plays on television.